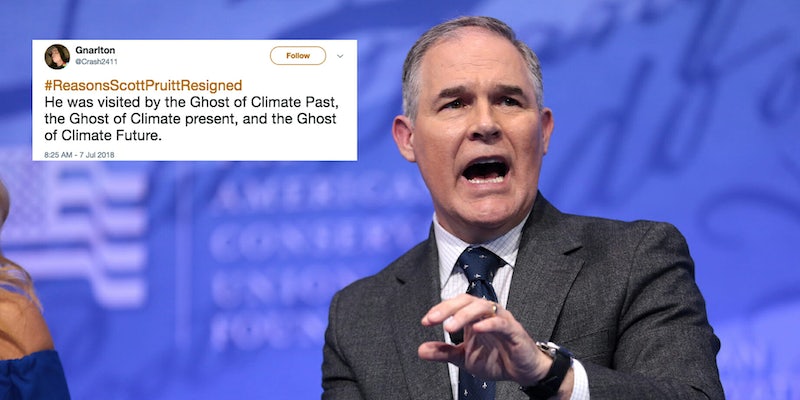 To name a few alleged misdeeds, Pruitt has been accused of abusing taxpayer funds to pay for tens of thousands of dollars worth of first-class air travel, installing a soundproof booth in his office, directing aides to purchase an old mattress from a Trump hotel, purchasing a condo from an energy industry lobbyist below market rate, and trying to get his wife a a Chick-fil-A franchise. Democrats began calling for his resignation earlier this year.

Now that Pruitt has resigned, Twitter is bursting with jokes about the embattled EPA admin.

They would only give his wife a job for $195k

#ReasonsScottPruittResigned after all that money for super duper phone dome, he could have gotten a shoe phone, cheap, on e-bay. pic.twitter.com/e0HEVnnLrb

One of the most visible examples of public pressure against Pruitt was when a woman named Kristin Mink, holding her child, confronted Pruitt inside a restaurant and asked for his resignation.

“This is my son. He loves animals. He loves clean air. He loves clean water,” Mink told Pruitt in a video she posted to Facebook. “Meanwhile, you’re slashing strong fuel standards for cars and trucks for the benefit of big corporations. We deserve to have somebody at the EPA who actually does protect our environment, somebody who believes in climate change and takes it seriously for the benefit of all of us, including our children. I would urge you to resign before your scandals push you out.”

Since then, Mink has praised Pruitt’s resignation and called for more public confrontations with members of the Trump administration.

1) Our voices matter! Speak up every chance you get! Civil servants work for US, our taxes pay their salaries; tell them what kind of job they’re doing!
2) Unless we want another EPA admin dirtying the air & water for the next gen, VOTE THIS NOVEMBER! Midterms matter! #VOTE2018

“Turning up the heat works,” Mink said in an interview with Huffington Post.

President Donald Trump has stated that Pruitt will be replaced by Deputy EPA Administrator Andrew Wheeler.