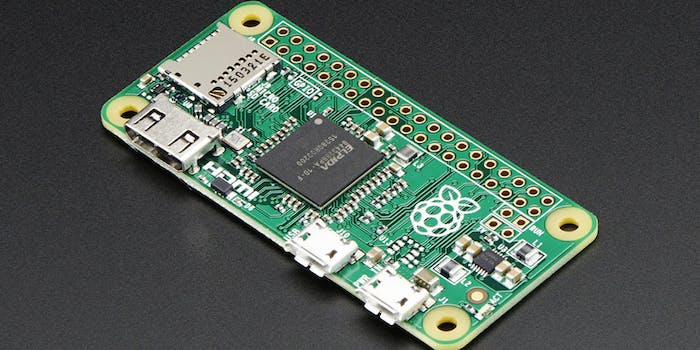 You can buy the new Raspberry Pi Zero for just $5

It's a fraction of what Raspberry Pi's other models cost.

Raspberry Pi is revolutionizing computing and the maker movement, and it just released its cheapest computer yet. You can buy the Raspberry Pi Zero for just $5.

Yes, that’s right: Five bucks will buy you a computer capable of running applications like the learn-to-code program Scratch, and Minecraft, a popular world-building game. But the cheaper price point doesn’t mean it’s got less power. It might be the smallest Pi yet, yet it boasts half a gig of RAM and the same chip used in the Raspberry Pi 1—with a whopping 40 percent more speed.

For comparison, the Raspberry Pi 2, launched earlier this year, debuted with a $35 price tag. Now, for a fraction of that, you can play computer games, power a retro gaming handheld device, hack a cassette player to stream Spotify, program a light show to wow guests this holiday season, or teach kids about hacking and programming in a cheap, accessible way. You can also buy the Raspberry Pi’s official 7-inch LCD touchscreen monitor to go along with the hardware.

The company laid out additional specs in a blog post:

Raspberry Pi is making computing accessible in ways unimaginable just a few years ago. Not only is the computer incredibly affordable, it’s also completely customizable so that people can learn how to program and play with hardware and software.

The Raspberry Pi Zero is already on sale at Pi retailers, though the company says demand will likely outpace the supply they have in stock, so if your favorite retailer is out, be patient. Besides, it’ll make a fantastic stocking stuffer for the tech lover in your life.