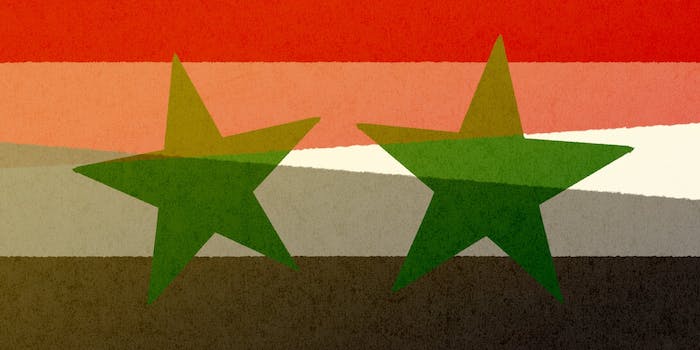 How to beat ISIS, according to a Raqqa Is Being Slaughtered Silently co-founder

'We will all pay the price.'

One day after the 2016 Republican presidential candidates gathered for a debate in Las Vegas, competing over who could take the most aggressive stance against ISIS, Ahmad Mohamed al-Mousa was shot twice in the head by a group of masked assailants for telling the world what it’s like living under the rule of the Islamic State.

Al-Mousa was murdered in the Syrian city of Idlib, a province under the control of a coalition of rebel groups that includes the Al-Qaeda affiliate Jaish al-Fateh, but he is most closely associated with Raqqa.

Al-Mousa was one of the founders of Raqqa Is Being Slaughtered Silently, a news organization comprised of anti-violence activists turned citizen journalists who provide some of the only consistent reporting out of Raqqa, Syria, the capital of ISIS’s self-proclaimed caliphate.

As the people with perhaps the most intimate knowledge of what life is like on the ground in a land controlled by ISIS, these journalists have a message for the West: Carpet bombs are not the answer.

Started by a group of Raqqa citizens shortly after ISIS’s takeover of their city in January of last year, Raqqa Is Being Slaughtered Silently was created as an effort to tell the stories of daily existence under the Islamic State—stories that otherwise weren’t being told.

“[For] three months after ISIS took control … there were a lot of violations and crimes and a lot of bad things ISIS did to the people,” Mohammed Saleh, co-founder of RBSS, told the Daily Dot via Skype. “There were arrests, executions, beheadings, and crucifixions. A lot of things were happening in the city and we noticed that nobody was reporting about it. None in the Arabic newspapers or TV [channels] or in intentional outlets.”

The name reflected Raqqa’s reality at the time of the group’s creation. The city’s population was being slaughtered, and no one on the outside knew anything about it. Since then, with a team covertly reporting in Raqqa and sending the information to another group located in other countries to assemble and post online, they’ve covered skyrocketing food and energy prices in Raqqa, how ISIS fighters are attempting to acquire Viagra, and how airstrikes are blowing up targets in their home city.

“We will not stop. We will continue to expose … all the crimes they are committing against the civilians.”

Saleh, a pseudonym used to protect his identity, and his colleagues have suffered greatly for their desire to serve as counter-balance to ISIS’s steady stream of social media propaganda. Shortly after the group’s founding, a member was killed in Raqqa. Two more were beheaded in Turkey, and ISIS posted a video of the killings online. Saleh said that when al-Mousa’s was kidnapped by ISIS along with four friends-of-friends, the group demanded RBSS stop publication and disclose the identities of all their members inside Raqqa. When they refused, ISIS tied their kidnapped victims to trees and shot them.

Anyone even suspected of collaborating with the group, said Saleh, is immediately put to death.

“They are trying to put a lot of pressure on us. They [want to] send us the message that [no matter where we are] … they can come for us and kill us,” he said. “We will not stop. We will continue to expose … all the crimes they are committing against the civilians.”

‘The object is to kill the ISIS terrorists.’

Saleh, one of the RBSS members who has fled Syria, said he does what he does as a way to ensure everyone making decisions affecting Raqqa’s civilian population has a comprehensive set of facts at their disposal.

That’s why, as he watched video of Republican candidates like Texas Sen. Ted Cruz and retired neurosurgeon Ben Carson explain their strategies against ISIS, Saleh quickly grew frustrated with their responses. Not only did many of the leading GOP candidates display a callous indifference toward the suffering of Raqqa’s civilian population, he argued, but they also didn’t seem to grasp what he saw as the key to dislodging ISIS from its primary stronghold.

During the debate, moderator Wolf Blitzer asked, “Sen. Cruz, you have said you would, ‘carpet bomb ISIS into oblivion,’ testing whether, ‘sand can glow in the dark.’ Does that mean leveling the ISIS capital of Raqqa in Syria where there are hundreds of thousands of civilians?”

Cruz attempted to evade the question, but Blitzer continued to press him. “You would carpet bomb where ISIS is, not a city, but the location of the troops,” Cruz responded. “You use air power … and you have embedded special forces to direction the air power. But the object isn’t to level a city. The object is to kill the ISIS terrorists.”

Later in the debate, moderator Hugh Hewitt asked Carson if he would be willing to order airstrikes against ISIS that, in all likelihood, would result in thousands of civilian casualties. “You have to be able to look at the big picture and understand that it’s actually merciful if you go ahead and finish the job rather than death by a thousand pricks,” said Carson.

“The problem in the West is that they see that Raqqa is the capital of ISIS, so they think that all the people of Raqqa are with ISIS,” Saleh insisted, noting, as Blitzer did, that a large-scale bombing campaign would necessarily result in a large number of civilian casualties. “There are 500,000 civilians living inside the city of Raqqa—it’s a large number of civilians.”

“The problem in the West is that they see that Raqqa is the capital of ISIS, so they think that all the people of Raqqa are with ISIS.”

Saleh added that the region is already affected by daily air strikes from both U.S.-led coalition and Russian forces, which are killing unnumbered civilians and damaging critical infrastructure. “These airstrikes are all affecting the people—especially air strikes that are targeting oil refineries and oil sources. It’s winter and people need oil to cook and keep warm. There are air strikes that affect ISIS, but it affects the people at the same time,” Saleh said.

Saleh argues the ultimate effect of the current strategy, which is largely reliant on aerial bombardment, is actually strengthening ISIS. The fundamentalist group can point to damage to critical infrastructure like water and power facilities, which often leaves Syrians without access to essential services for days on end, as a recruiting tool proving the foreign powers fighting ISIS don’t have the Syrian people’s best interests at heart.

“This is the problem that the West doesn’t understand,” Saleh said. “Bombing only is not enough. Bombing is just making the case worse. “

Instead, he charges, the only way to take down ISIS involves, first, removing Syrian President Bashar al-Assad, whose relentlessly authoritarian rule during the first years of the country’s civil war—and western nations’ reticence to stop him—is what allowed ISIS’s rise.

The importance of removing Assad is something that has divided the two top candidates vying for the Democratic nomination. In the Democratic debate earlier this month, Independent Vermont Sen. Bernie Sanders argued that combating ISIS should take priority over removing Assad, while former Secretary of State Hillary Clinton insisted that both need to happen simultaneously.

The West needs to “support the local Free Syrian Army fighters,” said Saleh. “These are the only guys, the local civilians in Raqqa … [who can take back] their city.”

Saleh contrasted this strategy with the coalition’s efforts thus far, which he argued has relied too heavily on supporting Kurdish forces in the region. “We say the same thing all the time. The U.S. needs to support the FSA fighters with weapons and weapons and with [air strikes],” he said. “The U.S. is saying that Kurdish fighters are the only effective people fighting ISIS. Of course they will be effective, your warplanes come and burn everything to the ground and then they came and there are no ISIS fighters. Of course they will take control of these cities. Do the same with the FSA, and you will see that its effective also. “

In October, the Obama administration announced that it would suspend a $500 million program meant to train fighters in Syria against ISIS militants and instead give money directly to rebel groups already engaged in the fight against ISIS. However, according Saleh’s reading of the conditions on the ground, this tactic has been largely misdirected.

Saleh charged that the problems he saw with the rhetoric in the Republican debate didn’t stem from ignorance. Rather, he viewed it as evidence that U.S. leadership doesn’t actually to see the Assad regime toppled from power. Pulitzer-prize-winning journalist Seymour Hersh’s echoed this assessment in his most recent report for the London Review of Books, based on classified U.S. military documents, which revealed that U.S. intelligence believed the ousting of Assad “would lead to chaos and, potentially, to Syria’s takeover by jihadi extremists.”

“I know why the West doesn’t want to do that,” he said of removing Assad from power. “But the Obama administration is too weak. This is not happening in Syria, and we will all pay the price for that.”