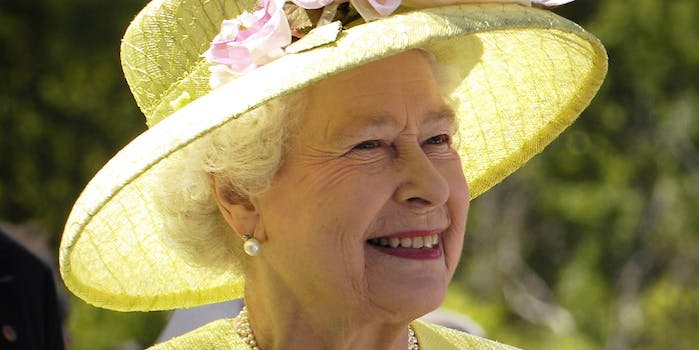 She just has a bad cold.

A fake BBC Twitter account caused panic in the streets of London Thursday night after it announced that Queen Elizabeth II had died. 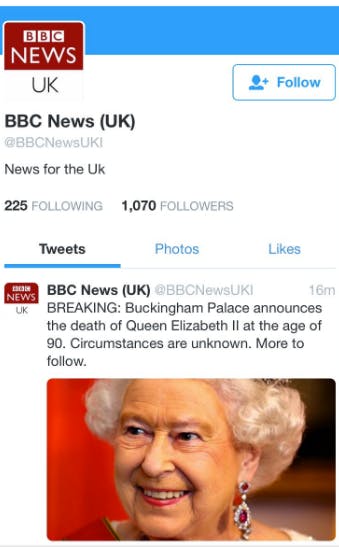 The hoax originated with a Twitter account (@BBCNewsUKI) that carried all the official BBC branding but was unquestionably a fraud. The account has since been suspended by the social media network.

Speculation about the monarch’s general health was sparked over the holiday period when she was unable to attend the Christmas service. It was the first time that the monarch has missed the church service in decades.

Buckingham Palace said that the Queen’s absence from the Christmas celebration was a “precautionary measure” and that she was merely dosed with a “heavy cold,” so there was “no sense of undue concern.” Even still the recent news is likely what allowed the fake report to gain traction.

The Royal family took to their verified Twitter profile this morning to casually quell the rumors and wish the nation a happy New Year.

Thank you to all our Twitter followers for your support in 2016! See you in 2017 #HappyNewYearhttps://t.co/tmZ8pqL4qn

As news that the whole report was a hoax spread across the U.K, users reflected with a mixture of humor and relief:

GTFO DONT MESS WITH QUEEN ELIZABETH. SHE IS ALIVE AND HEALTHY THANK YOU VERY MUCH.

It is so 2016 that we all immediately believed that The Queen was dead because IT'S 2016.

Breaking News: The Queen is Dead… is my favourite Smiths album.