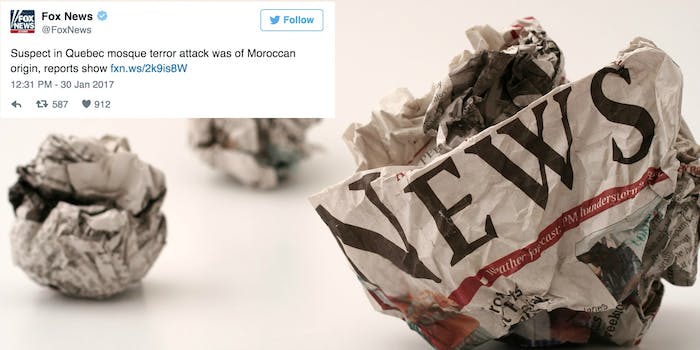 In the small hours of Monday morning, false information presented as facts about the tragic mosque shooting in Quebec rapidly engulfed Twitter.

Fabricated details about the horrendous crime in Quebec City, which left six worshipers dead and more than a dozen others wounded, were promoted by an army of bots and high-profile right-wing commentators. 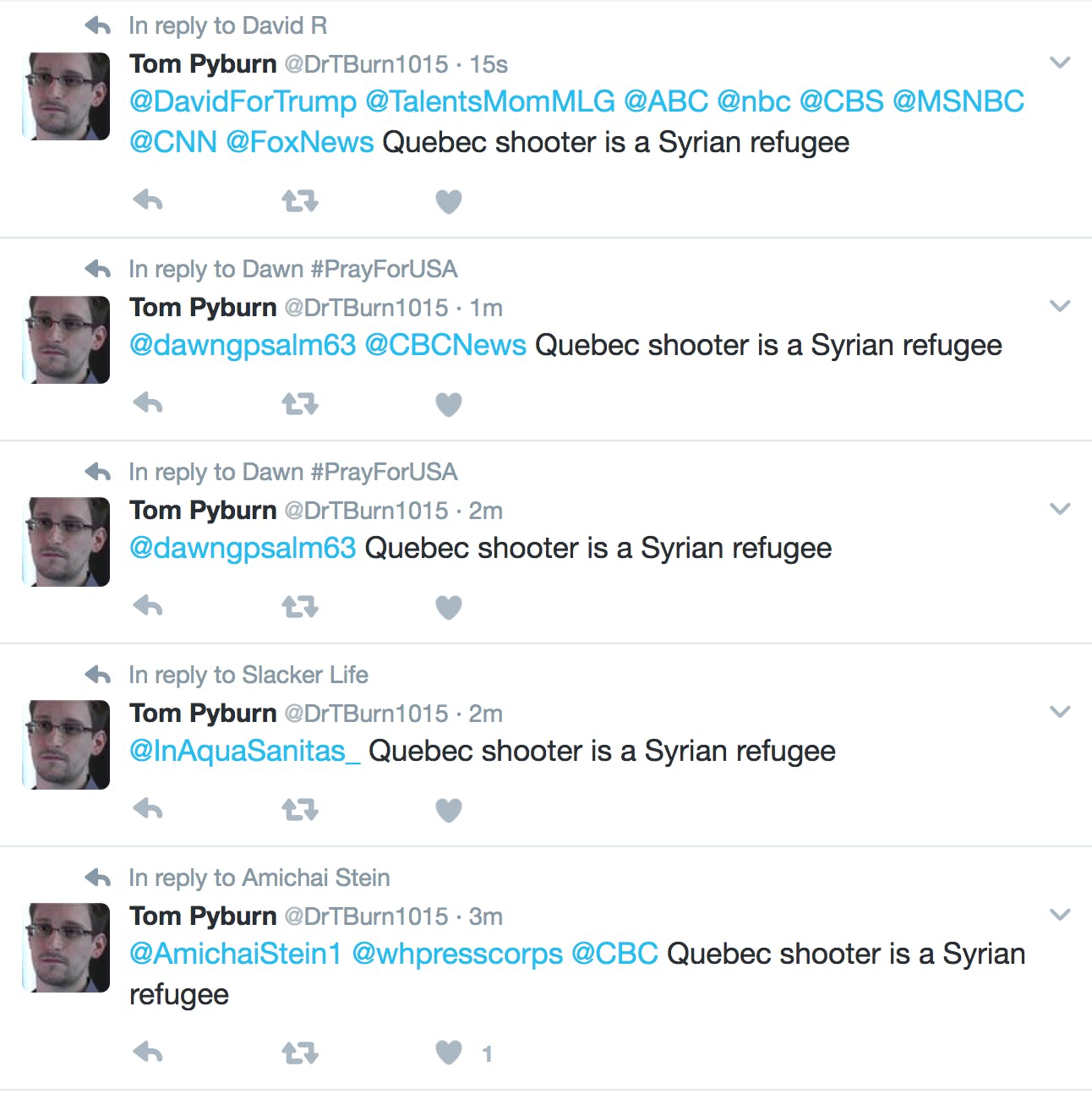 The shooter, they claimed, was a Muslim. First, a Syrian refugee; then, a man of “Moroccan origin,” as Fox News claimed in an article it quietly deleted around noon without correction. (A Moroccan man interviewed by police was actually a worshipper at the Cultural Islamic Center of Québec.)

However, the accused shooter is not a Muslim and he is not a refugee. He was born in neither Syria nor Morocco. The suspect is a 27-year-old white French Canadian named Alexandre Bissonnette, whom an immigration rights group has identified as a far-right internet troll. What’s more, Bissonnette’s Facebook “likes” include, among various celebrities and musicians, President Donald Trump and far-right French politician Marine Le Pen, in addition to a number of other public figures critical of Islam.

But before police in Québec had offered any details about what occurred during the attack, RT News, a state-funded Russian media company, issued an alert that appeared on every page of its website claiming the shooter shouted “God is great” in Arabic while carrying out the murders. Fox News followed suit. The report was wholly unverified, originating from an anonymous tip provided to a Canadian radio station early Monday morning. (“Allahu akbar” is one of the few widely known Arabic phrases in the West and, hypothetically, could have been shouted by the alleged shooter to mock his victims.)

While most Americans were still asleep, a misinformation campaign was being carried out on Twitter that largely targeted users who lean politically to the right. Pamela Geller, a right-wing commentator famous for her “Draw the Prophet” contests and a partnership with a prominent American white supremacist named Richard Spencer, is among the more well-known individuals who deserve credit for circulating the fake news of the Syrian refugee assailant. (Readers may recognize Spencer from viral videos depicting him getting punched in the face—occasionally to a soundtrack.)

In a series of tweets Sunday night, Spencer mocked the victims of the shooting while calling for the deportation of every Muslim in North America.

Among those circulating fake news about the shooting were accounts supportive of Trump and the visa ban he ordered on Friday restricting travel from seven predominantly Muslim countries. Many of the accounts appeared to have no regard for the truth and were instead seizing the moment to inspire hatred toward the Muslim victims. Others appear to be gullible bystanders with their own preconceived biases against non-whites.

Since shooter's at Quebec mosque appear 2B Syrian refugees, we'll see the world respond well to Trump's temp refugee ban. Except for Dems.

The concerted spread of misinformation goes to show that even terrorist attacks targeting Muslim communities can be spun by white nationalists to inflame hostilities towards Muslims and refugees.

This was exemplified by none other than White House Press Secretary Sean Spicer, who inexplicably used the attack—once again, carried out by a Canadian citizen—as evidence of why Trump’s travel ban on Muslim-majority countries was necessary.

“It’s a terrible reminder of why we must remain vigilant and why the President is taking steps to be proactive rather than reactive when it comes to our nation’s safety and security,” Spicer said.