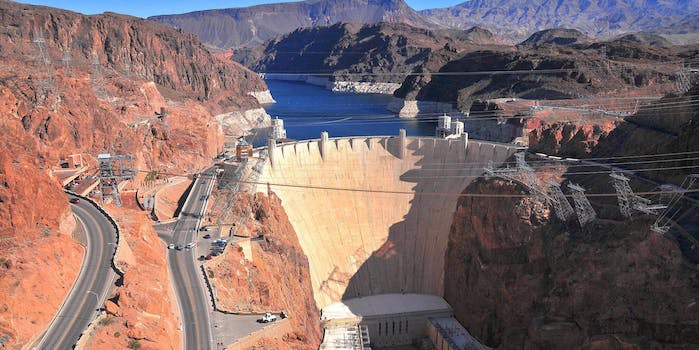 Matthew Wright's sentencing is scheduled for next month.

A follower of the QAnon conspiracy theory has pleaded guilty to making a terrorist threat for blocking a bridge near the Hoover Dam with a homemade armored vehicle.

The Arizona Republic reports that yesterday Matthew Wright, 32, pleaded guilty in Arizona state court to the terrorism charge and two other felony counts of fleeing law enforcement and aggravated assault. Sentencing guidelines for the charges dictate that he’ll serve less than a decade in prison.

According to the Republic, the charges stem from a June 2018 incident in which Wright parked his van, loaded with weapons and 900 rounds of ammunition, across the lanes of a bridge over the Colorado River on the Arizona-Nevada border. The bridge is less than a mile from the dam.

During the ensuing standoff, Wright held a sign outside the vehicle that read, “Release the OIG report,” apparently referring to a report by the Office of the Inspector General about the FBI’s handling of the 2016 investigation of Hillary Clinton’s emails.

The OIG, in fact, released this report the day before Wright drove onto the bridge.

The report proved anticlimactic for QAnon followers, who’d hyped it as proof of the conspiracy against President Donald Trump they believe exists. They now believe there is a second, secret report that proves that top federal agencies conspired to stop Trump from winning the 2016 election. This nonexistent report seems to be what Wright wanted released.

After an hour, Wright drove to the Arizona side, where law enforcement had laid out barbed strips to flatten his tires, the Republic reports. Wright continued driving on flattened tires for several miles and was ultimately apprehended when he got stuck in a narrow canyon.

In letters he later sent to multiple federal and state law enforcement agencies from jail that month, the outlet continues, Wright, a Marine Corps veteran, wrote that he was motivated by passion and patriotism, and denied that he meant any harm.

“I understand that the evil and corruption is limited to a select few in power and that the greater good is doing its best to combat this,” he wrote. “I never meant harm to my brothers and sisters. I simply wanted the truth on behalf of all Americans, all of humanity for that matter.”

He also invoked the QAnon slogan, “For where we go one, we go all,” often shortened to WWG1WGA.

QAnon followers believe that Trump is leading an effort to oust a satanic pedophile cabal from power. They believe that many prominent Democrats, such as Barack Obama and George Soros, as well as members of the Hollywood elite like Tom Hanks, are part of a “deep state” conspiracy that engages in child sex trafficking and drinks the blood of children.

The 2016 Pizzagate hoax, a precursor to QAnon, is among the conspiracy theories its converts believe.

Other QAnon followers have been arrested for crimes allegedly committed in furtherance of exposing what they believe is a global conspiracy.

The same day Wright sent the letters to law enforcement, the Republic reports, he wrote one to Trump.

“I believe I did not represent the American people to the best of my ability and they deserve nothing but the best,” Wright wrote.

“That is why we elected you Commander In Chief, in spite of those whom I will not name that were attempting to obstruct our voice.”

Wright’s sentencing is scheduled for March 4.