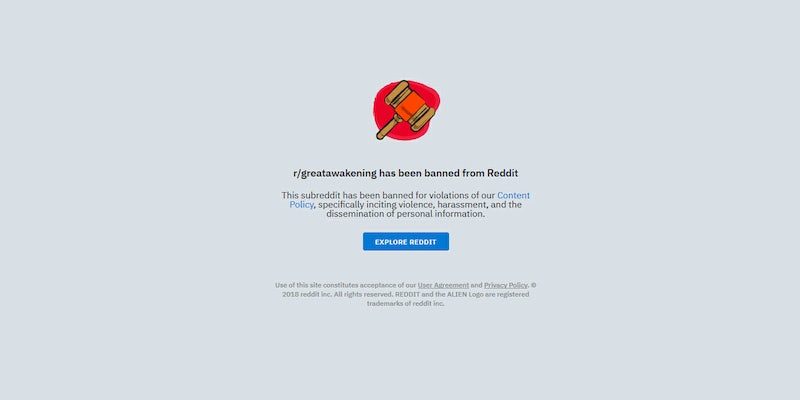 It's the second forum to have been banned since the conspiracy launched.

Reddit took down r/GreatAwakening, its popular QAnon subreddit dedicated to the government insider conspiracy popular on the nether reaches of the internet.

Breaking (?!?): #QAnon reddit forum r/greatawakening has been pulled down for inciting violence. I guess all those fascism-embracing posts about eliminating and executing enemies were a bit much, even for reddit.https://t.co/TNqpWfT0EE

In the announcement banning the subreddit, Reddit used the same language it has previously used to address subreddit bans—that the forum was “inciting violence.”

In recent days, the forum had become obsessed with the death of Sen. John McCain (R-Ariz.) and the final straw for Reddit might have been Great Awakening’s continual pushing of a hoax story positing that McCain was actually executed for treason by the government. In this conspiracy theory, Ohio Gov. John Kasich (R) accidentally let it slip in a CNN interview by saying McCain was “put to death” rather than “put to rest.”

While Q never mentioned the story, it got extreme traction on Great Awakening, where numerous threads sprang up, with many getting pulled down quickly. The story had no mainstream footprint because it was clearly based on a slip of the tongue, but it seemed like a clear example of the movement extolling extra-judicial violence and the execution of a suspect without trial.

#QAnon believers are frothing over a clip of John Kasich saying "it's been 24 hours since John McCain was put to death." They think it's confirmation he was executed for treason, and his cancer was fake.

Great Awakening is the second QAnon-specific forum to be banned by the platform.

In March, Reddit banned another QAnon-centric forum, r/CBTS_Stream, for “encouraging or inciting violence and posting personal and confidential information,” a similar reason given for the ban of r/GreatAwakening.

The r/CBTS_Stream subreddit, which stands for “Calm Before The Storm,” had more than 20,000 subscribers at the time of the ban, who would discuss the cryptic QAnon posts.

Reddit also banned a backup of the subreddit, r/The_GreatAwakening.