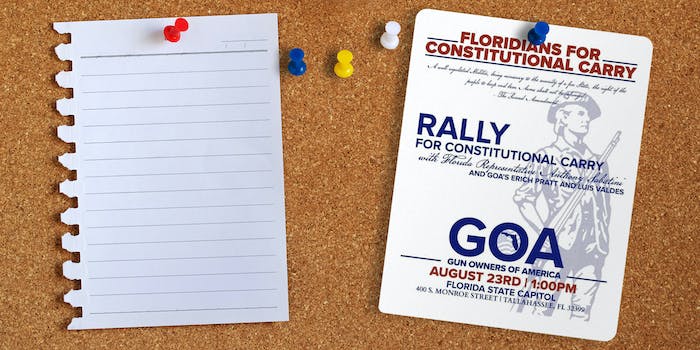 Things are maybe not what they seem.

One of the main QAnon Telegram channels recently broadcast a dire warning. An upcoming demonstration to expand gun rights in Florida could be a false flag, they claimed, hinting that violence is possible.

“Hopefully I am wrong… but [I] have a really bad feeling about this one,” Q Alerts – Q Drop Alerts wrote to their 55,000 Telegram subscribers on Tuesday. They claim that an upcoming Gun Owners of America demonstration supporting Floridians carrying concealed weapons without a permit might be targeted by a shadowy group of “agent provocateurs” for a false flag operation.

Gun Owners of America did not respond to request for comment.

Conspiracy theorists typically use “false flag” to refer to mass shootings or other large-scale violent events like the Capitol riot, which they believe the government secretly carries out to further an agenda. The warning twice references the Jan. 6 riot.

The implication is secret government agents may try to turn the riot violent to demonize gun rights activists.

This warning is based entirely on the hunch of whoever runs the Q Alerts – Q Drop Alerts channel. It borrows heavily from the QAnon playbook that’s proven so successful over the years: Make people feel persecuted, give them an enemy, and something to anticipate and fear. If it gets the opposition to pay attention, all the better.

That’s precisely what happened after an outspoken QAnon opponent tweeted about Q Alerts’ warning with one of their own.

In comments and quote tweets, followers of Jim Stewartson fretted and tagged law enforcement agencies. “Shouldn’t the FBI, the DOJ be preparing to quash any violence?” fretted one. Another asked, “Know anyone who’s purchased thousands of rounds of ammunition lately?”

Stewartson and his fans seem to be misinterpreting the post, saying QAnon promoters “expect violence,” implying they were looking to turn the rally violent. The post though is squarely saying they think the government might provoke action at the event.

QAnon is a conspiracy theory that the planet is controlled by a cabal of cannibalistic pedophiles who worship Satan.

For all its strangeness, QAnon exploded in popularity based on its effectiveness at fomenting division, exploiting tragedy, and making predictions couched in disclaimers. That way if it was wrong, well, you misinterpreted it. If it was right, or could possibly be right, that’s just one more reason to Trust The Plan.

Q Alerts’ warning about the possibility of violence at the upcoming gun rights rally in Florida is more of the same. And the mere fact that Q Alerts posted it gives it the potential to morph into something real. Unlike many prominent voices in QAnon, Q Alerts is remarkably restrained in their communications, which has earned their followers’ trust. On Telegram, it long exclusively posted links to Q drops. When Q went silent, so did it. In May, it to linked to “new intel,” only to walk it back the next day because it didn’t have the hallmark of what they consider authenticity.

“Unless Q verifies it with their ‘trip code’ we at QAlerts.app are considering the post bogus,” they wrote. “It has been deleted from our site. Our site will now only consider a post to Q’s private read-only board valid if they use their trip code.”

Q Alerts also posted the warning about a potential false flag at the gun rally to the 72,000 people who follow their verified Gab account. Commenters were spooked.

“Nothing like a crowd full of 44 magnums to stop any FF dead in its tracks. Aug 23 is pushing the window on Zero Day (IMO), so Antifa might not even have the opportunity,” wrote one.

The Floridians for Constitutional Carry rally is a real event hosted by the Florida branch of Gun Owners of America (GOA), a large, pro-gun organization akin to the National Rifle Association. The national organization has 1.5 million Facebook followers; its Florida branch has a comparatively small presence of just 650 Facebook followers. Featured attendees at the rally include GOA leadership and Florida state Rep. Anthony Sabatini, a Republican who’s running for Congress.

For all of Q Alerts’ dire predictions, the Floridians for Constitutional Carry rally isn’t likely to attract much controversy or even attention. It’s scheduled for a Monday afternoon in late August when the capital will be relatively quiet. Thus far, on the event’s Facebook page, only 12 people have indicated that they plan to attend. The rally will probably be an hour or so of speeches delivered to a rapidly overheating group that wouldn’t even fill the first few rows of a school bus, carrying a few signs bearing the hastily scribbled text of the Second Amendment, “Go GOA!,” and the like.

But in the mind meld of QAnon, Floridians for Constitutional Carry is much more than a gathering of a few like-minded folks talking about bullets or bump stocks. It’s ripe with the possibility of violence, a chance to be a hero. Anyone who attends must be hypervigilant to watch for infiltrators in their midst.

“I know they won’t cancel so, prayerfully plenty of people there will have eyes on and if agent provocateurs make a move, they will have the wisdom to realize that despite their appearance (patriot, Trump supporter, etc.), that they are in fact not that. Hopefully Patriots can peacefully stop any FF’s,” Q Alerts writes, ominously.

“See something say something! Record everything.”

It’s all the ingredients that tantalize QAnon followers: common cause, common enemy, and a chance to save the day.

It’s been nine long months since Q, the mysterious purported government insider who gave rise to the conspiracy theory with cryptic posts on 8chan, then 8kun, vanished from the web. And it’s been seven months since former President Donald Trump, who was supposedly fighting the cabal, was unceremoniously deposed from office.

Without fresh meat to feed the troops, these people—including whoever runs Q Alerts—are staring down the barrel at increasingly diminishing returns until one day in the not-so-distant future, QAnon gives way to the next big thing.

So to shake things up and give the faithful something to be excited about again, it actually makes a strange kind of sense to post about a sinking suspicion that a virtually unheard of gun rights rally is going to be far more cataclysmic than a small group of men and a woman or two melting in the Florida sun while a politician prattles on about the doctrine of original intent. It’s a chance to confront your enemies, whoever they may be.

And if it tricks those enemies into getting little egg on their face by blowing the threat out of proportion, all the better.