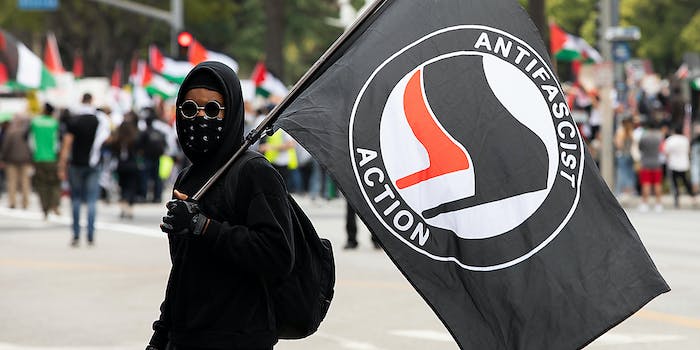 How fears of the ‘antifa apocalypse’ set the stage for QAnon

The two are inextricably linked.

The most impactful, incorrect conspiracy theory in recent years is QAnon, which spread like wildfire and has yet to peter out.

But QAnon would never have caught on if not for another false belief that, right before QAnon came along, took the extremely pnline right by storm: the antifa apocalypse of Nov. 4, 2017.

In the antifa apocalypse, the far left—the conservative rumor mill claimed—was going to start a wave of riots aimed at murdering white Christian Trump supporters en masse. Online, right-wing outlets and influencers warned that every conservative should know about these plans, make arrangements for their families’ safety, and above all, stay vigilant.

The rumors sparked a highly charged atmosphere of fear and anticipation. Without that atmosphere, QAnon, which sparked in the midst of the panic, may have been snuffed out.

At heart, QAnon is an apocalyptic movement. Q’s message is that the world is run by a cabal of Satanist pedophiles who are responsible for all the evil in the world. But in QAnon lore, the Satanists will soon be swept away in an event called “the Storm,” when President Donald Trump was to have them arrested, tried, and executed. After this, the old, corrupt world we’ve lived in will be gone. In its place, there’ll be a new age of peace, prosperity, and patriotism.

Absurd as it may sound, this is a conspiracy that swept up much of the far-right during Trump’s presidency.

Such movements can only catch on at moments of high social anxiety. And QAnon began its life right where much of the online anxiety about the antifa apocalypse was festering: 4chan.

The wave of conspiratorial fear about mass antifa riots on Nov. 4 predated QAnon and had a clear impact on Q’s earliest claims. Q’s first posts date to Oct. 28, 2017, and predict the imminent arrest of Hillary Clinton followed by “massive riots organized in defiance,” which would be quashed by the National Guard and the Marines.

“Public riots are being organized in serious numbers,” Q claimed on Nov. 1, “in an effort to prevent the arrest and capture of more senior public officials.” Civil unrest “will be dealt with swiftly” during the mass arrests, Q wrote on Nov. 2, but their followers should “be diligent—phone numbers will be provided if you witness an uprising.”

Nothing happened, but Q’s first posts came on 4chan’s /pol/ board, a highly conspiratorial right-wing space. Anxiety and rumors about Nov. 4 were common on /pol/ and profoundly influenced people’s willingness to accept Q’s story. As QAnon was predicting big “habbenings,” people on the board were simultaneously listing the last date to legally purchase firearms before antifa began marching.

The two are inextricable.

If you do remember the antifa apocalypse, it’s probably from Krang T. Nelson’s satirical tweet making fun of the right wing’s panic: “Can’t wait for November 4th when millions of Antifa supersoldiers will behead all white parents and small business owners in the town square.” 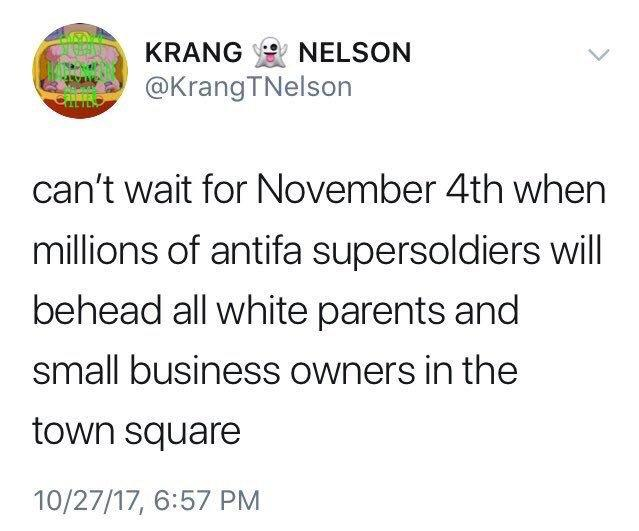 Or maybe you remember that the Gateway Pundit reported on it several days later as if it were actually true.

But by the time the panic burst into the mainstream memes, it had been building among the right-wing for several weeks.

So how did it? Well… Comrade Bob.

The Revolutionary Communist Party is a small group that can fairly be described as a cult of personality; for this reason, it’s widely mocked and shunned by other left-wing groups. Its leader is an elderly gentleman named Bob Avakian.

After the election of Trump, Avakian’s group created a spinoff organization called Refuse Fascism. In early August of 2017, Refuse Fascism put out a call for mass protests against the Trump administration, set to begin on Nov. 4, 2017.

The movement’s dream was that the protests would swell into a nationwide “Occupy”-style protest that would somehow “drive this regime from power.”

And in the conservative imagination, communism and antifa are essentially the same. So it was a short leap from “Revolutionary Communists are calling for mass protests in several major cities” to “antifa is going to stage an uprising in those cities.” Soon, rumors and panic about the coming antifa uprising spread through the right-wing internet like wildfire.

Outlets with names like “Anon News” were writing about the “ANTIFA website planning nationwide anarchy” as early as Aug. 27, 2017. But the panic really started with a viral video made on Aug. 30, 2017. In the since-deleted video, a YouTuber named Jordan Peltz—who Snopes would later identify as a bail bondsman and bounty hunter, but who dressed like a cop—warned viewers that “they are calling for an open civil war … If you’re white, if you’re a Trump supporter, you’re a Nazi to them … and it will be open season on you.”

Antifa, he went on to claim, would kick off civil war by attacking the police.

The claim had legs in the conservative infosphere. On YouTube, a video titled “Civil unrest / nov. 4th” racked up over 540,000 views, while the autoplay list helpfully cues up titles like “We gonna shoot em Nov 4” (250,000+ views), “You’ll be Sick After Hearing what Antifa Has Planned for Nov. 4th” (295,000+ views), and an interview with Peltz himself clocking in at over 1 million views.

Right-wing media giants—especially the more conspiratorial ones, like InfoWars—got in on the act. “On November 4th the Antifa Insurgency Against Donald Trump and His Supporters Will Begin.” read an InfoWars headline on Nov. 1. The article went on to claim that “radical leftists have been cultivating ties with Islamic terrorists.” (“Amazingly,” it also says, “there are some out there that are claiming the radical left is not planning anything for November 4th.”)

A panic was in place. And it wasn’t one that was hard to believe even in less conspiratorial circles. Right-wingers have been convinced that America is on the brink of a communist takeover for roughly a century, from the First Red Scare immediately after World War I to the Cold War and McCarthyism. The current obsession over the rise of “cultural Marxism” isn’t much different.

So it comes as no surprise that on a hive of far-right conspiracy theories like 4chan’s /pol/ board, users swiftly concluded that Nov. 4 was a plan “to shut down the US government.”

As the day came closer, 4chan was overrun with speculation about Nov. 4. And while 4chan is an ocean of shitposts and sarcasm, many users were genuinely afraid. One wrote, “I actually purchased my first box of 9mm ammo yesterday because of all this Nov 4th talk.” In the same thread, another user said, “Nov. 4 is why I bought another pistol.”

“REMINDER: Tuesday the 24th is the last day to purchase … a firearm in California to get it before November 4th,” wrote another user. “Do your research now. Get the best one you can afford, and take it to a range. Better safe than sorry.”

But fear wasn’t the only emotion on display in threads. Plenty of users were bloodthirsty. The board was rife with fantasies about law enforcement, the military, or conservative civilians gunning down antifa in the streets. In the words of one user, “Everyone wants Nov. 4th to happen so we can finally put you all in the dirt.”

In this frenzy, QAnon was able to develop a following largely by speaking to the board’s collective anxiety about the upcoming antifa apocalypse.

Q did this by pushing a surprisingly flexible narrative, delivered via long posts that were full of leading questions. On the one hand, Q suggested there would be genuine riots after Trump dismantled the Deep State and arrested Hillary Clinton, and that these would be put down by the National Guard and the United States Marines (“Who controls the NG?” asked one early post, adding: “Can the NG work in coordination with the Marines?”).

This appealed to the segment of the audience that was eager to see blood in the streets. But for people who were more anxious than eager—people who thought they really might come under attack—Q had a reassuring message: the coming riots were a part of Trump’s plan. They would serve merely as a pretext for martial law and the mass arrest of Trump’s opponents.

On Oct. 29, 2017, Q invited readers to “think about why Antifa plays right into the plan,” and on Oct. 31 they responded to speculation that “Trump has had [military intelligence] infiltrate Antifa and all the dissenting local govts” by writing: “Well done. Picture being painted.”

The antifa apocalypse was the kind of 3D chess QAnon came to be known for claiming Trump was playing.

As well, the apocalyptic message—that the Satanic Deep State was about to be swept away in a spasm of violence, after which Trump would reign—was superbly well suited to a historical moment when conservatives were worried about mass social convulsions in the immediate future and wanted reassurances.

QAnon grew as a balm to soothe fears, a security blanket for frazzled right-wing conspiracy theorists who latched onto it and have never let go.

When Nov. 4 came, there was no antifa apocalypse. And none of Q’s predictions came true. But Q’s followers didn’t seem to care. Having done the job to assuage them, when nothing happened, they still trusted in Q. Followers found excuses to believe.

Q’s new story—which is still the QAnon movement’s storyline right down to the present day—was that, instead of clearly visible and well-covered arrests taking place in broad daylight, there was a secret war between Trump and the Cabal. Only by following Q could anons get the real scoop. Did Trump and his secret team somehow prevent it? It didn’t happen, so it wasn’t hard to believe that.

In the ensuing months and years, the extremely online right mostly forgot the antifa apocalypse. For that matter, most Q believers came to the movement long after November 2017. They either never heard of the panic or barely recall it. But almost certainly, QAnon wouldn’t have caught on without it.

Al Jones is the pseudonymous founder of the Q Origins Project, which examines the roots, spread, and functions of QAnon culture past and present.