Is QAnon afraid of breaking an innocuous law?

When he first started posting his cryptic “intel drops,” supposed Trump administration insider “QAnon” would deluge 8chan with dozens of messages every day. These Q posts would rarely stop, with the only break in posting between October and February longer than three days coming for Christmas.

But after February, the poster began taking longer and longer pauses between drops. For example, in July, Q took his longest time away, going three weeks without a post, only to come roaring back to post 11 days in a row.

During these breaks, which have been getting longer and more frequent, Q believers on Twitter and Voat—the places the anonymous “insider” is most discussed—tend to make hyperbolic excuses for where Q is and why “the Great Awakening” he’s been prophesying hasn’t taken place.

Most of these excuses are nonsensical, trying to grab random news headlines and massage them into fitting with Q’s narrative.

That long absence in July was explained away as Q preparing for the findings of U.S. Attorney John Huber’s investigation into FISA abuses—an investigation that’s still going on, and that has released no findings so far.

Where are the Q posts?

As of this writing, Q hasn’t posted since Oct. 9. And the latest harebrained reason for Q’s absence and no deep state pedos being arrested: it’s to not violate the Hatch Act, the federal law that prevents government employees from endorsing political candidates or doing anything to affect an election.

The idea seems to have sprung from an 8chan post on Oct. 13, just a few days after Q stopped posting, and got more traction when it was reposted on the QAnon discussion forum on Voat.

“THE HATCH ACT PREVENTS ARRESTS BEFORE ELECTION” blared the post. “There will be NO ARRESTS before the ELECTION (11/6/2018), at least from [Attorney General] Jeff Sessions/DOJ. There CANNOT BE ARRESTS, prosecutions, or unsealed indictments right before the ELECTION by DOJ or its constituent parts,” claims the anonymous poster.

“The Hatch Act (5 U.S.C. §§ 7321-26) would prohibit the timing of arrests to affect an election. […] There would be no doubt that, say, arresting Crooked Hillary this week or next week would be the use of official authority to affect the result of an election. There is no way Sessions would even risk creating the appearance of impropriety, let alone commit an outright violation of the Hatch Act.”

Another popular Voat thread, posted by “Fat Butted Man,” claims that as a federal employee, Q is beholden to the Hatch Act, and must stay silent.

“We all know that Clinton and Obama shouldn’t have used government agencies to influence the 2016 election,” the post posits. “The President OBEYS THE LAW and does not want to be accused of doing the same thing. I don’t think Q will post again until AFTER the mid-term elections.”

The theory that Q’s silence/the lack of arrests is due to the timing of the midterms and the Hatch Act isn’t just a crank Voat notion. It’s also a crank Twitter notion, with the idea seeming to take off with Q believers desperate to figure out why nothing has happened. 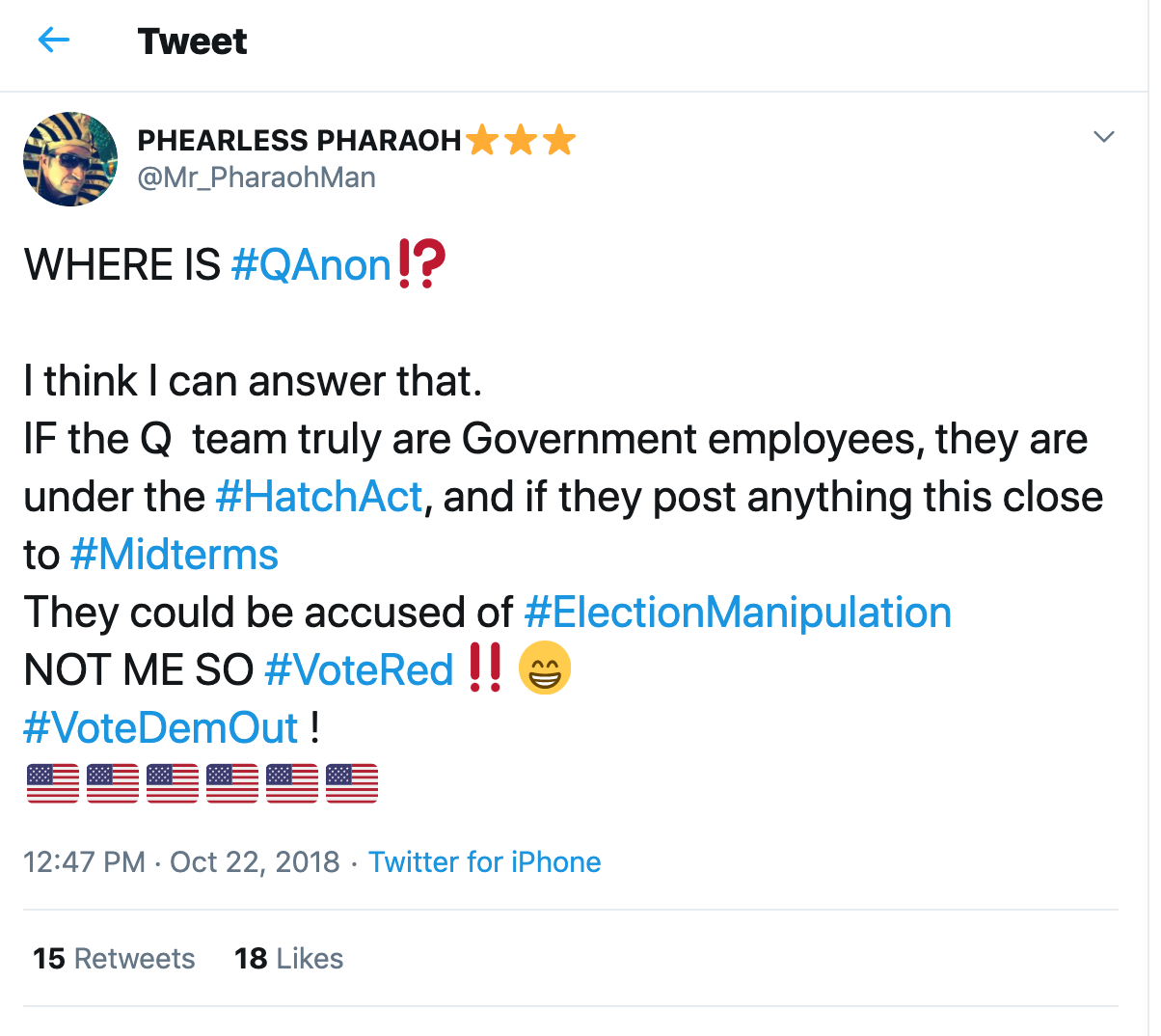 Just saw this on Voat . not real familiar with the hatch Act, but we may be waiting for arrests until after the Mid-terms…#QAnon pic.twitter.com/4koFHcrnCo

Even Q himself has alluded to the frustration felt by believers that no arrests have taken place.

That Oct. 9 post was a sort of “general statement” regarding the “extreme fatigue and frustration re: the wheels of justice [slow].”

It seems much more likely that Q believers are trying to make themselves feel better with outlandish theories than speculating on a real thing that’s actually happening.

For one thing, the Hatch Act has nothing to do with the Department of Justice. It’s a law relevant to the civil service, not law enforcement. If someone is going to be indicted near an election, the DOJ is going to do their job without worrying about potential impact on that election.

While there is a general tradition in the Department of Justice that indictments shouldn’t be handed down in a potentially political case near an election, this “60-day rule” is not a law, nor is it even a codified rule. It’s also been broken many times—with nary a peep related to the Hatch Act.

For example, the Hatch Act didn’t prevent James Comey’s letter to Congress just before the 2016 election declaring the FBI had “learned of the existence of emails that appear to be pertinent to the investigation” into Hillary Clinton’s server.

Further evidence that the QAnon community is giving up hope of seeing any high level arrests of the deep state or cabal in October.

The newest excuse is that arrests won't happen because arrests this close to the election would be a violation of the Hatch Act. pic.twitter.com/AyeBK9TeeO

It could be argued that no federal employee has ever made as much of an impact on an election as Comey did, and despite op-eds and complaints alleging that Comey’s letter did violate the Hatch Act, nothing came of it.

And Trump’s team has never shown any regard for that particular law. Hatch Act violations have been fairly common and rarely punished since he took office. Trump staffers Dan Scavino and Kellyanne Conway, as well as former UN Ambassador Nikki Haley, have all been warned about violating the Hatch Act by stumping for Republicans.

Conway has been in hot water with the Hatch Act several times, violating it twice with her endorsement of Roy Moore. While she was susceptible to punishments ranging from a small fine to being fired, ultimately nothing happened.

This could be why even other Q believers aren’t accepting the Hatch Act as an excuse for the lack of Q posts.

“There is absolutely nothing in the Hatch Act that would prohibit deep state arrests,” wrote one Voat user, while another declaring “I doubt the Hatch Act was intended to make law enforcement officials go on vacation every election season because doing their regular jobs might be perceived as interference.”

The theory that Q is being silenced by the Hatch Act also would rule out another believer theory: that Trump is actually Q. As Trump has made clear many times, the president is exempt from many of the rules that constrain the rest of the federal government, including the Hatch Act.

But most Q believers took it in stride. The arrests are coming, they repeat over and over. This is just a timing issue, and will be resolved once the “red wave” elevates more #MAGA conservatives into office after the midterms.

Once that doesn’t happen, look for a new round of excuses to explain away that failure as well.