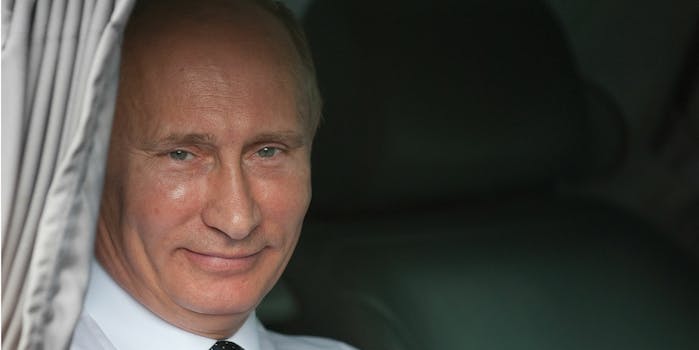 Putin ridicules the U.S., blames it for ‘WannaCry’ cybercattack

The president of Russia says the United States is always looking for someone to blame.

Russian President Vladimir Putin slighted the United States for creating software that is now being used to infest hundreds of thousands of computers in more than 150 countries.

“As for the source of these threats, Microsoft’s leadership stated this directly, they said the source of the virus was the special services of the United States,” Putin said at a conference in Beijing.

He was referring to a blog posted over the weekend by Microsoft President Brad Smith, which confirms the malware being used was developed by the U.S. National Security Agency (NSA).

“We are fully aware that the genies, in particular, those created by secret services, may harm their own authors and creators, should they be let out of the bottle,” Putin said, according to Russian state-owned news service Tass.

Putin also said he wants to discuss cybersecurity issues with the leaders of other nations on a “serious political level.” Russia was hit harder than any other country during last week’s “WannaCry” attacks, though damage appears to have been kept to a minimum.

36,000 detections of #WannaCry (aka #WanaCypt0r aka #WCry) #ransomware so far. Russia, Ukraine, and Taiwan leading. This is huge. pic.twitter.com/EaZcaxPta4

“There hasn’t been any significant damage for us and our agencies, banks or healthcare system,” Putin said. “But in general this [cyberattack] is serious and there is nothing good here, this arouses concern.”

The malware tools used to spread the “WannaCry” ransomware are said to have been created by the NSA, and leaked by a group that calls itself “the Shadow Brokers.”

Putin claims to have proposed an agreement with the U.S. to cooperate against issues of cybersecurity, but says the Obama administration failed to agree to the terms: “Back last year we invited our U.S. partners to look into cybersecurity matters and even to conclude a corresponding inter-governmental agreement on this issue. Regrettably, our proposal was rejected. Then the previous administration said it was prepared to get back to our proposal, but nothing was done in practice.”

The president said Russia was not behind last week’s attacks, while ridiculing the United States.

“This reflects the reality in the best way on this issue, and this is that they [the U.S.] always look for someone to blame where there isn’t anyone guilty,” he said.

“WannaCry” quickly became the largest ransomware attack in history after dozens of countries reported being infected by the malware. Hospitals in the U.K., FedEx, Renault, and Telefonica were among hundreds of companies targeted in the incident. It was spread through a flaw in older versions of Windows that have since been patched.