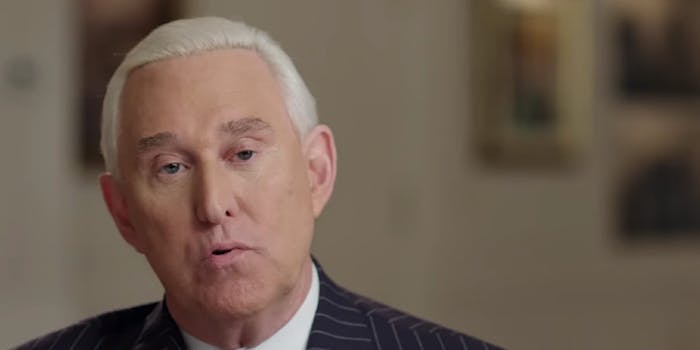 Stone pled not guilty to lying to Congress and witness tampering in Special Counsel Robert Mueller’s investigation of Trump campaign-Russia collusion allegations in the 2016 U.S. election.

Last Thursday, Stone appeared in court over a since-deleted photo posted to his Instagram account of District Judge Amy Berman Jackson beside what appeared to be crosshairs.

Stone said that he thought the crosshair symbol was a Celtic cross and went on to blame one of his volunteer social media staff for the picture, although could not recall who exactly was behind it.

When pressed by a prosecutor, Stone was able to name a few of his volunteers who he said did “a lot of the clerical work” for him—Enrique Tarrio, Tyler Whyte, Jacob Engels, and Rey Perez. All the men were identified as members of the controversial right-wing chauvinist fraternity the Proud Boys, showing Stone’s connection with the group.

At the close of the hearing, the judge imposed a gag order on Stone, limiting what he and his associates could say in public and on social media about the ongoing case.

BuzzFeed News, however, reports that even after the gag, which included the men identified by Stone in court, they continued to speak out in his defense and discuss the trial online.

Perez blasted the “liberal media” on Twitter and accused them of trying “to spin #RogerStoneArrested into evidence of #RussianCollusion.”

“It only shows our innocence and their evil deeds,” he wrote, “what a bunch of sore losers.”

Engels tweeted out the hashtag #RogerStoneDidNothingWrong, while Proud Boys’ chairman Tarrio sported the same slogan on a T-shirt to one of President Donald Trump speeches last week.

Both Perez and Engels appear to now have had their Twitter accounts suspended. Twitter suspends users who associate with violent extremist groups, which the Proud Boys are considered to be. It is an accusation the group denies.