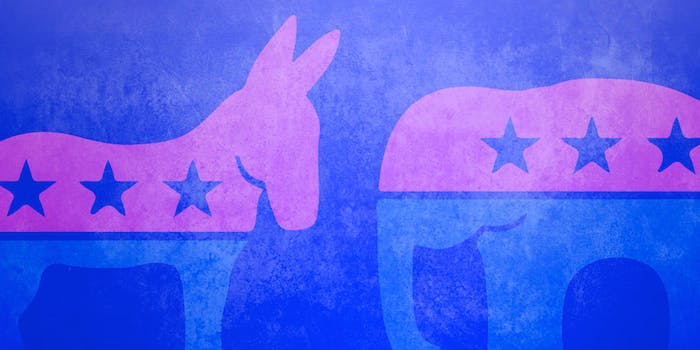 PredictIt is about to become the largest prediction market in the U.S.

That’s the idea behind prediction markets, websites where you can bet money on anything from the outcome of an election to the result of war. These markets get the outcomes right more often than polls or pundits ever do—an important thing to remember as we dive head first into 2016 election season.

Sen. Rand Paul (R-Ky.), who announced the official start of his presidential campaign on Tuesday, is a major underdog according to the prediction markets.

Paul sits below former Florida Gov. Jeb Bush, who leads the charts, as well as Wisconsin Gov. Scott Walker, and Sen. Marco Rubio (R-Fla.). Paul currently has a 25 percent chance to win the Republican nomination, according to the bettors at PredictIt.com. That means you can bet 25 cents on a Paul victory to potentially win 75 cents if the underdog ends up on top. 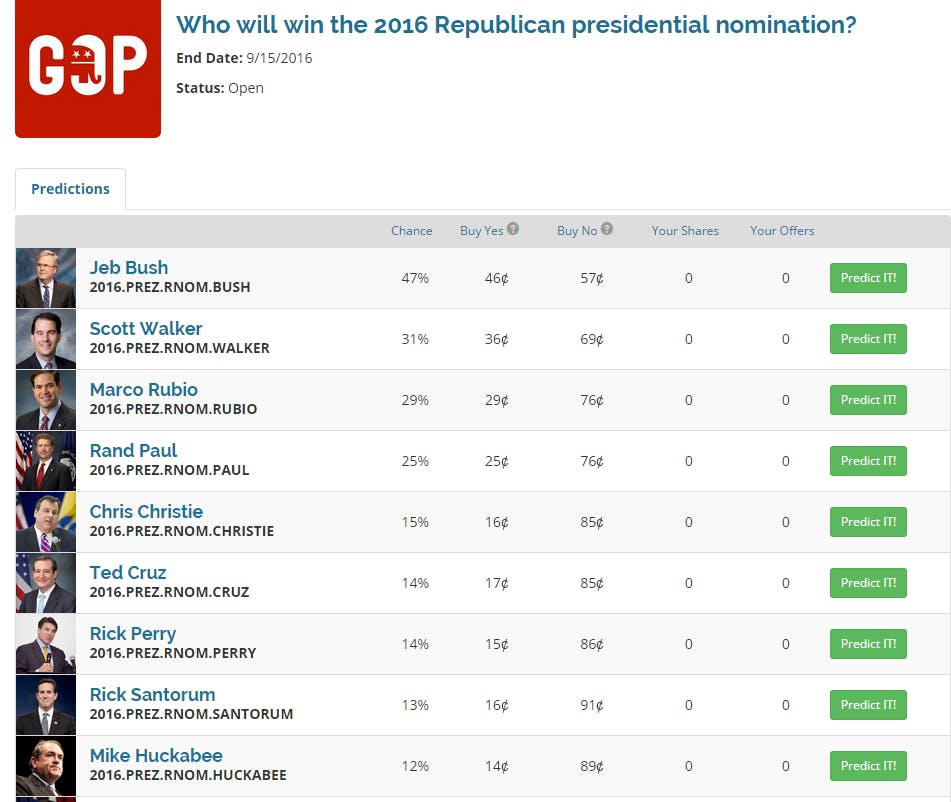 Prediction markets hit the American mainstream in 2001, when Intrade.com launched. But profound legal troubles have kept tens out thousands of potential American bettors out of the prediction game for the last several years.

Now, PredictIt is about to become the most popular American prediction market ever, surpassing Intrade in the number of players making deposits just half a year after it was granted legal standing in the U.S.

Prediction markets are very good at what they do. Research shows they beat pollsters and pundits regularly. In 2008, for example, Intrade came within a single electoral vote of predicting the election. In 2012, the market nailed 49 out of 50 states.

PredictIt is seeing “well over 90 percent accuracy,” according to the site’s internal numbers. 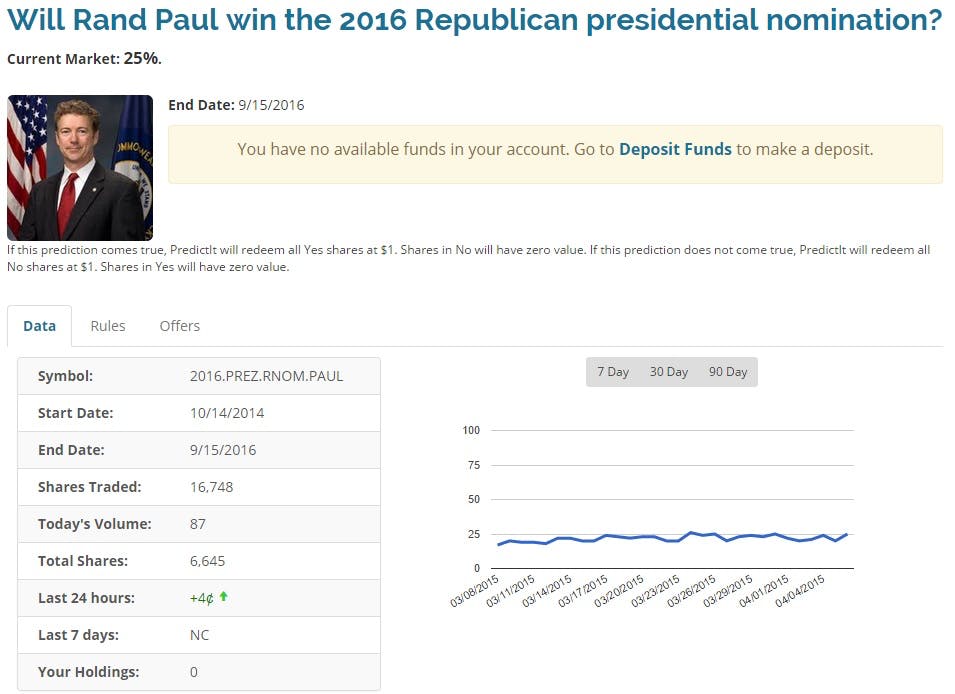 The site’s current predictions are that U.S. Congress’s approval rating will not rise above 20 percent this month, the U.S. Supreme Court will legalize gay marriage nationwide this spring, and that Ruth Bader Ginsburg will be the next justice to leave the Supreme Court, among many others.

PredictIt also gives Hillary Clinton a 75 percent chance to win the Democratic nomination, and a current lead of 49 to 33 against Bush for the White House in 2016. (Paul only muscles a 14 percent chance, while liberal star Elizabeth Warren has just 12 percent likelihood at the Oval Office.) 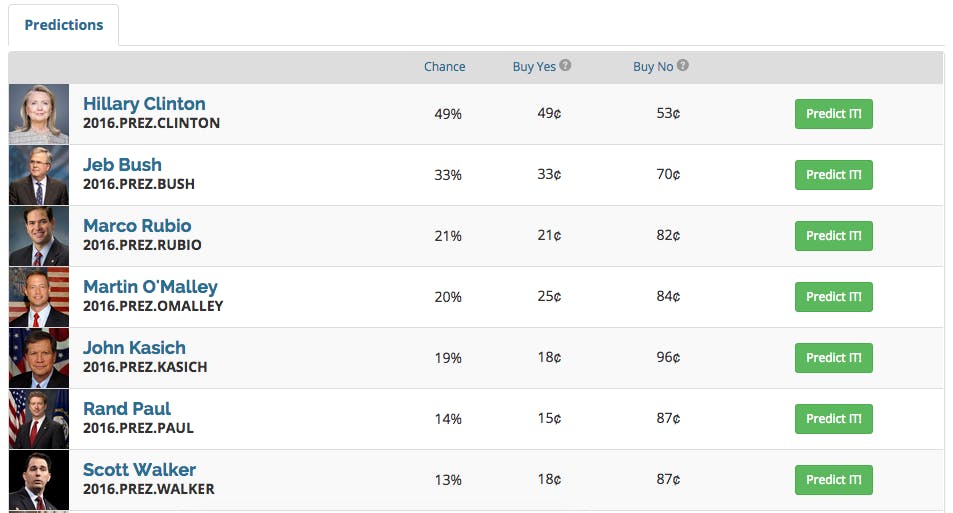 Perhaps surprisingly, research shows that both real and play money markets provide predictions that are better than polls. The edge, however, does go to real-money bets in correctly predicting the future.

“We’re witnessing and will continue to witness a high performance for accuracy,” said John Phillips, CEO of political consultancy firm Aristotle, which is working with PredictIt. “It’s quite reliable and frequently better than traditional political intelligence and pollsters, and often with greater confidence and earlier inklings.”

PredictIt allows up to 5,000 people to place bets of up to $850 each on a particular question—for instance, who will be the 2016 Republican nominee?

Intrade had no such limits, but Phillips contends the limits may actually increase PredictIt’s accuracy because, unlike in unlimited markets, no enormous bets from “whales” can skew the numbers. Instead, everyone gets a relatively equal playing field at $800.

The limits also mean, however, that while PredictIt has more players than Intrade did, it does not have more money. Still, the plainly legal status of PredictIt means that retrieving your money is much easier for Americans to do.

PredictIt, with the help of Aristotle, has bigger plans, too.

The market will be sponsoring intercollegiate contests between major American universities, Phillips said. The project is “still in its infancy,” he said, but a dozen large universities have already agreed to participate.

The academic goals of PredictIt are what allow it to legally function.

“[Victoria University’s] main objective for its event contracts market is to determine whether it can aggregate information and predict outcomes of certain events more accurately than through alternative means, such as public opinion polling,” according to a CFTC release last year. “The university plans to use the results from its market as teaching tools in its courses on statistical analysis, market theory, and trader psychology, and as supporting data for research papers and analyses.”

Keep an eye on the close markets in particular. Right now, for example, PredictIt players are nearly evenly split on whether or not the GOP will be able to keep control of the Senate in the next elections.

In reports on these subjects, PredictIt has already been referenced across major media.  As more players flock to it and U.S. presidential elections approach, expect to see the name pop up again and again.