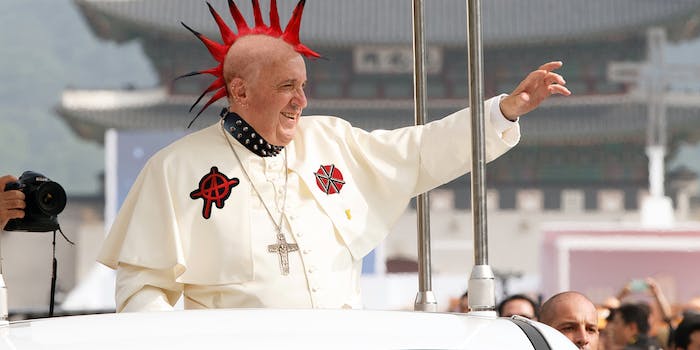 Successor of the Prince of #Shade.

On his historic trip to the United States, Pope Francis stopped at Congress to give a speech. Unlike many previous Catholic Church leaders, Pope Francis hasn’t been afraid to wade directly into political controversies. For example, speaking at the White House earlier this week, he urged leaders to take strong action on climate change.

When he announced a congressional appearance, everyone was expecting a deeply political speech. One Republican lawmaker was so concerned with the speech’s expected political content that he made a big stink about boycotting the event altogether.

While Pope Francis’ actual speech was largely political in nature, his criticisms of U.S. policy and society were couched just under the surface. The Pope attacked target after political target with the subtlety of someone who has spent much of his life navigating the longest-running bureaucracy on the planet.

What follows is a breakdown of Pope Francis taking the concept of the subtweet—used on Twitter to refer to the practice of talking smack about someone without mentioning the person directly—onto the floor of Congress:

“You are called to defend and preserve the dignity of your fellow citizens in the tireless and demanding pursuit of the common good, for this is the chief aim of all politics.”

Pope Francis seems to argue that dignity is something citizens should demand from their governments.

“I cannot hide my concern for the family, which is threatened, perhaps as never before, from within and without. Fundamental relationships are being called into question, as is the very basis of marriage and the family. I can only reiterate the importance and, above all, the richness and the beauty of family life.”

The four Supreme Court Justices who found bans on same-sex marriage unconstitutional: While Pope Francis has struck a less aggressive tone expressing the Catholic Church’s opposition to same-sex marriage and same-sex relationships in general, he still views expanding the definition of marriage as a threat to the entire institution.

“A political society endures when it seeks, as a vocation, to satisfy common needs by stimulating the growth of all its members, especially those in situations of greater vulnerability or risk.”

Trickle down economics: For most American workers, wages have barely kept up with inflation for decades. The overwhelming majority of the new wealth being created in the United States is going to the people at the very top of the income pyramid.

“Our world is increasingly a place of violent conflict, hatred, and brutal atrocities, committed even in the name of God and of religion. We know that no religion is immune from forms of individual delusion or ideological extremism.”

ISIS: A United Nations report released last year laid out the brutality of the Islamic State toward the people living in the area it controls in Iraq and Syria. The report laid out a stunning campaign of murders that have left tens of thousands dead in the name of the group’s regressive interpretation of Islam.

“A delicate balance is required to combat violence perpetrated in the name of a religion, an ideology or an economic system, while also safeguarding religious freedom, intellectual freedom and individual freedoms. But there is another temptation which we must especially guard against: the simplistic reductionism which sees only good or evil; or, if you will, the righteous and sinners. The contemporary world, with its open wounds which affect so many of our brothers and sisters, demands that we confront every form of polarization which would divide it into these two camps. We know that in the attempt to be freed of the enemy without, we can be tempted to feed the enemy within.”

GOP presidential candidate Ben Carson: Retired neurosurgeon and currently surging Republican presidential candidate Ben Carson recently stirred controversy for saying that the Unites States shouldn’t elect a Muslim president. Carson has said that donations have been rolling into his campaign in the days since he made his comments, which isn’t all that surprising considering nearly one-third of Iowa Republicans told pollsters that Islam should be outlawed. However, that level of outright religious antipathy is decidedly not chill with the Pope.

“If politics must truly be at the service of the human person, it follows that it cannot be a slave to the economy and finance. Politics is, instead, an expression of our compelling need to live as one, in order to build as one the greatest common good: that of a community which sacrifices particular interests in order to share, in justice and peace, its goods, its interests, its social life.”

The campaign-finance system: A 2014 study out of Princeton University found that, for all intents and purposes, the United States is effectively no longer a democracy. Looking at thousands of policy initiatives over the years, researchers found that the views of ordinary citizens toward a given issue played no part in lawmakers addressing the topic with legislation. The only opinion that counted was that of the economic elite, the study foud. As super PAC donations continue to grow at a record pace, the American political system seems entirely beholden to the power of big money.

“In recent centuries, millions of people came to this land to pursue their dream of building a future in freedom. We, the people of this continent, are not fearful of foreigners, because most of us were once foreigners. I say this to you as the son of immigrants, knowing that so many of you are also descended from immigrants.”

Donald Trump: Currently leading in the polls for the 2016 GOP nomination, Donald Trump has staked much of his campaign on anti-immigrant rhetoric. He’s stoked fears about undocumented immigrants being rapists, legal immigrants stealing jobs from American citizens, and even cast aspersions at Jeb Bush’s wife, who was born in Mexico.

“Tragically, the rights of those who were here long before us were not always respected. For those peoples and their nations, from the heart of American democracy, I wish to reaffirm my highest esteem and appreciation.”

European colonizers: This one is tricky. Pope Francis called out the disastrous effects European colonization of the Americas had on its native inhabitants. However, while on his current trip to the United States, Pope Francis canonized Spanish priest Junipero Serra, who established a chain of missions throughout California. Native-American activists are protesting the ceremony because, they argue, this system contributed directly to the oppression and enslavement of California’s indigenous population.

“The Golden Rule also reminds us of our responsibility to protect and defend human life at every stage of its development.”

“In these times when social concerns are so important, I cannot fail to mention the Servant of God Dorothy Day, who founded the Catholic Worker Movement. Her social activism, her passion for justice and for the cause of the oppressed, were inspired by the Gospel, her faith, and the example of the saints.”

Conservatives: Dorothy Day is the founder of the Catholic Worker, an activist newspaper that fought for worker solidarity, increased services for the poor, women’s suffrage, and anti-Cold War pacifism. Day is considered one of the central figures in America’s progressive Catholicism.

“It goes without saying that part of this great effort is the creation and distribution of wealth. The right use of natural resources, the proper application of technology and the harnessing of the spirit of enterprise are essential elements of an economy which seeks to be modern, inclusive, and sustainable.”

Capitalism: Wealth is largely created and distributed through the market. However, Pope Francis is implying here that, left to its own devices, markets tend toward inequality, violation of privacy rights, and environmental destruction.

“We have the freedom needed to limit and direct technology”; “to devise intelligent ways of … developing and limiting our power”; and to put technology “at the service of another type of progress, one which is healthier, more human, more social, more integral.” In this regard, I am confident that America’s outstanding academic and research institutions can make a vital contribution in the years ahead.”

“Being at the service of dialogue and peace also means being truly determined to minimize and, in the long term, to end the many armed conflicts throughout our world. Here we have to ask ourselves: Why are deadly weapons being sold to those who plan to inflict untold suffering on individuals and society? Sadly, the answer, as we all know, is simply for money: money that is drenched in blood, often innocent blood. In the face of this shameful and culpable silence, it is our duty to confront the problem and to stop the arms trade.”

The military-industrial complex: The United States is the world’s largest arms exporter. Between 2010 and 2014, international weapons exports increased by 23 percent and accounted for nearly one-third of the total global volume of military hardware sales. In the 2011 fiscal year alone, the State Department approved arms sales to 173 nations, including ones with troublesome human rights records, like Saudi Arabia, Honduras, and Bahrain