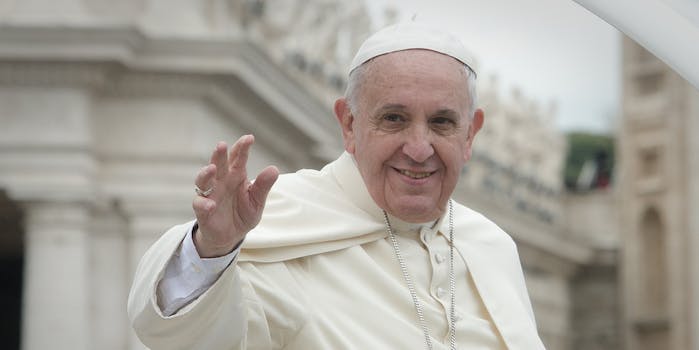 We're all going to hell.

In an interview published on Wednesday, Pope Francis likened media outlets that spread fake news to people who are turned on by feces.

“I think the media have to be very clear, very transparent, and not fall into—no offense intended—the sickness of coprophilia, that is, always wanting to cover scandals, covering nasty things, even if they are true,” Francis told Belgian Catholic news weekly Tertio, reports Reuters. “And since people have a tendency towards the sickness of coprophagia, a lot of damage can be done.”

Coprophilia—Google that at your own risk—is the fetish of being aroused by interacting with feces, in case you were wondering.

The pope further lamented media that focuses on political scandal and resorts to slander to make political opponents look bad. “The means of communication have their own temptations, they can be tempted by slander, and therefore used to slander people, to smear them, this above all in the world of politics,” Francis said, adding, “No one has a right to do this. It is a sin and it is hurtful.”

Fake news has become a hot topic since the election of President-elect Donald Trump, whom some believe benefited from the spread of bogus news stories shared primarily through Facebook.

A BuzzFeed News analysis of stories shared on Facebook during the 2016 election found that fake news stories received far higher engagement than “real news” stories (though most of the ones on the list were opinion articles or analysis, not straight news). If that is even close to true, well, then we’re all probably going to hell. Sorry for the crappy news.