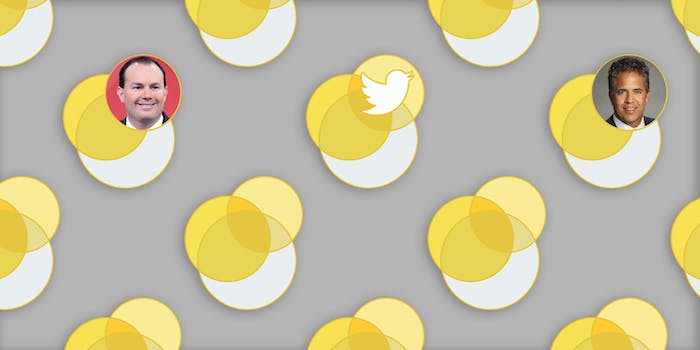 Gone, but not forgotten.

On May 30, 2012, the Sunlight Foundation launched Politwoops, an ambitious program to archive American politicians’ deleted tweets. A few days later, Twitter contacted the Sunlight Foundation with a warning: “your service violates our API Terms of Service on a fundamental level.” But Sunlight, a nonpartisan, nonprofit transparency organization, explained the project sought to publicly keep those in power and seeking power accountable. Twitter relented, so with official blessing, Politwoops grew over the next three years to become what the Washington Post called an “invaluable accountability resource.” But all that abruptly changed earlier this month, when Twitter reversed course and shut down Politwoops.

As the project lead, I’ve had the privilege to review every deletion on the site. I’ve woken up every morning to whatever content the accounts of the most powerful people in the country tried to remove. I wrote every week about notable deletions from the site, and carefully screened out deleted tweets with minor errors that were quickly corrected. While the Politwoops database let visitors sift through 15,529 deletions, that’s less than a third of the 48,192 deletions the system caught. There were a lot of corrected typos! Since Sunlight first spun up the system, Politwoops observed 1,622,095 tweets from 1,859 Twitter accounts.

Instead of speculating on Twitter’s perplexing statement to Gawker about why it changed its mind, or analyzing its policy whims, I’d prefer to review why a tool like Politwoops has been so important to modern politics. Politwoops was, and is, a public archive. Anyone could do the research required to uncover the messaging changes, understand how politicians are using Twitter and do follow up questions to uncover the full story.

Some tweets are immediately shocking, and followers frequently take screenshots when they expect a user will remove it. Sure, Politwoops captured those types of deletions, like when the governor of Delaware removed a surprising link to woman wearing leather straps, but the site’s real value was when politicians try to hide the online record after people have moved on. Reasons for deleted tweets ran the gamut: perhaps the political rhetoric wasn’t to blame; perhaps their vote changed; perhaps they’d like a clean slate. Perhaps something else entirely.

But here, in memoriam, are some of my favorite moments with Politwoops.

Last summer, Sgt. Bowe Bergdahl was released from years of Taliban captivity. It soon became a contentious political issue, as details of the release and prisoner exchange became public, leading half a dozen politicians to try to hide their initial welcoming reactions to Bergdahl’s return. Nobody noticed tweets from days prior were missing until we published them. 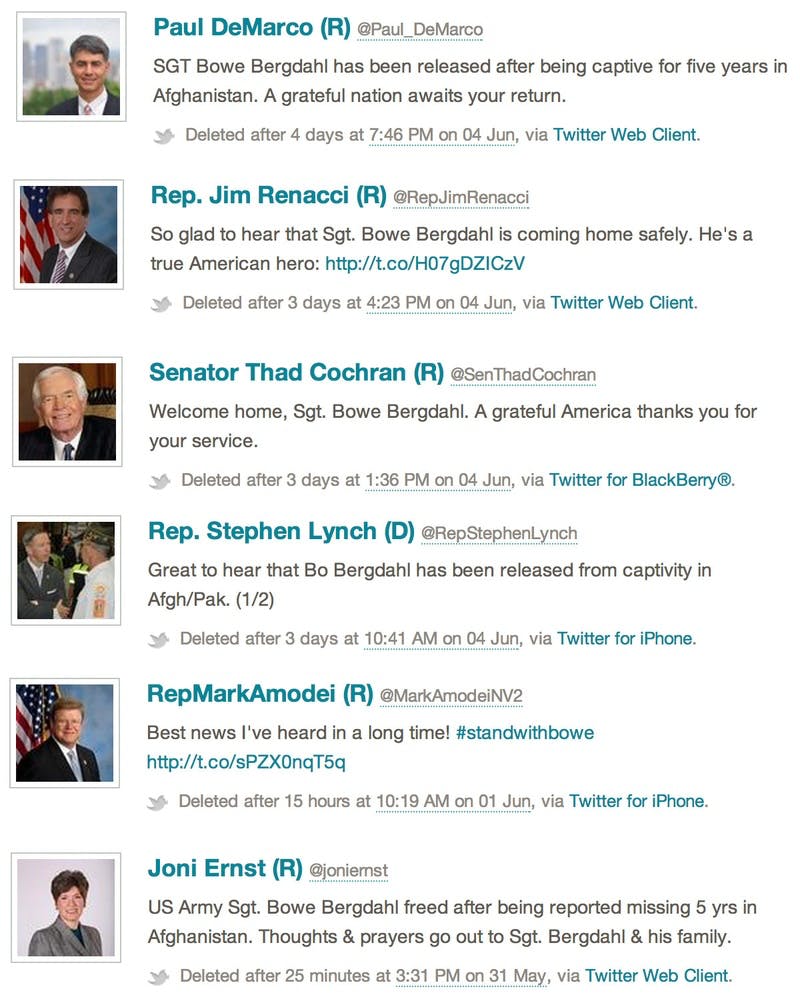 While on a trip to Houston with Sen. Mike Lee (R-Utah), the official account for Sen. Ted Cruz (R-Texas) deleted a tweet showing the two posing with a tiger skin rug. The message garnered praise from Roll Call, which wrote, “Sen. Ted Cruz did a little troll hunting April 23, baiting the entirety of the Internet-enabled world with a perplexing pic of an urban safari that incited carnage across the social mediasphere.” Cruz’s spokesperson told the Washington Post that “the office is not defensive of the picture.” But a week later, it was deleted—though preserved, of course, by the Politwoops archive. 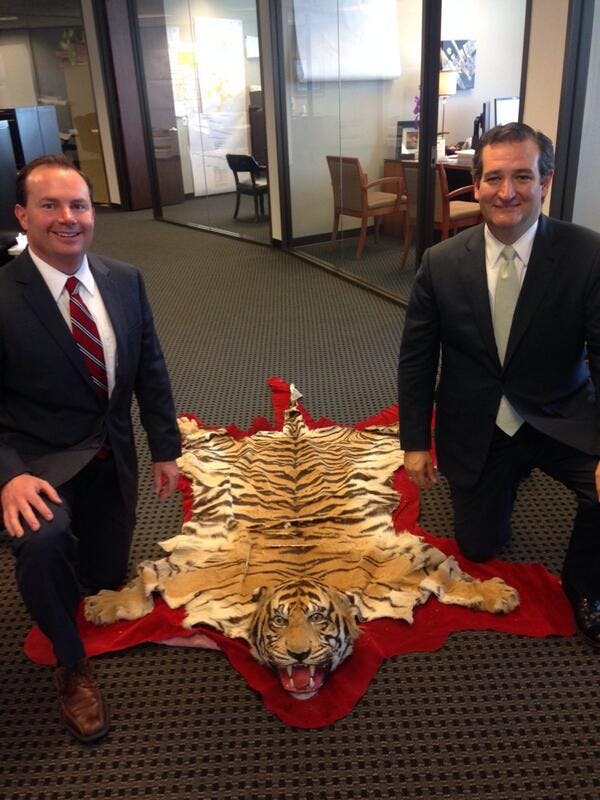 When the 114th Congress began in January of this year, many newcomers had to quickly learn the rules of their chamber. One House freshman, Rep. Mike Bishop (R-Mich.), broke them the first time he presided over the floor. He eagerly took to Twitter and shared photos from behind the Speaker’s rostrum saying, “Honored to preside over House activity today in the Temple of Democracy.” He shared another with a panoramic photo. These tweets were deleted after a reporter pointed out such a depiction was against the rules. Again, Politwoops saved the slip preserving the sleep.

These are just a few examples of how Politwoops provided a public service. This value was affirmed once the shutdown of Politwoops became public and support came from all sides.

I'm very sorry to see @twitter kill Politwoops. What politicians delete is as important for the public to know as what they publish.

All jokes aside, I believe that public statements made by public officials should be preserved. cc: @SunFoundation @gov

The Washington Post’s Philip Bump wrote in a column entitled “Twitter’s terrible decision to block Politwoops” that “We need more services like Politwoops (as I’ve argued before), not fewer.”

It’s worth remembering that until 2008, there were actually rules prohibiting members of Congress from using unofficial websites to post “official communications.” In a report in 2007, the Open House Project, a collaborative reform initiative hosted by the Sunlight Foundation, proposed a rules update to allow Congress to use social media. After many discussions advocating for the change on Capitol Hill, and a campaign called “Let Our Congress Tweet” (written about on Twitter’s official blog), Congress finally got the message. It overhauled its own guidelines and allowed members of Congress to join any social media service they wanted.

While the Sunlight Foundation is out of the deleted tweets game, Politwoops proved that citizens want to hold their politicians accountable for the things they say in public—that need does not end with the end of Politwoops. We’re confident that something else will come along that will empower the public the way Politwoops did. Until then, we’ll continue our work at the Sunlight Foundation to track money in politics and influence in Washington, and to advocate for a more transparent, open government.