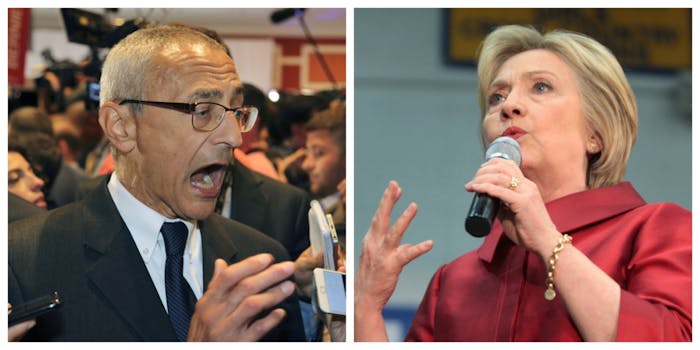 Hillary Clinton and her former campaign chairman, John Podesta, both reflected this week on the hacking scandal that may have cost their camp the White House, pointing the finger at Moscow and leveling scores with the FBI.

In New York’s Plaza Hotel on Thursday evening, Clinton addressed donors in a short speech at a party event during which she briefly discussed the recently reported CIA assessment of the election hacks. She said that the hacks had cost her the election and were an “attack on our national security and an attack on our democracy.”

Attendees reported that the Democratic presidential nominee commented that Russian President Vladimir Putin had maintained a personal grudge against her since she had criticized Russia’s parliamentary election process in 2011. In a speech delivered as secretary of state, Clinton described the Russian election as unfair, a characterization to which Putin objected and called a “signal” to incite unrest.

Meanwhile, Podesta heavily criticized the FBI on Thursday, accusing the agency of bias and disparity in it’s approaches to investigating Clinton’s email servers and looking into Russian hacking allegations.

In a particularly scathing and direct op-ed published by the Washington Post, the Democratic power player held no punches: “Comparing the FBI’s massive response to the overblown email scandal with the seemingly lackadaisical response to the very real Russian plot to subvert a national election shows that something is deeply broken at the FBI.”

Clinton’s private email server controversy, Podesta writes, required “thousands of hours of effort from dozens of agents” yet, he asks, “Are thousands of FBI person-hours being devoted to uncovering Trump’s tangled web of debts and business deals with foreign entities in Russia and elsewhere?”

Podesta argued that if FBI Director James Comey cited “intense public interest” as a legitimate reason for the investigation into Clinton’s emails, then the FBI’s “lackadaisical” approach to alleged Russian meddling was not just “baffling” and “infuriating” but revealed a “deeply broken” agency.

The former campaign chairman also leveled criticism at House Republicans, whom he accused of the same hypocritic double-standard in their “insatiable appetite for investigating Clinton” while remaining “resistant [on] probing deeply into Russia’s efforts to swing the election to Trump.”