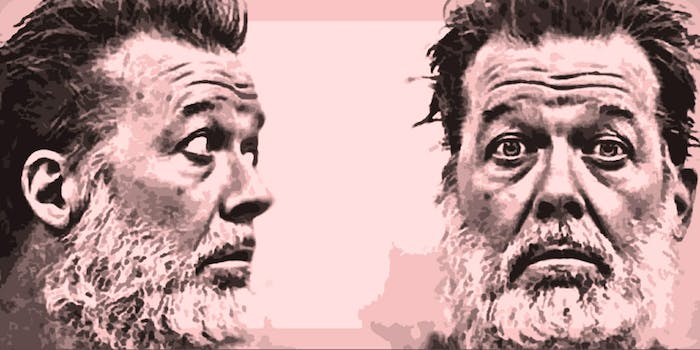 The suspected shooter appeared in court via video link on Monday.

Suspected shooter Robert Dear will stand trial for the murder of a police officer and two civilians at a Planned Parenthood clinic on Friday in Colorado Springs, Colorado. If found guilty, he could face the death penalty.

Dear appeared for court on Monday via video link from the El Paso County jail where he’s being held without bond. The families of the victims of Friday’s deadly shooting were present in the courtroom where a judge informed Dear of his charges on a closed-circuit TV set. With his hands shackled, Dear stood alongside his public defender wearing a white protective vest.

Police say the 57-year-old, who made rambling comments about Planned Parenthood following his arrest, was arrested after a five-hour siege at one of the nonprofit’s clinics. Dressed in a trenchcoat, he allegedly shot several people outside the women’s health clinic with a rifle before barricading himself inside. Three people, including a local police officer, were killed. Nine others suffered non-lethal gunshot wounds.

Following his arrest, law-enforcement sources say Dear told investigators “no more baby parts” during an interview, according to several U.S. media outlets. However, police officials have repeatedly told reporters that Dear’s motive has not yet been established.

According to ABC News, the U.S. Justice Department is preparing a domestic terrorism case against Dear that will only move forward if the state capital case gets sidetracked. The U.S. Secret Service also dispatched agents on Monday to evaluate statements Dear made about President Obama during or after the incident.

Planned Parenthood has been been under heightened security measures, it said, due to increasing threats stemming from the release of several videos secretly filmed by an anti-abortion group.

The group, calling itself the Center for Medical Progress (CMP), claims its footage is evidence that Planned Parenthood profits by “selling” aborted fetuses. The videos have been widely debunked in the press, however, and forensics experts say the footage was “blatantly manipulated” prior to release.

According to Planned Parenthood, it donates fetal tissue in accordance with U.S. law for medical research at less than one percent of its clinics and only in two states. It no longer accepts financial reimbursement from research facilities for storing and transporting tissue samples, Cecile Richards, the organization’s president, announced this fall.

Conservative lawmakers launched no less than a dozen federal and state investigations after CMP’s videos were uploaded to YouTube. Republican Rep. Tim Murphy, chairman of the House Energy and Commerce subcommittee—where one of three congressional investigations spurred from the videos is ongoing—told a reporter in July that he’d seen the videos weeks before any had been published.

Following a GOP debate in September, 2016 presidential candidate Carly Fiorina became a high-profile backer of CMP’s claims. One of its videos, she said, depicted a fully formed fetus with its heart beating, “while someone says we have to keep it alive to harvest its brain.”

Footage of an apparent fetus was inserted into CMP’s videos, but it contained no sound. The group’s leader, David Daleiden, said it was added to illustrate a story being told about Planned Parenthood. Daleiden would not disclose the origin of the video, but it may have been filmed overseas, according to a 2010 report on the origin of abortion videos.

On Sunday, Fiorina described linking violence to the “pro-life” movement as “typical left-wing tactics.” She referred to the Colorado Springs shooter as a “protester,” saying they should “always be peaceful, whether it’s Black Lives Matter or pro-life protesters.”

At least eleven people have died in attacks on women’s health clinics in the past 22 years—mostly physicians and police officers. In 2015, Planned Parenthood clinics in New Hampshire, Washington, and California were flooded, vandalized, and set on fire.

So far, none of the Republican-led investigations have unearthed any evidence that Planned Parenthood financially profited by donating fetal tissue.