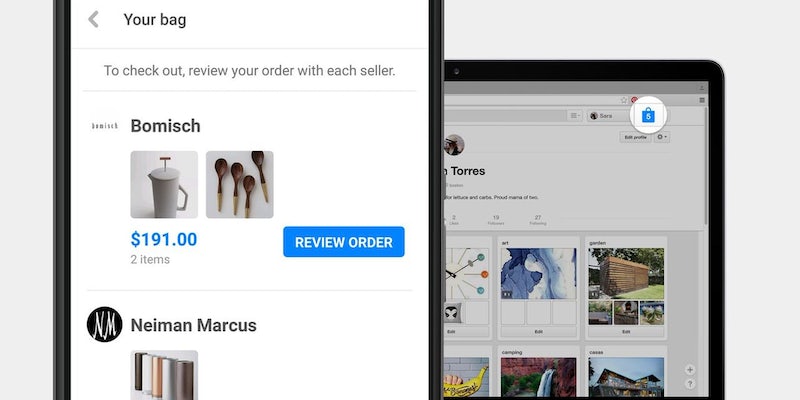 Soon you'll be able to search for stuff to buy from the real world.

Pinterest considers itself a “place for ideas,” and now it’s making it easier to turn those ideas into things that wind up on your doorstep. Soon you’ll be able to take a picture of something you see in real life, search for, and purchase it directly on Pinterest.

When the social bookmarking company unveiled buyable pins last year, it made it easier to order the things you love with a tap of a button. On Tuesday, the company rolled out buyable pins across all platforms—previously, they were only available on mobile.

In addition to the shopping cart that follows you across your phone and laptop, Pinterest announced updates to its buying features, taking care not to conflate “shopping,” with “buying.” Because the endless content of things to buy literally never ends.

“On Pinterest, shopping doesn’t end with buying. After you find those shoes, Pinterest gives you ideas how to dress them up and down and other things to wear them with,” said Larkin Brown, user researcher and in-house stylist at Pinterest. “Shopping today is this always-on cycle. You get ideas, you act on them, and you look for more ideas. It just keeps going.”

To Pinterest, shopping is a never-ending loop of finding stuff, buying it, and looking for more stuff to buy. To that end, you’ll now be able to browse similar items from the same merchant on Pinterest. Let’s say you found new running shoes from Nike and want to see them available in other colors or styles. Pinterest will show you all the Nike items that might match your selection in a carousel below the item, and you can tap on Nike’s merchant profile to look at more stuff.

If the millions of things to buy on Pinterest don’t provide you with the exact thing you want, its improved visual search might help. Pinterest made it possible to search for photos of items at the end of last year, and now it’s improving that function: Simply tap on objects in pins you want to find, and Pinterest will use image recognition tech to display similar items.

But shopping doesn’t just happen online. Soon, you’ll be able take a photo from the real world and search for the item on Pinterest, and buy it directly from the site.

Let’s say you’re on the subway and see a t-shirt you want. Instead of going up and asking a human person where they bought the t-shirt, you can take a photo on the sly and ask the Pinterest app instead.

There are a number of apps that can search visually from the real world, but Pinterest takes it a step further and provides an actionable step once the tech recognizes what it is you’re looking for.

See something, buy something. You don’t even have to be shopping to shop.

The new visual search feature will be rolling out over the coming months. To upload the photo of the stuff you want, tap the camera in the search bar and select the item from the photo. Pinterest’s image recognition will then show you all the stuff that looks like it. And in two taps, it can be yours.

Pinterest is fueling shopping addictions everywhere, and doing its part to eliminate the paradox of choice, the idea that there is so much stuff to choose from, making a choice is impossible. By streamlining your tastes into interactive carousels and letting you visually search for things you want IRL, the number of things you could pick from is theoretically smaller. But since the shopping experience is an endless loop of looking and buying and wearing and sharing, you’ll never actually run out of choices to make.