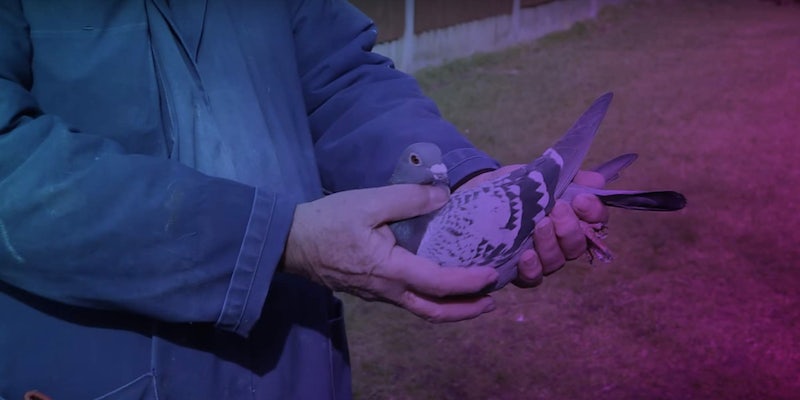 Pigeons get a bad rap, but in London, they’re doing more than begging for breadcrumbs and leaving their droppings on statues: The birds are helping alert citizens of air quality and pollution.

The Pigeon Air Patrol is a team of 10 pigeons that, for three days, are acting as canaries in the coal mine as they monitor the quality of air over England’s capital city.

And we're off! The first #PigeonAir patrol flies from Brick Lane, monitoring air pollution as we go! pic.twitter.com/W8KnyrxnCe

Equipped with a special, lightweight backpack that contains a variety of sensors—made by pollution tracking company Plume Labs—the birds are able to measure levels of nitrogen dioxide and ozone. Romain Lacombe, the co-founder and CEO of Plume Labs, told the Daily Dot the packs are “3D-printed casings specifically designed to fit on racing pigeon harnesses.”

Not only do the birds get readings of the air quality throughout the city, but they also report their findings directly via Twitter. If Londoners are in need of a reading before leaving their house, they can request that one of the brave pigeons travel to their destination first and provide the details of the area’s air quality.

Why pigeons? Lacombe explained that mobile sensors are able to “capture the breadth of variation of pollutant levels from street to street” in a way that stationary sensors can’t. While it’s hard to fly drones over the city, pigeons “have been used for centuries to carry important messages,” so it’s only fitting they would carry the necessary information about air quality as well.

Three pigeons handle the on-demand aspect of the project: Coco, Julius, and Norbert. Provided, like the rest of the birds, by pigeon racing expert Brian Woodhouse, the figureheads for the Pigeon Air Patrol each have their own, distinct personality and background highlighted.

Introducing the #PigeonAir patrol team: Norbert, Coco and Julius. At your service! pic.twitter.com/N1vg5tZZak

While the first-of-its-kind project to utilize birds as air quality monitors is novel, the pigeons also serve an important role in raising awareness and advancing the conversation about pollution in London.

According to a 2014 report, London hosts the highest levels of nitrogen dioxide in Europe. The concentrations of the harmful pollutant are greater in the city than in Beijing, which has been dubbed almost “uninhabitable for human beings” in a report by researchers in Shanghai.

The Pigeon Air Patrol has a vested interest of its own in illuminating the air quality of its home city; birds feel the effects of air pollution just as humans do. Studies have found that birds can suffer from irreversible lung damage when exposed to high levels of nitrogen oxide. Long-term exposure to pollutants can lead to inflammation, ruptured blood vessels, and even lung failure.

Birds are at an even higher risk than humans to some degree; they are exposed to more airborne particles because they spend more time in open-air environments and have a higher breathing rate than humans.

Ultimately, the goal of the Pigeon Air Patrol is to get people just as involved in the monitoring process as the birds. While pigeons lead the test flight, Lacombe said that his company is working with Imperial College to recruit 100 Londoners to participate in a beta test with a personal pollution tracker.

The willing parties will wear a lightweight sensor similar to the one strapped to the pigeons to track air quality as they go about their day in the city. “This experiment will help scientists research how access to personal, immediate, relevant information on exposure to pollution helps individual decision-making as well as better policy choices,” Lacombe said.

With the information acquired by the army of pollutant trackers, Plume Labs hopes it will be able to better equip the populous with information about the air around them. The data will be mapped out so pockets of pollution can be visualized clearly, with live updates coming as wearers move about the city.

The data will also support Plume Labs’ Air Report app for iOS and Android, a product designed to educate and inform people about air quality and provide pollution forecasts so people can minimize exposure.

The next time you see pigeons, thank them instead of shooing them away. And just think, if you stopped polluting their air, maybe they’d stop pooping on your car.