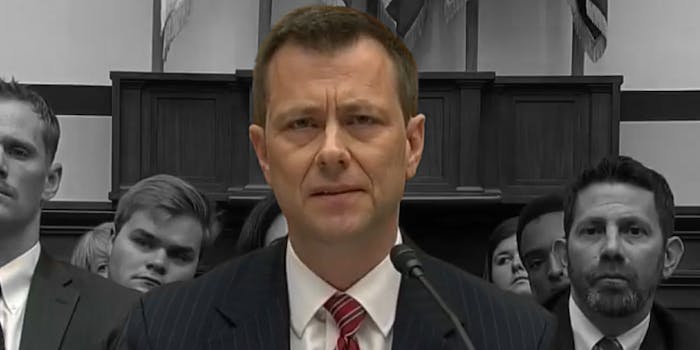 If you were watching the disgraced FBI Agent Peter Strzok dodge the truth in testimony to Congress last week, you'll understand our difficulty in getting Strzok’s official communications out of the FBI/DOJ. We don’t give up though, and we're succeeding. https://t.co/74PBQJKNxk

After the discovery of text messages critical of Trump that were sent to and from Strzok, he became the focal point of the ever-evolving conspiracy theory that U.S. intelligence agencies have been running a non-stop campaign to destroy the president. Or, as Presiden Donald Trump friend and Fox News figure Jeannie Pirro put it, “the personification of the deep state itself.”

Strzok has maintained that his personal biases played no role in his work with the FBI, either investigating Hillary Clinton’s email server, or his subsequent work on the Robert Mueller investigation.

But right-wing conspiracy theorists have begged to differ. He’s been called a liar, creepy, evil, and “a disgrace to our country” by no less than the president himself.

Thanks to a new conspiracy theory, we can add another term to that list: “sheep-dipped.”

THIS IS BIG PEOPLE! SHARE IT! https://t.co/dzjGuGXfVs via @intellihubnews #deepstate #FBI #CIA

On June 28, conservative blog “Brass Balls” published a story under the byline of one “Harry the Greek” titled “Peter Strzok Worked for the FBI and the CIA at the Same Time.”

The story accuses Strzok of holding a “joint position” with both agencies that was “created by Congress in 1996.” Theoretically, this would violate both of their missions—as the FBI deals with domestic threats, and the CIA handles international ones.

The “evidence” that “Harry the Greek” uses to back up his explosive claim is an FBI  memo from 2016, obtained via a FOIA request by BuzzFeed reporter Jason Leopold.

The letter is one of two that were, ironically, related to a hugely important saga that was just beginning to unfold at the FBI—the investigation into Hillary Clinton’s private email server.

In the memo from Strzok, related to the possible compromise of classified information by Secretary Clinton, Strzok signs off as “Section Chief, Counterespionage Section.”

According to “Harry the Greek,” that title alone is proof Strzok was working for both agencies because “the FBI never had such a unit.”

“Strzok was ‘a senior FBI official’ by being the CIA’s Chief of Counterespionage,” Harry the Greek continues, “The official job description of Strzok’s joint position included ‘full-time coordination with the FBI … including weekly meetings with senior FBI officials in the FBI’s National Security Division.’”

Here he cites a 1996 press release from the CIA following the arrest of staffer Harold Nicholson for passing classified documents to Russian intelligence. That memo lauds reforms both agencies undertook in the wake of previous espionage cases, pointing out that Nicholson was caught thanks to “an unprecedented level of cooperation between the CIA and the FBI.”

Buried in the memo is an admittedly confusing passage that outlines one of the ways the FBI and CIA increased their inter-agency communications, “The Chief of CIA’s Counterespionage Group is a senior FBI official who has full access to CIA’s most sensitive counterintelligence data and is thus in a position to fully coordinate the joint efforts of both organizations.”

This is apparently the text that led “Harry the Greek” to conclude that Strozk was Section Chief of the Counterespionage Section, a CIA position that was staffed by a “senior FBI official.”

Strzok was supposedly CIA all this time, planted in the FBI.

Within just a few days, the claim that Strzok was somehow working for both agencies, and really for Obama the whole time, raced around the entire right-wing media sphere.

Another far right site, Intellihub, referred to Strzok as “sheep-dipped” (the intelligence practice of giving fake identities to undercover agents) and alleged that the job Strzok held “is not an FBI post, as Strzok’s position at the FBI is ‘Deputy Assistant Director Counterintelligence Division’ and ‘Section Chief’ which is a CIA post.”

Yet another popular right-wing news site, Big League Politics, went even further, claiming without evidence that Strzok “only held a ceremonial title in the Bureau, but was really operating under the leadership of the CIA, including Obama’s vindictive CIA director John Brennan.”

The claim also picked up steam on social media, where it was shared by regular Trump supporting accounts with tens of thousands of followers.

There are a number of problems with the theory put forth by “Harry the Greek,” however.

For one, the position of Chief of the CIA’s Counterespionage Group is an actual job, and it’s not held by an FBI agent, it’s held by a CIA agent.

The last holder was William R. Evanina, who took over the task of coordinating CIA and FBI efforts in 2013. Evanina was recently nominated by President Trump to run the National Counterintelligence and Security Center.

Also, both the FBI and CIA have counterintelligence/counterespionage sections. As evidenced by the Nicholson arrest, they work together quite often—hence the need for William Evanina’s job.

Beyond that, the FBI uses “Section Chief” as a title, and a simple Google search brings up a number of FBI personnel who have held the title. Some are Associate Deputy Director Paul Abbate, Public Corruption and Civil Rights Section Chief Adam Lee, Criminal Justice Information Services Division Section Chief Chris Nicholas, and many others.

It’s possible that various authors conflated the term with “station chief,” a CIA-only term used to denote the top Agency official in a country. It’s also possible they made it up.

Even the supposedly salacious memo from Strozk that supposedly includes his “ceremonial” FBI title lets Harry the Greek down, as the other memo is signed by Charles H. Kable, who was another Section Chief of the Counterespionage Section during the time of the FBI’s investigation into the Clinton server.

So the entirety of the evidence that Strozk was working for both agencies, seemingly on behalf of the nefarious deep state, is a misunderstanding about a memo, and a lie about FBI titles.

This is entirely typical of conspiracy theories, which take a grain of truth and twist it beyond all recognition. It’s happening with Strozk again, as many of the same sites pushing the “sheep-dipped” lie are also pushing a conspiracy theory that because Strozk’s father spent some time working in Iran before the Revolution in 1979, when the younger Strozk was a child, that somehow he’s connected to Muslim extremism or an Iranian sleeper agent.

That’s the wonderful thing about being a conspiracy theorist—you don’t need the whole truth, just enough it of it to make your theory plausible.