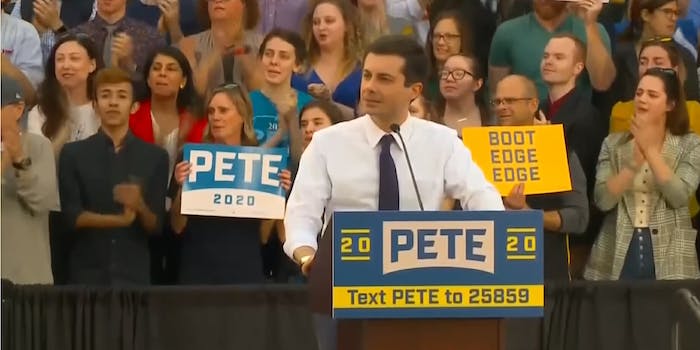 The protesters were yelling about 'Sodom and Gomorrah.'

Pete Buttigieg, the Indiana mayor and 2020 Democratic presidential hopeful, was interrupted by anti-LGBTQ protesters on Tuesday.

The protesters interrupted a speech by the 2020 hopeful in Iowa by shouting about “Sodom and Gomorrah,” two biblical cities supposedly destroyed by God. One protester began yelling after Buttigieg, who is gay, addressed his marriage.

After the audience applauded, one man could be heard shouting the anti-LGBTQ remarks. Buttigieg looked in his direction and said “hello again” before moving on with his speech. As the man persisted, the crowd began chanting the Democrats name.

“You know, the good news is, the condition of my soul is in the hands of God, but the Iowa Caucuses are up to you,” Buttigieg said after the man was escorted out of the crowd.

"You know, the good news is, the condition of my soul is in the hands of God but the Iowa Caucuses are up to you."

Later, another protester continued yelling similar remarks. The 2020 hopeful responded: “We got it. Promise you, we got it.”

“Remember the beauty of our democracy: everyone here gets the exact same voice and vote. Feels like the numbers are on our side.”

The city of Sodom was supposedly destroyed by God after angels were unable to find “righteous men” within it. The name of the city’s denizens, Sodomites, is a derogatory term for homosexuals.