Peres: This electronic nose could save you from food poisoning

Yes, the expiration date was a week ago, but the food smells fine. How much can you really trust your nose?

With chunky milk or curdled yogurt, it’s easy to tell when food is bad. But meat is trickier—which is why it’s often the culprit behind nasty cases of food poisoning.

Food poisoning can strike patrons at an upscale restaurant or people snacking on street meat. You swear the steak smelled fresh, but you’re retching in the bathroom for an entire afternoon. It’s often difficult to tell if your food is contaminated, which is why there are 76 million cases of foodborne illness in the U.S. each year, and 5,000 deaths.

That’s where Peres comes in. The electronic nose can test pork, beef, chicken, and fish to determine whether they’re safe to eat. Peres takes a sample of the air from around the animal protein and uses sensors to calculate the freshness and quality, testing for temperature, humidity, volatile organic compounds, and ammonia. (Volatile organic compounds are carbon-based chemicals found in living things, so they get released as food ages.)

Peres looks like a remote control, and people hover it over their food to test it. The results get sent to an app, so people just check their smartphone to find out whether the meat is spoiled or not. 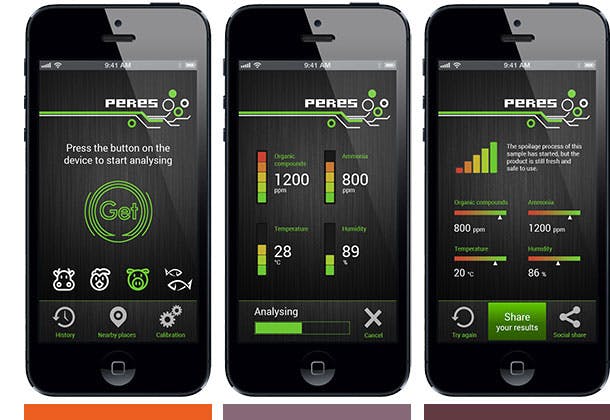 It’s the kind of device that seems like it should’ve been invented years ago, so it’s not surprising the start-up making it has already exceeded its Indiegogo funding goal.