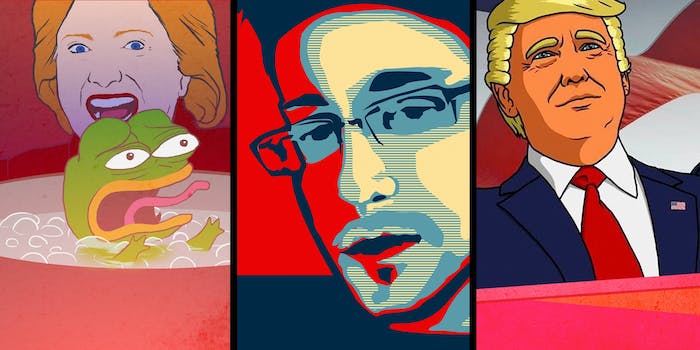 Important news you may have missed for Tuesday, Sept. 13.

The Clinton campaign knows about Pepe, and it feels bad, man. In a sentence I can’t actually believe I am about to type, former Secretary of State Hillary Clinton put out an explainer about how the Pepe meme has become an icon of the white supremacist alt-right.

Pepe is a cartoon frog. Sometimes people draw him as a Trump-supporting neo-Nazi. Other times, he’s simply a chill frog who enjoys getting high. Here is the most important part of Clinton’s explainer:

Cartoonist Matt Furie, who created Pepe in 2005, tells the Daily Dot’s Miles Klee that the racist, xenophobic Pepe isn’t the Pepe that will be recorded in the meme history books. “It’s just a phase, it’s not the first time Pepe has been reclaimed for evil, and no one will care about it come November,” Furie said. “I predict that his sly, lovable, and charming status will be intact as early as next week.”

That’s some pretty lucid commentary about the necessity of post-modern readings of collaborative online art forms for someone who also believes the Sandy Hook massacre was fabricated by the government.

During a congressional hearing about how the growing prevalence of encrypted communication tools is allowing terrorists to potentially avoid the U.S. government’s omnipresent dragnet of electronic surveillance, Undersecretary of Defense for Intelligence Marcell Lettre said that conversations between the Obama Administration and tech companies have largely gone dark.

Layer 8’s Patrick Howell O’Neill reports: “[Lettre] insisted that the White House was making progress in a different way: quieter and more friendly conversations with tech magnates and leaders. Crucially, these conversations have stayed out of the public eye … The Obama White House’s weapon of choice against the changing cyber landscape is now, in this case at least, forging a more intimate relationship between Silicon Valley, the Pentagon, and America’s intelligence community through ‘quiet conversion’ rather than public debate.”

Fox hosts say Dr. Oz told them HE will see Trump's medical records before Trump & will reveal them to Trump on air: pic.twitter.com/ucBXtxe1Zv

Edward Snowden smiles his most charmingly roguish grin and asks, “How can can you stay mad at this face?” The former NSA contractor who leaked a massive trove of classified documents to reporters before decamping to Russia, is ramping up a publicity campaign to convince the Obama administration to grant him a pardon.

How concerned should we be about Hillary Clinton’s pneumonia, really? Vocativ’s Allee Manning lays it out: “Rumor mill aside, the facts about pneumonia and Clinton’s symptoms and current state make it seem quite likely that 1) she has a common infection that she probably picked up off some germy human while shaking hands all day long, 2) her campaign probably isn’t really hiding some massive conspiracy, and 3) she most likely isn’t dying, at least no faster than any of us are, as we inch closer to death each day.”

A transgender person is suing Indiana Gov. Mike Pence over state rules that only allow American citizens to file for official name changes—even though legally changing genders requires no such citizenship requirement. The Daily Dot’s Mary Emily O’Hara reports the suit’s plaintiff, who was born in Mexico and is a legal U.S. resident, has undergone gender-affirming hormone therapy. But the plaintiff still has to go around with a driver’s license that “shows a photo of a man, a male gender marker, and a female sounding name.”

we live in a fascinating country pic.twitter.com/bAaDaxg9OJ

A 14-year old Irish girl is suing Facebook over not doing everything it could to prevent a revenge-porn image of her being posted to its platform. While Facebook did take down the image after the company was notified, the suit charges that Facebook currently employs a technology that could have prevented the image from being allowed on the site in the first place.

Billionaire LinkedIn founder Reid Hoffman would like to add Donald Trump’s tax returns to his professional network by offering to donate $5 million to veteran’s groups if Trump makes the documents public. It’s an interesting gambit that seems unlikely to work, because Trump’s charitable ventures tend to lean toward using his foundation’s money to buy a giant painting of himself.

Revenge for every coastal liberal who has ever made a joke about “flyover country.”

Netflix, which uses all the data, wants the FCC to stop broadband providers from putting data caps on customers. “A data cap or allotment of 300GB of data per month or higher is required just to meet the internet television needs of an average American,” the company wrote in a statement. “This does not account for the other things that consumers typically do with their broadband connections, such as web-browsing or downloading games or apps from the internet. An above average television watcher, a multi-occupant household, or a consumer wishing to watch in 4K requires a much higher cap or allotment. In this way, today’s ‘above-average’ internet consumer is tomorrow’s average internet consumer.”

Black Mirror creator Charlie Booker, who once wrote an episode of the dark sci-fi drama about a cartoon meme who becomes a tyrannical dictator, predicts Donald Trump will become president, a prospect he finds “fucking terrifying” —via Jen Yamato, Daily Beast

A Canadian Muslim illegally donated money to the Trump campaign because he lost a bet —via Michael Beckel, Center for Public Integrity

People have strong opinions about cultural appropriation. Let’s all have a calm, measured, productive discussion regarding the issue by screaming about the people on the other side of the debate in our respective safe spaces —via Rod Nordland, New York Times

Congratulations everyone, Peak Slate has been achieved —via John Kelly, Slate

So what’s in the pipeline for tomorrow?

Though it might not be what you originally expected.

I wouldn't scoop myself on twitter. Story is about something else. But it's good. https://t.co/ieezQgUApH