Shock therapy kept me from overeating this Thanksgiving

I used the Pavlok electric shock wristband to keep from OD'ing on turkey this Thanksgiving.

Like most Americans, I lose all sense of self-control at the Thanksgiving dinner table, to the point where I usually end up on the couch, coated in a thin layer of turkey grease with my pants half-off. This year, however, I decided there would be no more of this gluttonous Thanksgiving tomfoolery. No more swigging beer and filling up on mini-hot dogs at 2:00pm, no more stripping down at the dinner table to make room for more stuffing, no more praying for a spontaneous bout of cholera to clean out my digestive system when dessert rolls around.

This year, I decided to preemptively keep from overeating with a little old-fashioned aversion therapy via the Pavlok, a “personal coach wearable” wristband that prevents you for engaging in any bad habits by giving you an electric shock. 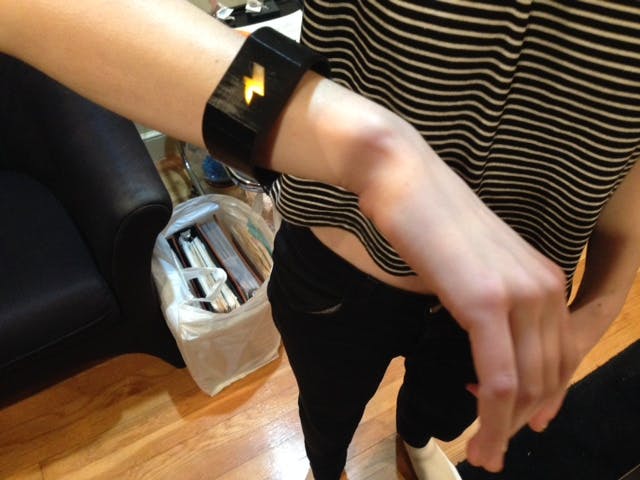 Inspired by Pavlov’s famous classical conditioning experiment, the Pavlok is a rubber wristband that essentially uses minor shock therapy to convince people to break their bad habits. Want to quit smoking, or steer clear or fatty foods, or stop procrastinating on Reddit? If a jolt of electric current won’t do the trick, nothing will.

Sound masochistic? Well, it definitely is. (In fact, when we first wrote about the Pavlok, we called it “FitBit for masochists.”) Despite the questionable ethics of shock therapy, which has largely fallen out of favor with the medical community in recent years, the Pavlok mostly relies on tried-and-true principles of aversion therapy to get you to change your behavior, as Pavlok creator Maneesh Sethi recently explained over the phone.

“The idea is everybody has these things they know they shouldn’t do,” says Sethi, who started investigating shock therapy when he hired a woman to slap him in the face to keep him from checking Facebook. “If you start to add a small amount of shock when you do stupid things, you can mostly just increase the awareness of your activity in your daily routine. I like to say that for the last 1,000 years, we’ve tamed environment, but we haven’t tamed ourselves.”

But could Pavlok be used to keep me from going to town on a bowl of mashed potatoes? Sethi says definitely: “By adding a shock while you eat, you train your lizard brain to associate the act of eating (or the type of food) with the shock—and it can effectively limit the drive for mindless eating that you normally have,” he says.

So yesterday, I strapped on the Pavlok before dinner. While the device can be controlled remotely by another party via an app, I didn’t want to entrust it with my boyfriend. I’d changed the channel on the Knicks game to a Full House rerun the night before and I didn’t want to give him the satisfaction of retribution via electric shock. So I decided to shock myself manually, by clicking the lightning bolt twice on my wrist.

While activating the Pavlok manually might sound counterproductive to the aim of the device, Sethi says his team’s research showed that self-applied shock is as or more effective than automated shock. Having the Pavlok on your wrist in itself “opens up the awareness of your habits,” he says. “It makes you ask yourself, wait, why am I hungry again?”

It felt like someone was plucking out my arm hair with a pair of pincers.

At 7:30, it was time for dinner, so I took a normal-sized helping and headed to the table. After tucking into a few bites of turkey, potatoes, and brussel sprouts, I realized my plate was already half gone, so I decided to give myself a small shock. It didn’t keep me from eating more, but when everyone else at the table decided to get another helping, I gave myself another small shock and realized I actually wasn’t very hungry. For the very first Thanksgiving ever, I didn’t go to bed feeling like a grease-covered Macy’s Day Parade balloon. 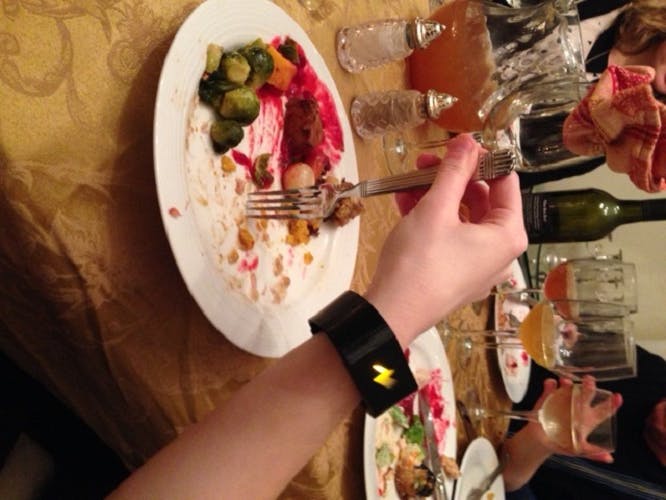 I’m not sure if I didn’t overeat this Thanksgiving as the result of using the Pavlok, or because I’d had about a dozen chicken nuggets for lunch a few hours before. I still don’t know if shock therapy is necessarily the best or most ethical way to change behavior, especially when it can be self-administered without requiring the discretion of a licensed therapist. 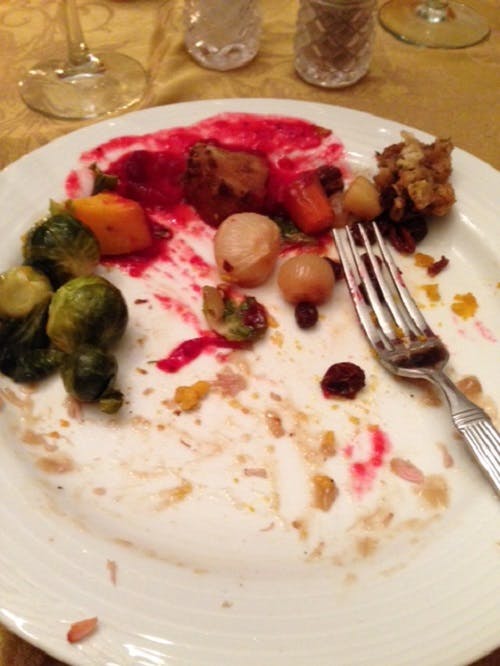 Although Sethi assured me the shock was perfectly safe (it’s at two milliamps, and the government minimum for shock therapy was 10 milliamps) when he told me he uses the Pavlok to shock himself at least 75 times a day, I became even more convinced that it wasn’t necessarily the healthiest of therapeutic tools.

That said, I don’t doubt for a second that the Pavlok can work. Sethi is right about one thing: While we might think we have enough self-discipline to avoid falling into the trap of Pavlov’s dogs, everyone still has their vices that can’t be overcome by sheer willpower. The Pavlok might be a masochistic novelty, but if nothing else, it’s a testament to the fact that we really aren’t much more than our own “lizard brains.”

Although Sethi was excited to hear that I was using the Pavlok to curb Thanksgiving table overeating, he did caution me that there was one function he wasn’t ready to use Pavlok for: Controlling your own thoughts. While he has friends who use Pavlok to help prevent obsessive, self-critical thoughts, “I always get worried about what will happen, and what curbing your thinking process means in the long run,” he says. “It’s a tough one.” 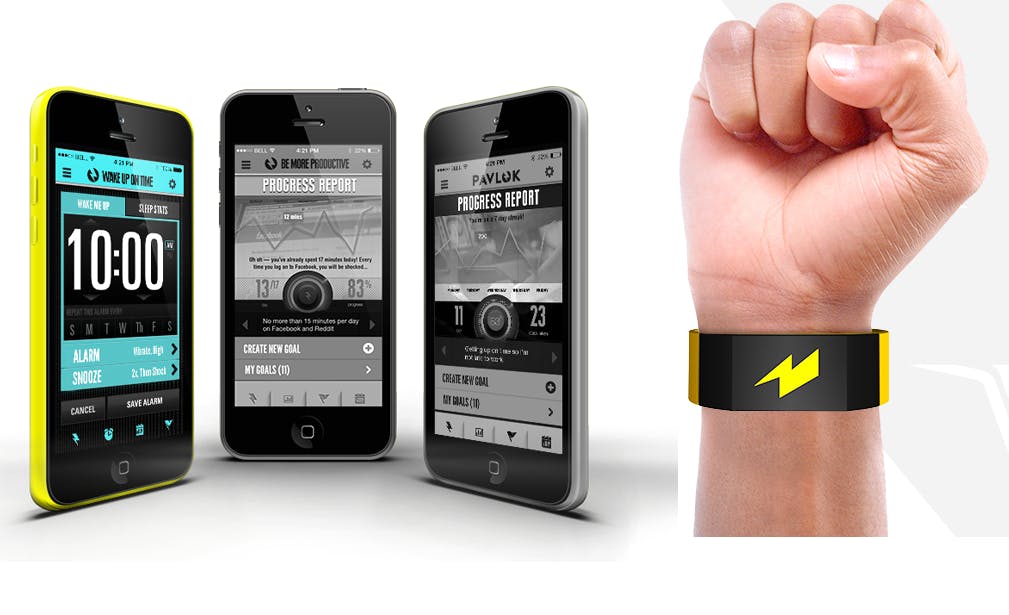 There’s a pretty thin line there, between controlling your actions and controlling your thoughts. And truly, I can easily see the argument that using the Pavlok to curb your eat is a slippery, even dangerous slope.

As someone who tends toward having an onslaught of self-critical thoughts myself, I will admit to using the Pavlok whenever any lingering doubts floated in and out of my mind. And I don’t know if I’m a masochist, but I must also admit that receiving the shock felt like getting a jolt of espresso directly injected into my veins, with the end result being that those doubts gradually faded away.

Is a shock therapy wearable necessarily the healthiest way of preventing overeating, or even obsessive-compulsiveness? Probably not.

That said, maybe it’s just my lizard brain speaking, but I’d be lying if I said it wasn’t at least a little effective: Today, I was more than able to button each button of my pants.