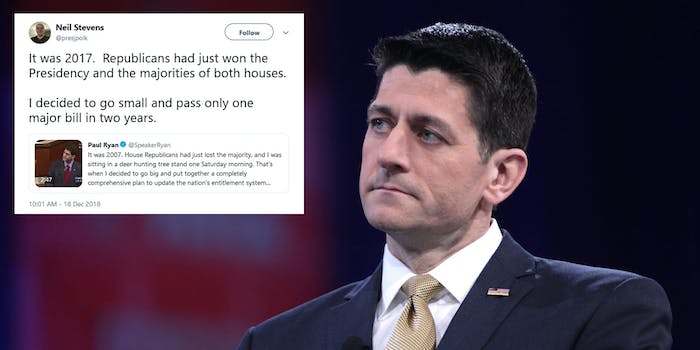 It's a six-part video series.

House Speaker Paul Ryan is marking his final days in Congress by posting a documentary-style video series on Twitter—and it is not going over well.

Ryan, who announced earlier this year he would leave Congress at the end of this term, began posting the videos, part of a series called “Decades in the Making,” that highlight the tax reform law passed in 2017.

The videos are essentially a hype video for the House speaker and the Tax Cuts and Jobs Act of 2017, with soaring music and numerous people talking about how hard Ryan worked on the law.

The episode titles are:

They all show various members of Congress paying tribute to Ryan’s work, peons Ryan is posting, congratulating himself for his work in revamping the tax code last summer.

However, online there was a different kind of reaction. That’s because a lot of the videos aren’t grounded in reality.

The jokes about the documentary-style series came quickly.

Taking a victory lap as the stadium is being evacuated https://t.co/QtGpe7wJZm

Your plan worked better for the deer than it did for the rest of us. https://t.co/zkIZtEXamn

It was 2017. Republicans had just won the Presidency and the majorities of both houses.

I decided to go small and pass only one major bill in two years. https://t.co/oaSJoArm8u

Ryan calling the bill a decade in the making was somewhat laughable, given how slapdash the tax cut actually was, rushed through before congresspeople were given a chance to fully read it.

Even members of Ryan’s own party weren’t confident in what they voted for.

There is no way that that the Tax Cuts and Jobs Act would be the law of the land if we had just started last year. It took years of work in the @WaysandMeansGOP committee, and that’s the reason we were able to hit the landing in 2017. pic.twitter.com/sewdrCufWG

They were literally penciling shit in at the last minute.

Another of Ryan’s videos talked about how his big dream included reforming entitlements.

It was 2007. House Republicans had just lost the majority, and I was sitting in a deer hunting tree stand one Saturday morning. That’s when I decided to go big and put together a completely comprehensive plan to update the nation’s entitlement system and reform the tax code. pic.twitter.com/NNafZREowl

Ryan never quite got around to reforming entitlements, despite promising to tackle them after passing the tax cut.

Ryan, who prided himself as a staunch fiscal hawk, also didn’t address the ballooning deficits his tax cut caused.

And just today, a study revealed that bonuses to workers this year were up a grand total of two cents thanks to Ryan’s new tax cut.