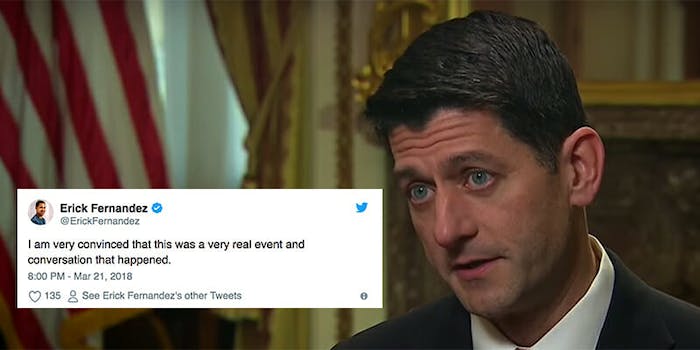 'I am very convinced that this was a very real event.'

Ryan’s digital communications director, Caleb Smith, tweeted a very peppy text conversation Thursday where a “buddy” of his shared the fortuitous news of his tax refund—and the internet was like “yeah, sure.”

A buddy of mine just texted me to share the good news that his family will be seeing much higher take-home pay as a result of the Tax Cuts and Jobs Act. He is a homeowner, a Democrat, and now, a believer in the power of tax reform. pic.twitter.com/QWTOvTGtXf

The “buddy” thanked Smith for the tax wisdom he apparently bestowed “during pizza,” which is only the second weirdest turn of phrase included in the message (“thanks Trump?!” is the first). The ingratiating tone feels as authentic as President Donald Trump’s hair.

Fake, but if by any chance it is real your friend is a fuckin dork

"Good day, my dear chum! I wanted to follow up via textual transmission re: the topic of tax reform which we discussed together during a root-beer float down and the old neighborhood malt shop last Tuesday, the 13th. I was researching the new tax code and imagine my surprise wh

You don’t remember the time he and the old gang got together? Caleb, Bob Human, Vincent Adultman… pic.twitter.com/lnNt5mo5kw

I am very convinced that this was a very real event and conversation that happened.

“During pizza” lol. Like they have a standing appointment for pizza every week, where they discuss govt affairs. “Hey friend, remember that time during burgers when we discussed responsible gun control? I’m really glad you brought those considerations to light during burgers.”

The completely real, not at all made up story about tax reform is on par with Ryan’s continued mission to convince everyone that his tax bill is a good thing and definitely not measly short-term compensation in exchange for adverse consequences in the long run.

Last month, Ryan was dragged by the internet after he gleefully bragged that a woman’s weekly paycheck increased by $1.50—just enough to cover her Costco membership for the year.