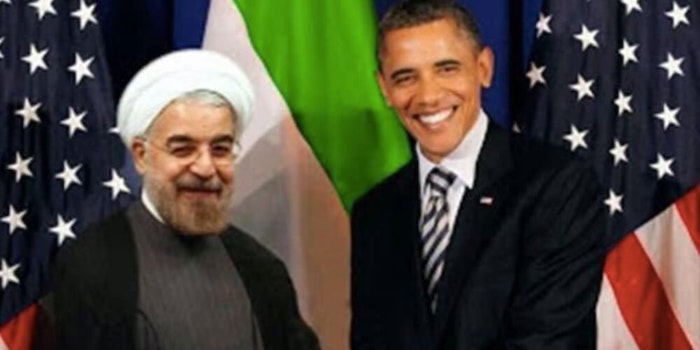 The giveaway? Obama doesn't have two thumbs on his left hand.

Adding on to what has been a wild week of political news (and it’s only Monday, folks), Rep. Paul Gosar (R-Ariz.) tweeted a doctored photo of former President Barack Obama and Iranian President Hassan Rouhani shaking hands.

“The world is a better place without these guys in power,” he wrote with the picture.

Given this past week’s strike on Iranian general Qassem Soleimani, it’s pretty clear that Gosar is mistaking the doctored image of Rouhani for the deceased man.

The world is a better place without these guys in power. pic.twitter.com/gDoXQu9vO5

However, the photo is actually cobbled together from two images–one of which is Obama shaking hands with former Prime Minister of India Manmohan Singh, as pointed out in reporter Aaron Blake’s tweet.

The actual image is of Obama and Indian PM Manmohan Singh. pic.twitter.com/CfO8AhyBq0

Most of the criticism Gosar is receiving online comes not from mistaking Rouhani for Soleimani, but for publishing a doctored photo on his official Twitter account.

“It’s disgusting that a U.S. representative would disseminate misinformation like this,” former director of the U.S. Office of Government Ethics Walter Shaub wrote.

Several users took the opportunity to reference Gosar’s family, who created a television ad encouraging Arizona voters not to vote for him.

One tweet features an image of an empty room with the caption, “Here’s a photograph of all the Gosar family members who love & respect Paul.”

Here’s a photograph of all the Gosar family members who love & respect Paul. pic.twitter.com/9fjuo5Njgy

When I first saw your siblings come out and say they couldn’t stand you I thought to myself…man that’s harsh.

It’s worth noting that tweeting doctored photos is not necessarily against Twitter’s terms of service, unless they are displaying misleading information regarding voting and means of registering to vote.

For his part, Gosar is saying that he knew the photo was edited. He wrote that he stands by his original tweet and that the world will be better off without Obama and Rouhani as presidents.

2. The point remains to all but the dimmest: Obama coddled, appeased, nurtured and protected the worlds No. 1 sponsor of terror. The world is better without Obama as president. The world will be better off without Rouhani.