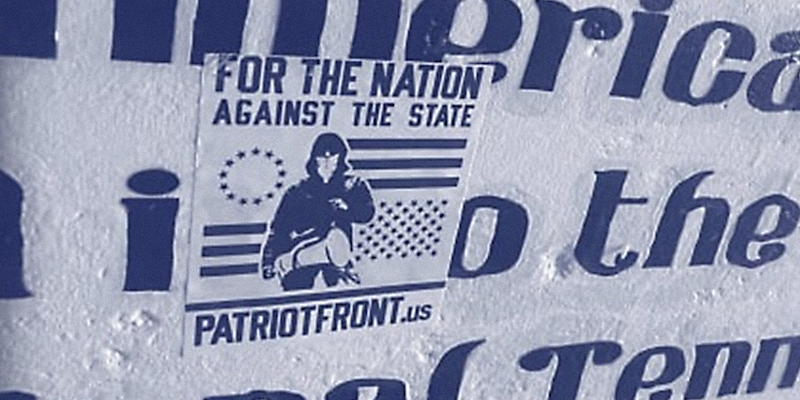 Patriot Front claims it posted 290 'promotional materials' in Virginia in the past two months.

The white supremacist Patriot Front is being sued for defacing a mural dedicated to a trailblazing Black tennis star. The suit alleges that the group’s actions violated the Ku Klux Klan Act and Virginia state law.

The federal lawsuit being brought by the Lawyers’ Committee for Civil Rights Under Law is based on Patriot Front allegedly vandalizing and destroying parts of a mural dedicated Richmond, Virginia native Arthur Ashe in October 2021. Ashe’s storied tennis career includes being the first Black man to win Wimbledon. He died in 1993.

In 2017, Ashe’s hometown honored his legacy with a mural in a public park. In October 2021, it was vandalized and marked with Patriot Front’s insignias and signage.

At the time, Police Chief Gerald M. Smith reportedly said of the vandalism, “Hate will not be tolerated in Richmond.”

On Tuesday, the Lawyers’ Committee filed a federal case against Patriot Front, leader Thomas Rousseau and other members of the group on behalf of two anonymous plaintiffs. The suit alleges that Patriot Front and its members conspired to violate the plaintiffs’ civil rights as protected by the KKK Act of 1871 and committed intimidation based on racial animosity, which is prohibited under Virginia law.

“Patriot Front’s ideology is rooted in a deeply racist belief system shared by its members. For nearly a year, the group publicly antagonized & destroyed property in the city of Richmond, leaving residents upset, anxious, and scared,” the Lawyers’ Committee tweeted about the case.

The nonprofit Lawyers’ Committee also argues that allowing Patriot Front to continue its actions unchecked threatens the safety of Black people around the country.

A release about the case notes that Patriot Front has a history of vandalism both nationally and in Richmond.

Patriot Front didn’t immediately respond to an inquiry sent via a form on its website on Wednesday.

This is just the latest legal entanglement for the racist group. In June, multiple Patriot Front members were charged with planning a riot at a Pride event in Idaho. Last month, a veterans’ group released a playbook on how to hold the group and its members legally accountable for its vandalism and alleged acts of racist violence.

The Daily Dot found dozens of posts about Patriot Front placing what it calls “promotional materials” in the city and surrounding areas in a Telegram channel dedicated to its actions around the country.

One post from October 2021 shows a Patriot Front flyer over the Arthur Ashe mural.

In November 2021, Patriot Front wrote on its main Telegram channel that it had placed 290 “promotional materials” in Virginia in the previous two months.

The case against the group alleges that this pattern of coordinated behavior and top-down leadership provide sufficient justification for suing Patriot Front, its leadership, and roughly two dozen other unidentified members for vandalizing the Ashe mural.

“The vandalization of the mural was not a spur of the moment decision, but rather was carefully planned,” the complaint states. It includes numerous images that are purportedly of Patriot Front defacing the mural. The plaintiffs say that Patriot Front filmed this action and put the video online as part of its recruitment efforts.

The case says that residents of the majority-Black neighborhood were terrorized and frightened by the vandalism. The plaintiffs, who live nearby, reportedly subsequently avoided the park and feared being targeted by Patriot Front.

The KKK Act prohibits two or more people conspiring “for the purpose of depriving, either directly or indirectly, any person or class of persons of the equal protection of the laws, or of equal privileges and immunities under the laws ….” It also provides a right to sue in civil court for violations of the act.

“Our clients are defending their neighbors in the face of naked harassment and intimidation. It takes courage to stand up to hate,” Arthur Ago, director of the Lawyers’ Committee’s Criminal Justice Project, said in a release. “Patriot Front’s attempt to erase the life and achievements of Arthur Ashe, a revered son of Richmond, will not go unpunished.”