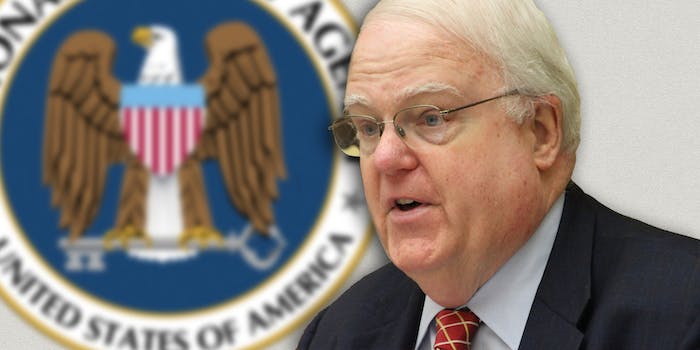 There are a dozen similar bills out there already, but none are near as ironic.

Now that it’s 2013, can you imagine how embarrassing it must feel to have authored the Patriot Act a dozen years earlier? Especially considering that we live in an age where Americans are increasingly outraged that the National Security Agency tracks their phone calls—an act made legal through a secret court interpretation of that very law.

The Patriot Act’s author, Congressman Jim Sensenbrenner (R-Wis.), is going to try and fix it.

He’s introducing the USA FREEDOM Act, a bill specifically aimed at countering the portions of the Patriot Act that were interpreted to let the NSA collect telephone metadata in bulk.

Sensenbrenner’s stance—he opposes bulk collection of American calls, rather than just tracking specific terrorism-related suspects—isn’t new. He’s been vocally opposing that interpretation of his infamous bill since former NSA contractor Edward Snowden first leaked evidence of the program in June. He voted for Congressman Justin Amash (R-Mich.)’s attempt to defund the program. And on Wednesday, he wrote to U.S. Attorney General Eric Holder that the “collection of a wide array of data on innocent Americans has led to serious questions about how government will use—or misuse—such information.”

The USA FREEDOM Act, as Sensenbrenner explained Wednesday to a laughing crowd at a Cato Institute talk (he wasn’t laughing), is an absurdly long acronym, standing for United and Strengthening America by Fulfilling Rights and Ending Eavesdropping, Dragnet Collection, and Online Monitoring. According to a fact sheet a Sensenbrenner aide provided to the Daily Dot, the bill is U.S. citizen-centric but would address the bulk of privacy advocates’ concerns.

That includes ending bulk metadata collection, requiring Foreign Intelligence Surveillance Courts to have a privacy advocate present, and increasing oversight of the NSA’s stated practice of discarding intelligence if it finds out it’s that of an American not considered a target of an ongoing investigation.

However despite public, and possibly congressional, support for those sentiments, it’s unclear if Sensenbrenner’s bill will ever get off the ground. There are more than a dozen NSA reform bills currently before Congress. Besides, Congress isn’t even working right now.