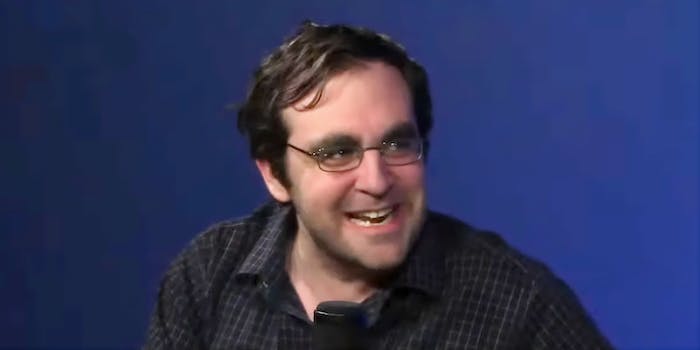 Patrick Howley, a politics reporter at the far-right publication the National File, is no stranger to controversy. But his most recent reports ahead of 2020 are cementing him in the annals of election misinformation.

His posts, which have been amplified by Donald Trump Jr., bank on specious anonymous sources, which has led even the far-right to question the legitimacy of his work.

Now, he’s facing a lawsuit for his scoops.

Howley has a history of blogging for right-wing outlets and a history of leaving those outlets on bad terms, even once going as far at Breitbart to express “skepticism” following a colleague’s assault. He also had to leave a role at the Daily Caller over racist, sexist tweets.

Howley then helped found Big League Politics, a conspiratorial site that has been called a home for people who find Breitbart too “reasonable.” From there, he reportedly went to the Epoch Times, another news organization not known for its ethics in reporting.

Why Howley has continually left organizations that don’t have strenuous standards for publishing is unknown. But his recent work may offer some insight.

In his latest, Howley makes a series of lofty claims, all based on anonymous sources and an unidentified “handwriting expert.”

Published on Oct. 26, Howley claims an “EXCLUSIVE SOURCE” had access to former Vice President Joe Biden’s daughter’s diary and that it “Details ‘Not Appropriate’ Showers With Joe As Child.”

The story, without concrete evidence, alleges Ashley Biden, the daughter to Democratic nominee Biden, “took part in ‘probably not appropriate’ showers” with her father.

“After declaring she was ‘here for sexual trauma’ in the previous entry, on page 23 of the diary, dated January 30, 2019, the author explores the topic of sexual abuse and how it may have led to her overactive sex drive,” the piece states.

The credulous report, which has yet to be picked up by other conspiracy theory blogs, is even being taken with a grain of salt from the far-right, who have no problem going to extremes to smear Joe Biden.

“Unite the Right” attendee Patrick Casey, who leads the white nationalist organization the American Identity Movement, previously known as Identity Evropa, expressed a need on a recent DLive stream for the story to be further questioned.

Howley didn’t return a request for comment from the Daily Dot regarding the story or why he’s left numerous publications.

This isn’t the only Howley story that’s dubious.

In the past week, Howley published a now-debunked report claiming that Arizona Democratic Senate candidate Mark Kelly wore an Adolf Hitler costume to a college party.

“Mark Kelly’s full yearbook page is seen here, including a photo of him wearing what appear to be the same pair of sunglasses used in the Hitler costume,” the article says.

It turns out the right-wing smear campaign was conceived by the Senate Leadership Fund and conservative super PAC employee Karim Addetia. That debunked Halloween yearbook photo was then sent to Howley at the National File.

The false and “baseless” report was then amplified by Donald Trump Jr.

Late on Tuesday evening, news broke that the Kelly campaign had filed a defamation lawsuit against Howley and the National File over the story in Pima County, Arizona.

Howley still has a home on right-wing conspiracy theorist Alex Jones’ InfoWars though, where he screams and yells about the nation heading toward a civil war.

“The Republican Party answers to me,” he concluded.

The National File frequently publishes conspiracy theory pieces and attempts to dig up dirt on Democratic politicians. A website that ranks the trustworthiness of news sites believes the National File is “an extreme right Tin-Foil Hat Conspiracy website.”

In the past decade, far-right media has devolved into a haven for conspiracy theories and misinformation. That Howley has somehow managed to alienate himself from even that wing of conservatism might be his only impressive piece of work.