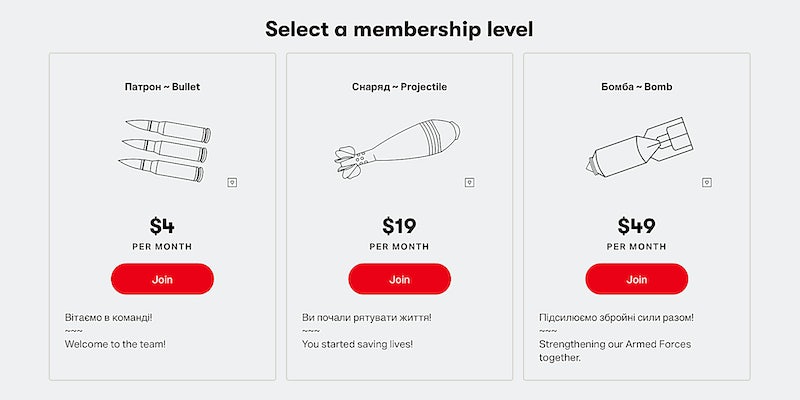 No, you can’t use Patreon to buy missiles for Ukraine (updated)

Update 3:14pm CT, Feb. 25: Patreon has banned the account for Come Back Alive, citing the organization’s training of military personnel.

“Patreon deleted the fund page. Without a warning. In a very difficult time for Ukraine,” Come Back Alive said on Facebook, according to VICE.

In deleting the page, Patreon said that “the website of the organization says they use contributions to finance and train military personnel” and thus cited its harmful activities policy in banning the organization.

A Patreon account out of Ukraine is raising eyebrows online after racking up more than 14,000 supporters in the wake of Russia’s invasion.

The account, known simply as “savelife.in.ua,” gained widespread attention on Thursday after it was seen listed on a Ukrainian government website.

A screenshot from one current patron urged users to support the account in order to help them buy “tanks and missiles,” leading many to believe not only that the account was government-run but that Patreon was profiting off of the military crisis.

In reality, the account is designed to highlight Ukrainian veterans.

Yet despite the belief among some that the account had been created after Russia’s invasion on Wednesday evening, it has been active since at least May 2020.

The claim that the account is run by the Ukrainian government in an effort to procure funds for weaponry is also inaccurate.

As noted in the account’s bio, savelife.in.ua is run by one of the largest charitable foundations in Ukraine, known as the “Come Back Alive Foundation.”

“The money raised here will fund the operations of our media and veteran divisions, visible to 2,500,000 of our Facebook followers,” the account states. “Our patrons will receive the stories, audio, and video that had only became possible due to their support.”

Specifically, supporters will be shown “the rehabilitation of Ukrainian veterans and their return to a peaceful life.”

While the Patreon account itself claims not to fund military efforts, the Come Back Alive foundation has previously helped Ukrainian soldiers in the war in Donbas by purchasing them everything from thermographic cameras and night vision devices to bulletproof vests

The allegation that supporters would be helping the Ukrainian military obtain munitions stems from the account’s membership tier list. Although everything from rifle ammunition to bombs are shown, the imagery is used only for marketing.

But the account’s massive surge in support has undoubtedly been influenced by the ongoing military conflict.

After Russia’s invasion this week, however, the account is now bringing in a staggering $436,966 per month thanks to its 14,590 supporters.

So while some may believe they are directly funding Ukraine’s defense efforts, the fact of the matter is that you can’t help the Ukrainian military buy bombs through Patreon.