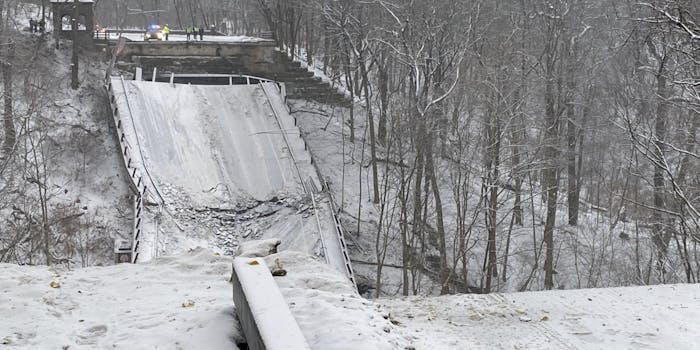 Friday, a bridge in Pittsburgh collapsed, injuring 10. The Fern Hollow Bridge broke Friday morning while traffic was on it, with pictures showing cars and a bus stranded on the broken concrete.

The collapse just so happened while President Joe Biden was visiting the area to tout his recently passed infrastructure plan. According to reports, Biden went and toured the area this morning.

In the wake of the disaster, Sen. Pat Toomey (R-Pa.) tweeted his well-wishes for the victims and said that his office was working to coordinate support.

“My staff has been in contact with local emergency personnel regarding the Forbes Avenue bridge collapse in Pittsburgh. We will continue to closely monitor the situation. Wishing a speedy recovery to those who are injured,” Toomey tweeted.

Twitter users though, were less than impressed with Toomey’s posting of support. They instead brought up that Toomey has vehemently criticized Biden’s infrastructure plan.

Toomey was a “No” vote on the $1.2 trillion plan, releasing a statement that called it “too expensive, too expansive, too unpaid for, and too threatening to the innovative cryptocurrency economy.”

While the bill passed, numerous Twitter users noted Toomey’s objection to it, especially after he offered the equivalent of “thoughts and prayers.”

Biden, for his part, pledged that the bridge would be repaired in part thanks to infrastructure funding. Toomey’s office did not respond to a request for comment from the Daily Dot.