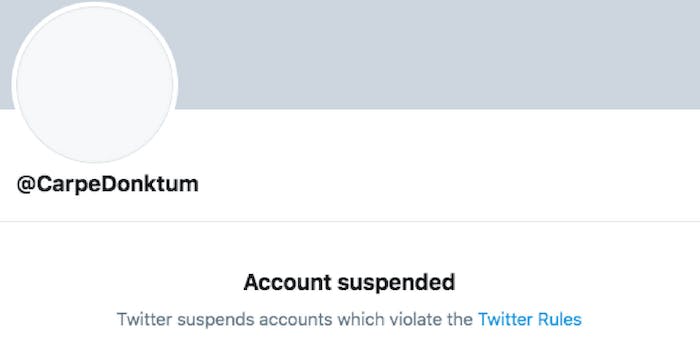 Pro-Trump meme creator Logan Cook, who goes by the handle @CarpeDonktum on Twitter, has been permanently suspended by the platform for “repeated” copyright complaints made against him.

A Twitter spokesperson told the Daily Dot late Tuesday evening that “per our copyright policy, we respond to valid copyright complaints sent to us by a copyright owner or their authorized representatives.”

The spokesperson also confirmed that Cook’s suspension would be permanent due to “repeated violations of this policy.”

Carpe Donktum has been an account favorite among conservatives. The meme-maker has even been frequently retweeted by President Donald.

Most recently, Cook posted a fake video that appeared to have aired on CNN, showing one white toddler and one Black toddler running away from each other.

The video was retweeted by Trump, later labeled by Twitter as “manipulated media.” The actual video that aired on CNN showed the two toddlers hugging each other.

In October of 2019, the meme creator was suspended by Twitter for the same type of copyright violation but eventually returned to the platform.

Following his meme-making successes in Trumpworld, Cook branched out to conduct interviews with right-wing personalities on his YouTube channel, which remains active.