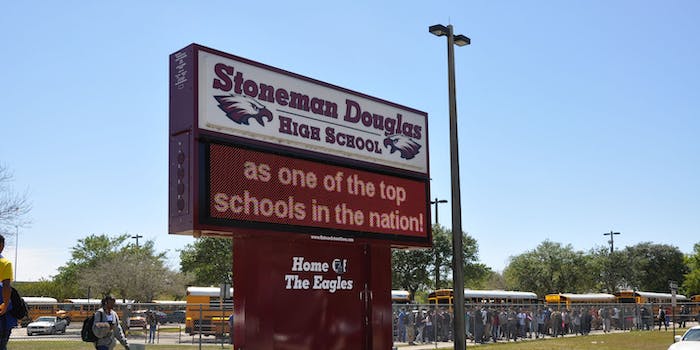 Victim’s father described it as proof the attack was ‘premeditated.’

The 19-year-old former student who murdered 17 people at Marjory Stoneman Douglas High School in Parkland, Florida, in February detailed his plans in three chilling videos recorded on his cellphone ahead of the attack.

In one video, the accused killer explains how he will carry out the mass murder, detailing the when and where.

“I’m gonna go take Uber in the afternoon before 2:40 (p.m.). From there I’ll go into—onto school campus, walk up the stairs, unload my bags and get my AR and shoot people down at the man—what is it?—the main courtyard, wait, and people will die,” he says.

In another video, Cruz reveals his desire for notoriety in carrying out the shooting, laughing as he does.

“I am going to be your next school shooter of 2018,” Cruz tells the camera in the first video. “It’s going to be a big event and when you see me on the news you will all know who I am.”

From there, he goes on to describe a motivation, which appears to be one of revenge, complaining and alleging that he had been called “an idiot and a dumbass.”

“You are all stupid and brainwashed by the political government programs. You will all see,” he says.

Cruz also names singles out a girl, whose identity is unclear, but who he says he will always love and who he will wait for in the “afterlife.” It has been reported that Cruz was abusive to an ex-girlfriend and stalked additional girls.

“Today is the day, the day it all begins,” the shooter announces in a third undated clip. “All the kids in the school will run in fear and hide. From the wrath of my power, they will know who I am.”

On Valentine’s Day, Cruz did as he said he would in the videos and took an Uber to the school, arriving on campus at 2.19pm, and commenced his attack.

The mass shooting sparked a national campaign for gun control legislation led, in part, by students of the school.

Andrew Pollack, whose daughter Meadow was among those killed on that day, told the South Florida Sun Sentinel that the videos were damning to any defense plea of insanity or abdication of responsibility.

“It just shows this kid was competent. This whole thing was premeditated murder,” Pollack said. “This kid knew exactly what he was doing.”