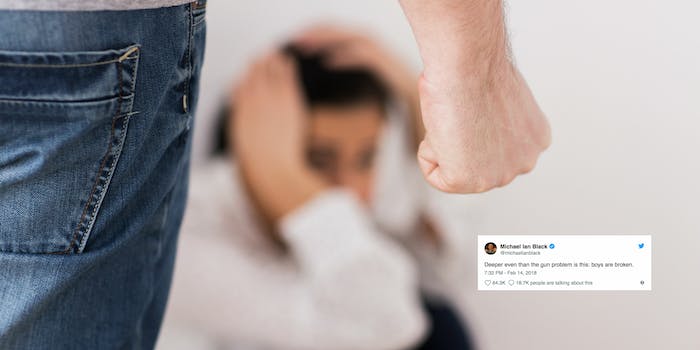 Before we get to mental illness, let's discuss homegrown misogyny and white superiority.

A day after the horrific school shooting in Parkland, Florida, President Donald Trump blamed the incident that left 17 dead on shooter Nikolas Cruz’s mental health. Republicans often point to mental illness when talking about gun violence so they can avoid addressing gun control, an obviously heated and divisive issue, especially when your party is heavily supported by the NRA.

However, when politicians refer to Cruz and other mass shooters as merely mentally ill, they aren’t just deflecting; they are humanizing shooters while stigmatizing people who suffer from mental health issues. Additionally, this emphasis conveniently shuts down the conversation our country is in dire need of having.

What we really ought to question, Neuilly said, are the cultural values that could contribute to deadly shootings. Near the top of that list is toxic masculinity.

“Deeper even than the gun problem is this: boys are broken,” comedian Michael Ian Black wrote in a series of tweets that went viral after the shooting. “The last 50 years redefined womanhood: women were taught they can be anything. No commensurate movement for men who are still generally locked into the same rigid, outdated model of masculinity and it’s killing us.”

Deeper even than the gun problem is this: boys are broken.

Like many mass shooters before him, Cruz mistreated women. One of his old classmates claimed he was abusive to his ex-girlfriend while a math teacher claimed he stalked another teen. Yet another student claimed that Cruz threatened an additional girl. (He also reportedly had a thing for killing animals.) Stephen Paddock, the Las Vegas shooter who killed 58 last year before killing himself, was reportedly abusive to his girlfriend. Elliot Rodger, who killed six people in Isla Vista, California, in 2014, claimed he did so because he was sexually rejected by women. In a manifesto written before his killing spree, Rodger wrote, “Who’s the alpha male now, bitches?” The list of shooters who have shown visceral hatred toward women goes on and on.

Which makes sense. The white supremacy group Republic of Florida has claimed Cruz as a member (even though local law enforcement denied that link). The teen also allegedly wrote in an online group chat that he hated “jews, ni**ers, immigrants” and he referred to white women who dated black men as “traitors.”

Cruz also, like many mass shooters before him, had big aspirations to join the military. Misguided young men often fantasize about joining the armed forces so they can kill legally, unleashing their aggression in a way that that is perceived by some as heroic.

But these are not things the media talks about when trying to create a profile of Cruz. One report depicted him as ostracized and lonely, calling attention to how he wasn’t a part his community’s “warm nest of promise and achievement.” The 19-year-old’s attorney referred to him as a “broken child.” Conversely, murder victim Trayvon Martin was portrayed in court as a thug.

The last 50 years redefined womanhood: women were taught they can be anything. No commensurate movement for men who are still generally locked into the same rigid, outdated model of masculinity and it’s killing us.

If Cruz was wasn’t white or American-born, another label would be slapped on him to serve as scapegoat: terrorist. But no matter how gruesome the killings are, if it’s done by a white man, people always seem to scramble to try to find a trigger that made them “snap,” something that set a “normal” person off. But these guys, none of these killers, snapped. They were all brewing with hate and aggression for a long time. Not addressing that in the media can only do further harm.

“The fact that white male terrorists have typically been humanized can be interpreted by potential copycats as their glorification, and thus spawn repeat incidents,” Neuilly said.

I know this well. I was just a speck in the large wave of young people who made copycat threats during the Columbine aftermath. I was 16 and bullied and I believed in the false narrative that the Columbine killers did it because they were abused by their classmates. I didn’t want to actually kill anyone, but there was some sort of morbid electricity that surrounded the 1999 shooting and its subsequent coverage, a kind of collective and contagious bloodthirst.

In reality, Columbine wasn’t about revenge for being bullied, not at all. Instead, the Marine Corps reject Eric Harris just wanted to kill as many people as possible. In fact, before settling on shooting up his school, he wanted to blow up Denver, but soon realized he was incapable of such a feat.

“He wanted to be remembered for committing the most deadly terroristic attack in United States history,” Dr. Peter Langman concluded in a Psychology Today report. The Columbine killers weren’t hurt, sad boys who snapped after systematic abuse by their peers. They were homegrown terrorists who spent nearly a year methodically planning their terror attack, plain and simple. I was wrong for taking part in a copycat threat, but I was also vulnerable to the message that the Columbine killers were merely tortured teens, beaten down by the system and suffering emotionally. They were portrayed this way because they were upper-middle-class white teens. What they did didn’t stem from mental illness. It was something far more sinister.

“It’s indisputable that a lot of these shooters want fame and committing an attack like this is pretty much the only guaranteed way to become famous in the United States for someone who doesn’t have exceptional talent or abilities,” Adam Lankford, a criminology professor at the University of Alabama, told the Daily Dot. “When you have a media that provides rewards for these individuals, that’s part of the problem. In other words, committing these crimes works.”

Lankford added that anyone held to celebrity status, whether in a positive light or not, and particularly in American culture, does have a profound influence on people. In the case of mass shooters, who are nearly almost all men, budding idealizers could see going on a shooting spree as an opportunity to gain status, even if it’s in a warped way. Lankford said that men are socialized in a way to be aggressive or assertive to get what they want and that can socialization can become muddled in men who are enraged and abusive. Killing as many people as possible is, unfortunately, a way of “gaining status.”

That’s exactly why Cruz pulled that fire alarm on Valentine’s Day. It was to up his body count, so that through aggression he could become as famous as possible. Those poor kids were just numbers to him, a way for him to get a ranking on America’s worst mass shooting scorecard.

Lankford said that we, the media, should take a harder look at how we cover such shootings. Ideally, the media should not give killers “free publicity” at all. But just easing up on shooter-focused coverage would help, he said.

Unfortunately, it’s unlikely that the media and the public will ever truly let go of their obsession with mass shooters. But if we are going to talk about these killers, let’s talk about a culture that values male aggression and status. Let’s talk about how copycat threats happen because these killers, white men, are portrayed more sympathetically than if they were of color.