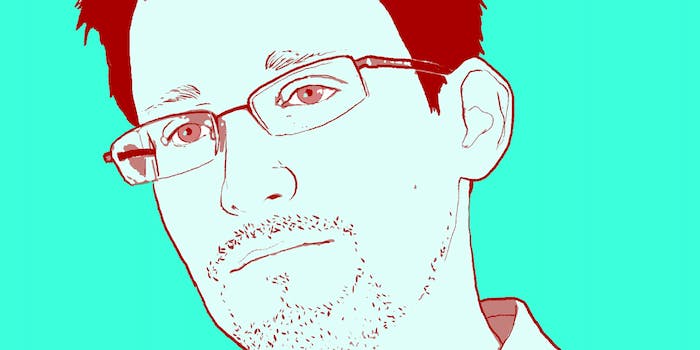 James Woolsey says Snowden has 'blood on his hands.'

In an interview with CNN’s Brooke Baldwin, Woolsey claimed terrorists were increasingly taking advantage of encryption to conceal their communications. This happened, Woolsey suggested, because Snowden revealed the extent of the U.S. government’s dragnet surveillance operations.

“The blood of a lot of these French young people is on his hands,” said Woolsey, “because of what he turned loose.”

Woolsey added that Snowden should not only be convicted of treason, but “hanged by the neck until he’s dead rather than merely electrocuted.”

In his attack on Snowden, Woolsey appeared to purposely ignore the facts already presented by French authorities to the public: The terrorists in Paris didn’t encrypt their communications, but coordinated the attacks instead using standard SMS text messages. Still, they weren’t stopped.

French police found a cellphone outside the Bataclan theater in Paris, where the majority of the 130 victims were killed. It was unencrypted, not to mention unlocked. It contained a map of the concert hall, and an SMS message in French: “On est parti on commence.” (“Let’s go, we’re starting.”) The data on the phone also alerted investigators to the location of a safe house used by the terrorists last Wednesday morning, according to local media.

In fact, a recent study conducted by Flashpoint Global Partners, a firm that specializes in uncovering threats on the Dark Net, found that “underlying public encryption methods employed by online jihadists do not appear to have significantly changed since the emergency of Edward Snowden.”

In a statement last week, the Information Technology Industry Council—whose members include Apple, Facebook, Google, HP, and Microsoft—thanked the national security community for its service, but added “weakening encryption or creating backdoors to encrypted devices and data for use by the good guys would actually create vulnerabilities to be exploited by the bad guys, which would almost certainly cause serious physical and financial harm across our society and our community.”

In an op-ed Wednesday, journalist Glenn Greenwald insisted Snowden’s disclosures didn’t tell the terrorists anything they didn’t already know. “The terrorists have known for years that the U.S. government is trying to monitor their communications,” he wrote.

Adds Greenwald: “What the Snowden disclosures actually revealed to the world was that the U.S. government is monitoring the Internet communications and activities of everyone else: hundreds of millions of innocent people under the largest program of suspicionless mass surveillance ever created, a program that multiple federal judges have ruled is illegal and unconstitutional.”