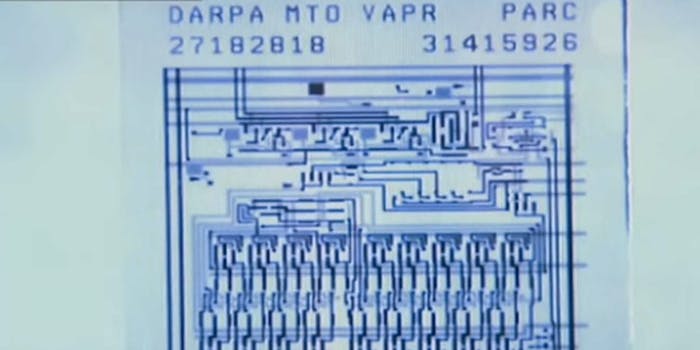 This computer chip will self-destruct in 10 seconds

The research arm of Xerox Corporation has developed a computer chip that can self-destruct with 10 seconds’ notice.

While the chips are manufactured out of the super-tough Gorilla Glass used in most smartphones, they’ve been treated in a way that builds stress into them. When the self-destruct switch is activated, it turns on a small resistor in the chip that heats up quickly and breaks the glass apart.

After the initial breakage, there is so much energy being released from the smashed, heated glass that its pieces continue breaking into still-smaller pieces for several seconds afterward, reports PC World. That’s precisely why a secretive agency like DARPA finds them valuable: Chips that can self-destruct offer a certain level of absolute security, protecting secrets at the hardware level.

“[The] electronics made for everyday purchases are durable and last nearly forever,” said DARPA program manager Alicia Jackson in announcing the VAPR initiative two years ago. “DARPA is looking for a way to make electronics that last precisely as long as they are needed. The breakdown of such devices could be triggered by a signal sent from command or any number of possible environmental conditions, such as temperature.”

Destructible computer chips could control sensors to surveil an area for a specified amount of time and no longer. If they fell into the wrong hands while containing sensitive information or powering an experimental gadget, they could remotely and instantaneously destroy themselves to great protective advantage. DARPA is already a tremendously secretive agency with interests that range from high-level robotics to interstellar travel.

You might consider its VAPR initiative a “Snapchat for hardware.”