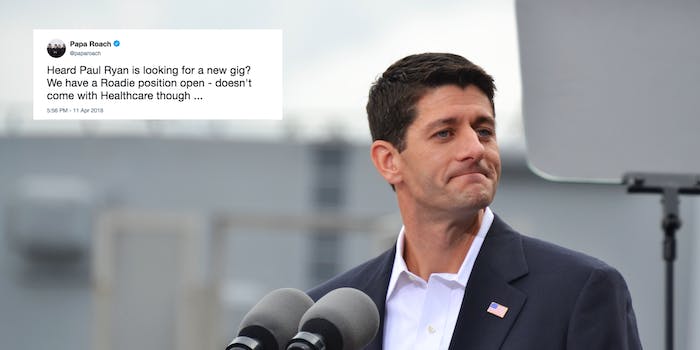 An old internet gag came back to life.

Speaker of the House Paul Ryan (R-Wisc.) announced on Wednesday that he would not be seeking reelection this year but imagine his excitement at having already been offered a new job, as a roadie for rockers Papa Roach.

The opportunity comes just one year after the defeat of the Republican Party’s Obamacare replacement bill, when Republicans were grappling with the massive failure of their signature legislative priority.

In the wake, one internet wisecracker imagined Ryan listening to the alternative-metal band’s early-2000s hit”‘Last Resort,” which many mainstream organizations believed to be true.

ooof the kicker on this New York Times story… pic.twitter.com/YO6Wq3k5vK

So, when the Republican lawmaker confirmed he would not be running for another term in office, people were already speculating about a pairing.

Then the band promoted the vacancy to him. There is a catch, though. Thanks to Ryan’s inability to provide a solution to Obamacare, the new position doesn’t come with healthcare.

Heard Paul Ryan is looking for a new gig? We have a Roadie position open – doesn't come with Healthcare though …

The internet, as expected, loved it.

Other fans were a little pissed at the rockers’ Twitter political jab, but they reassured everyone that it was “all in good fun.”