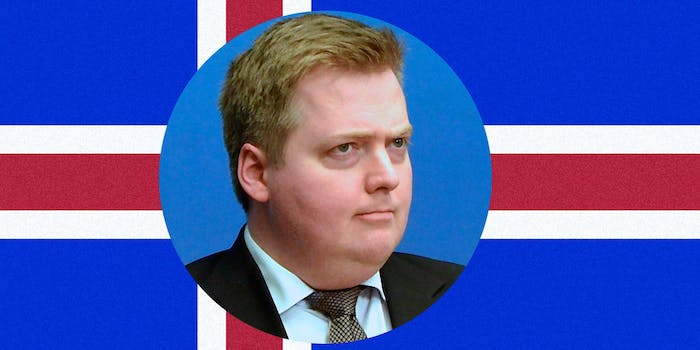 Leaked records reveal the secret offshore holdings of Iceland's leader and his wife.

A massive leak of financial documents about Iceland’s prime minister, one of the 12 current and former world leaders whose records appear in the now-infamous Panama Papers, has sparked calls for the country’s parliament to hold a no-confidence vote against him.

The records, part of a yearlong investigation by the International Consortium of Investigative Journalists, suggest that Prime Minister Sigmundur Gunnlaugson concealed millions of dollars in an offshore company established by the Panamanian law firm Mossack Fonseca. Among his hidden investments were significant bonds of major Icelandic banks—investments he later failed to disclose when he entered parliament.

You will find streaming from the protests in Iceland today below. https://t.co/nxmp0IQ4mm

Jonsdottir told the Daily Dot via a Twitter direct message on Monday that Gunnlaugsson had revealed himself as the “archetype of the unethical politician” and “a brat” for walking out during an unscripted television interview. She also extended her gratitude to the “whistleblower” behind the so-called Panama Papers.

“We feel humiliated and we want to stress that not everyone in Iceland is like the prime minister,” Jonsdottir said. “Let’s hope that [Gunnlaugsson’s] party will stop behaving like a cult and take on some responsibility by demanding [he] resign, not tomorrow but tonight, because every minute this man is in power, our reputation as a nation is at stake.”

Gunnlaugson, a center-right leader who began his four-year term in 2013, disputed the notion that his offshore dealings were controversial in a television interview on Monday. He also said that he would not resign.

“The government has had good results,” he said. “Progress has been strong and it is important that the government can finish their work. I will listen to the peoples’ stand in the next elections.”

But the hastiness of the prime minister’s response—he later walked out of that interview—and the chorus of condemnation that followed underscore the significance of the far-reaching tax-evasion leaks, which are said to include the holdings of more than 140 politicians and public officials and as many as 214,488 entities registered for individuals and companies worldwide.

Wintris, Inc., a company reportedly established by Mossack Fonseca in the British Virgin Islands, was co-owned by Gunnlaugsson and his wife, Anna Sigurlaug Pálsdóttir. According to the leaks, Gunnlaugsson sold his half of the company for $1 to his wife in December 2009, the day before a new law would have required him to declare his ownership as a conflict of interest.

But leaked documents reveal the extent of the Gunnlaugsson family’s personal stake in negotiations with creditors during Iceland’s 2008 financial crisis. Pálsdóttir’s holdings include bonds in three failed banks: Landsbanki, Glitnir, and Kaupthing. Her husband is involved in negotiating their bankruptcy claims.

The firm owned by Pálsdóttir claimed assets of more than 500 million Icelandic crowns, or more than $4.1 million.

Police on Monday began cordoning off Austurvöllur Square in the capital city of Reykjavik, which they called a “standard” precaution, ahead of a 5pm protest expected to draw more than 10,000 demonstrators.

Mossack Fonseca, the law firm whose documents were leaked, said in a statement that, while it was regulated “on multiple levels, often by overlapping agencies,” it was ultimately responsible for the management of its client’s companies.

“Excluding the professional fees we earn, we do not take possession or custody of clients’ money, or have anything to do with any of the direct financial aspects related to operating their businesses,” a spokesman told the Guardian.

The firm, which said it regrets any “misuse” of its services, added that “instances” cited in reports represent “less than 1%” of the companies it has founded.

“This fact shows that vast majority of our clients use companies we incorporate for legitimate uses,” it said, “and that our due diligence and compliance procedures are overwhelmingly successful in thwarting those who have other intentions.”