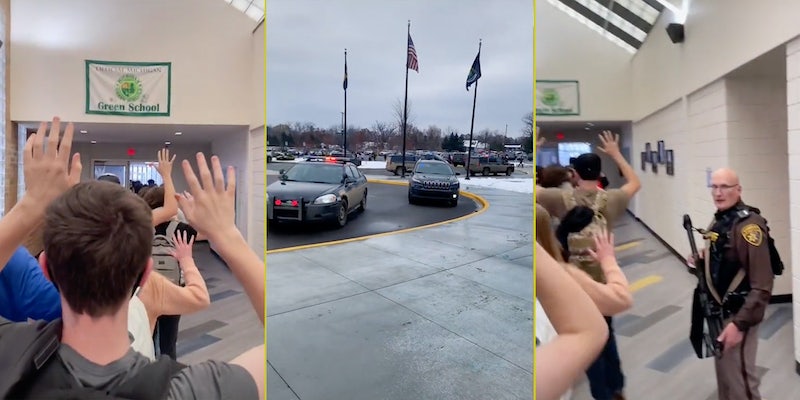 'I'd be the one laughing because it's either that, or a fill-on panic attack.'

A viral TikTok video shows a survivor of the deadly Oxford High School shooting in Michigan laughing on her way out of the building. The video helped refocus conversation on unexpected effects of trauma—even seemingly unusual reactions like laughing—as expected and normal.

@aydensanders_ filmed and posted the video, which shows students being filed out with their hands raised. During the first third of the video, he turned his camera phone toward a female student, who chuckled with her camera.

It would not seem to be a usual reaction based on the deadly events that day. However, mental health professionals often recognize smiles and laughter by people as normal trauma responses, a disassociation/defense mechanism to separate themselves from the trauma’s scale and depth.

In the deadliest shooting of the year, 15-year-old Ethan Crumbley opened fire at Oxford High School in Oakland County, Michigan, on Tuesday afternoon. He shot 11 people, killing four students—Hana St. Juliana, 14; Madisyn Baldwin, 17; Justin Shilling, 17; and Tate Myre, 16—and leaving several other students critically and seriously wounded. According to the New York Times, Crumbley was charged with “one count of terrorism causing death and four counts of first-degree murder, which could lead to a life sentence if he is convicted.”

The 15-year-old is being held without bond at the Oakland County Jail. His parents, who purchased the weapon for him, have been charged with involuntary manslaughter.

Education Week, which tracks similar events, reported that there have been 29 school shootings in 2021.

In the video comments, @aydensanders_ was forced to combat overly racist, politicized, and hateful speech from the section. But in large, though, the comments were filled with well-wishes and commendation for having the wherewithal to record his experiences. One commenter noted, “For those in the back: LAUGHING IS A COMPLETELY NORMAL TRAUMA RESPONSE.”

One young woman even said, “I’d be the one laughing because it’s either that, or a full-on panic attack.”

Another person, defending the videographer’s polite words toward law enforcement, said, “HIM SAYING THANK YOU IS NOT HIM BEING SARCASTIC. I’M SURE HE WAS TERRIFIED FOR HIS LIFE AND JUST WAS GRATEFUL TO BE OUT ALIVE.”