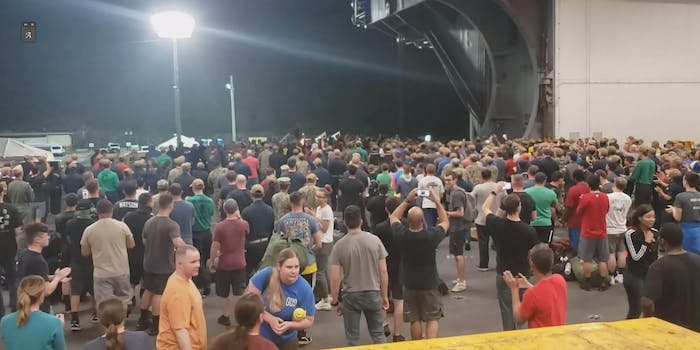 They don't seem to agree with the assessment that Capt. Crozier exhibited 'extremely poor judgment.'

The crew of the ousted captain of the Theodore Roosevelt aircraft carrier apparently takes a far different view of him than Navy leadership who removed him from his post for “extremely poor judgment.”

In a pair of video videos, Captain Brett Crozier’s crew cheers and chants his name as he leaves the ship. The sailor who shot one of the videos refers to him as “the best captain I ever had,” “the GOAT,” and a “man of the people.”

Crozier, a former Navy aviator, made headlines earlier this week over a leaked letter he’d written begging Naval leadership to remove his crew from the ship and quarantine them in Guam, where the ship is stationed, amid a coronavirus outbreak. More than 100 sailors from the Theodore Roosevelt have the virus, comprising more than 10 percent of the cases across the entire military.

In the press briefing announcing Crozier was being removed from his post, acting Secretary of the Navy Thomas Modly said that Crozier created a “firestorm” by too widely disseminating his memo requesting relief, CNN reports.

Modly added that Crozier violated the chain of command and allowed “the complexity of his challenge with the Covid breakout on the ship to overwhelm his ability to act professionally.” He said that although Crozier isn’t accused of leaking the memo, by sending it to so many in an unsecured email, he created the conditions that led to it being leaked.

In the letter, Crozier begged leadership to quarantine the thousands on the Theodore Roosevelt.

“The spread of the disease is ongoing and accelerating,” he wrote. “Removing the majority of personnel from a deployed U.S. nuclear aircraft carrier and isolating them for two weeks may seem like an extraordinary measure. … This is a necessary risk.

“Keeping over 4,000 young men and women on board the TR is an unnecessary risk and breaks faith with those Sailors entrusted to our care.”

Crozier’s extraordinary plea for help appears to have earned him respect and appreciation from his crew and many around the world.

Many were moved by the videos, and supportive of Crozier’s actions, which they viewed as a necessary, if exceptional, attempt to save lives.

On Wednesday, the Daily Dot reported on accusations of serious deficiencies with the Navy’s response to the coronavirus pandemic.

A public health expert whose spouse is a Naval medical officer stationed overseas called it “a gross mishandling” that’s putting lives at risk. They blamed top leadership for the problems.