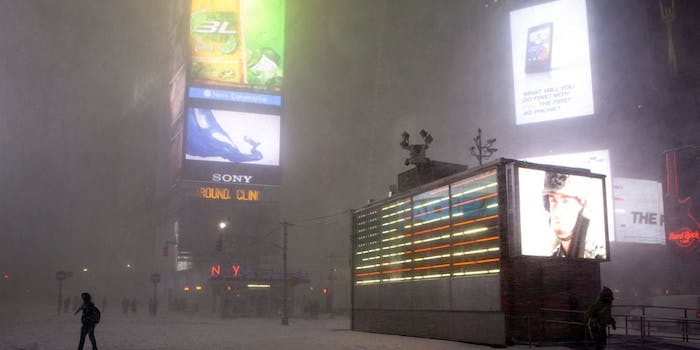 One map shows what Americans really think about global warming

Yale researchers create online tool that shows just how varied opinions on global warming are in the U.S.

Public opinion polling shows that 52 percent of U.S. citizens are worried about global warming. With that information, it might seem reasonable to assume that, walking up to any random person in America, there’d be a 1-in-2 chance of them expressing worry about the planet’s rising temperatures.

But you would be wrong. It turns out that where you ask the question can make all the difference.

In an attempt to further understand what Americans think about global warming, a team of researchers from Yale have put together the Yale Climate Opinions Map, a detailed and interactive tool for understanding how views on climate change vary in different parts of the United States. 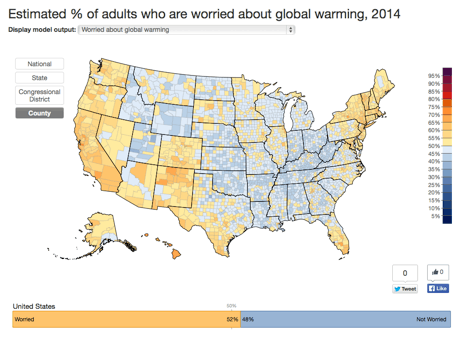 To help understand the way local governments and institutions respond to climate change, the researchers have compiled six years worth of polling data on the issue and organized it by state, city, congressional district and county, providing a nuanced view of how Americans really feel about the issue.

“A loose analogy is the invention of the microscope—suddenly we can see the rich patterns in public understanding, risk perceptions, policy preferences, and behavior at the state and local levels for the first time,” said Anthony Leiserowitz, director of the Yale Project on Climate Change Communication, in an email.

From compiling this data, Leiserowitz and his colleagues found just how varied global-warming skepticism can be in various parts of the country. Though nationally the split is about 50-50, there is a wide range depending on which part of the country respondents called home. The rate at which people worry about global warming was as low as 38 percent in Pickett County, Tenn., for instance, but ran as high as 74 percent in Washington, D.C.

Not surprisingly, Leiserowitz said opinions are shaped greatly by left-right politics and media exposure, reflected in the fact that more liberal parts of the country express greater levels of concern. What the Yale Climate Opinion Map illustrates is that even within particularly states, which tend to be viewed as politically homogeneous, there can be a great deal of variation. For instance, in Texas, the level of worry about global warming ranged from a low of 39 percent in rural King County to 61 percent in Travis County (home of notoriously progressive, liberal and “weird” Austin).

But the map doesn’t just measure worry. It also allows users to see how Americans feel about more pointed questions surrounding climate change, like whether or not they think it will impact Americans directly or if they feel it will hurt future generations. It also shows Americans’ relative stance on various global warming-related policy positions, such as government funding for renewable energy research or the implementation of carbon taxes.

“[M]ost of the decisions about climate change are happening at the state and local levels—how to reduce emissions, how to prepare for impacts, how to adapt to fundamental changes,” he said. “We hope that these results can help inform the decisions being made by individuals, companies, educators, health officials, political leaders, the media, etc. working at state and local levels.”