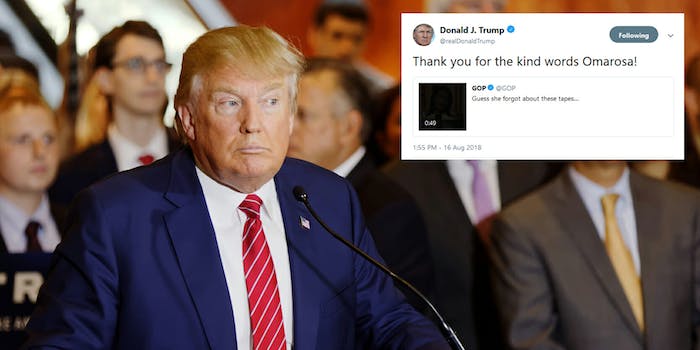 President Donald Trump continued his offensive against former administration official Omarosa Manigault Newman on Thursday by retweeting a GOP-made video that shows her showering the president with praise.

The retweet came shortly after Newman released a recording of what appears to be Laura Trump—the wife of Eric Trump—offering her a $15,000 per month job to work on Trump’s campaign. The tape is just the latest in a number of things Newman has said and tapes she has released in the past week, all of which have prompted a number of controversial responses from the president.

“Thank you for the kind words Omarosa!” the president tweeted.

Thank you for the kind words Omarosa! https://t.co/PMmNG6iIsi

The video comes as Newman released the Lara Trump tape which was played on MSNBC. In the video, which was recorded after Newman was fired, the president’s daughter-in-law implies that the former staffer needs to remain “positive.”

Newman told MSNBC she felt like the job offer was an attempt to “buy my silence, to censor me, and to pay me off.”

In the video, Lara Trump says an article in the New York Times made it sound like Newman had things “in the back pocket to pull out,” and later discusses the potential salary for the position, which would end up paying her $180,000 over 12 months.

Earlier this week, Newman shared a recording that showed the president did not know that Newman had been let go from his administration.

“Omarosa, what’s going on? I just saw on the news that you’re thinking about leaving? What happened?” he says in the recording.

When she tells Trump that Chief of Staff John Kelly fired her, the president responds: “No, I, Nobody even told me about it. You know they run a big operation, but I didn’t know it. I didn’t know that. Goddamn it.”

The former administration staffer had also claimed that the president has used racist language—to which Trump used Twitter to deny and subsequently called Newman a “dog.”