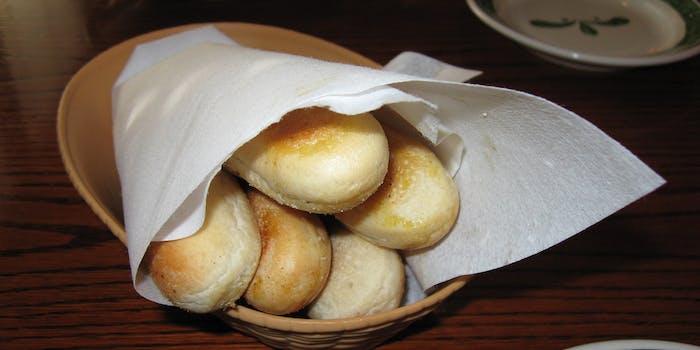 These conspiracy theories run deeper than a basket of unlimited breadsticks.

Can you taste the difference between viral marketing and organic success?

You might be justifiably suspicious if a hugely popular restaurant chain kept coming up in message board conversation. At Reddit the situation is even more extreme: Olive Garden has its own subreddit, r/unlimitedbreadsticks, devoted to the eatery’s finer points, all-you-can-eat deals prime among them. But after the emergence of a heartwarming story that reflected well on the brand, some users began to feel like the facilitators of free viral advertising.

The flashpoint for this particular controversy was a photograph of an Olive Garden receipt posted by user Tanek42 along with some context: “My brother, wife, 3 year-old daughter and I went to Olive Garden after a recent house fire at my parents. When the manager asked how everything was my daughter said ‘Grandpa’s house burned down.’” The check, when it came, showed every item as comped, with a balance of $0.00.

Skeptics came out of the woodwork to wonder why the receipt was a duplicate, how the Olive Garden logo came to be perfectly positioned in the soon-to-be-viral photo, and whether this was not a clever stunt by a restaurant manager or even branding consultant. They’ve even set up another subreddit, r/olivegardenconspiracy, initially a joke, in order to make their case. Earlier this year, a user with the handle iworkinadvertising came forward to suggest the original poster was an employee of Grey Worldwide, Olive Garden’s advertising agency.

Soon enough, however, iworkinadvertising walked back those claims, saying the receipt might not have been fake after all. Tanek42 backed up the story by linking to a report about the fire at his parents’ house as former and current Olive Garden employees noted that they were often encouraged to give certain people—returning and soon-to-deploy soldiers, for example—free meals in order to foster good will. Reporter Dan McDermott also uncovered evidence that the check and story were both authentic.

But even as the furor died down, Olive Garden conspiracy theorists were continuing down their rabbithole, with some offering “definitive proof” that Redditors had been paid to spread the restaurant’s gospel. A confessor supposedly privy to the plot, posting from a “throwaway account,” wrote: “I’m here because I didn’t get paid. And I’m pissed.”

The Admin had a simple proposition. The goal of the subreddit was to circlejerk. This isn’t a huge deal, of course. There are subs like /r/BraveryJerk, and /r/CircleJerk, etc. These subreddits have and continue to operate just fine and dandy, poking fun at trends or things on Reddit. But /r/CircleCabal had a different intention. The goal was to circlejerk about Olive Garden. It seems silly, I know, but this is where the insidious backdoor advertising thing comes into play. The people recruited into /r/CircleCabal were messaged offsite (IRC) with the promise if they could create “positive affect” with respect to Olive Garden, they would receive a payment in the form of Bitcoin. That’s it. Circlejerk about Olive Garden, talk about their tasty breadsticks, their customer service, their website, or whatever….and once Olive Garden reports back to Reddit, a small reward would be given.

That exposé was then itself attacked for being a paid, pro-Olive Garden post—or possibly just a deeply meta joke. Big_Dingus wrote that the post was “indeed a blatant advertisement for OG even as it betrays a few secrets of viral marketing.”

So how many twists does the labyrinth take? Can we believe any seemingly organic online praise for franchise food? We can argue about this stuff all day, but one thing’s for sure: I’m getting really hungry.