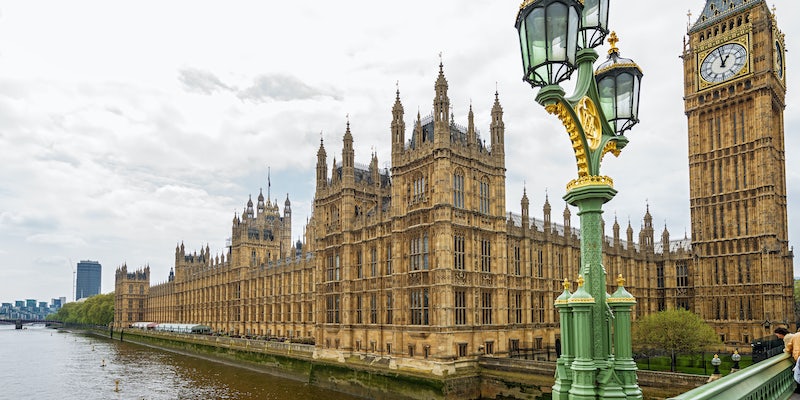 Photo via Tambako The Jaguar/Flickr (CC-BY-ND)

The attacker reportedly hit several people with a car before crashing into the gates of Westminster palace.

A British police officer was reportedly stabbed on Wednesday outside Parliament in what U.K. authorities are calling a “terrorist incident.”

According to the BBC, prior to the stabbing, the man—who has yet to be identified—crashed a car into the gate at the Palace of Westminster moments after hitting several pedestrians. At the time of publication, an official tally of the casualties had not been released.

Tom Peck, a political correspondent for the Independent, who was near the scene when the incident occurred and reported on Twitter the sound of gunshots, said that a man “well inside the palace gates” had been shot after stabbing an officer.

Several members of Parliament said they heard between 3 and 4 gunshots as well, BBC reports. Some of the MPs have reportedly been evacuated while others remain on lockdown.

There was a loud bang. Screams. Commotion. Then the sound of gunshots. Armed police everywhere.

Armed police inside Central Lobby. Hundred or so people locked in here with me. Man next to me has just fainted. It's hot and tense

In lockdown in the basement of House of Lords, praying for the safety of our brave fantastic police force, ambulance and security services

According to the Guardian, at least two women and two men were seen lying injured onWestminster bridge, where the assailant drove a car into pedestrians before ramming the palace gate.

Downing Street issued a statement confirming the safety of Prime Minister Theresa May: “The prime minister was brought back to Number 10 from Parliament. She is currently monitoring the situation.”

This story is currently developing and will be updated.

Update 12:00pm CT, March 22: In a statement, Commander BJ Harrington of the Metropolitan Police said there is an “ongoing investigation being led by the counterterrorism command” and said there are a “number of casualties, including police officers.”

Full statement by UK police on London 'terror incident': There are a number of injuries, including police officers; investigation ongoing. pic.twitter.com/5xj6TOGX4G

Update 12:33pm CT, March 22: According to SkyNews, two people are confirmed dead and a dozen injured.

Update 1:13pm CT, March 22: The Washington Post reports that one of the dead was a police officer, stabbed by the suspect. Two others are confirmed dead, and at least 20 are wounded.