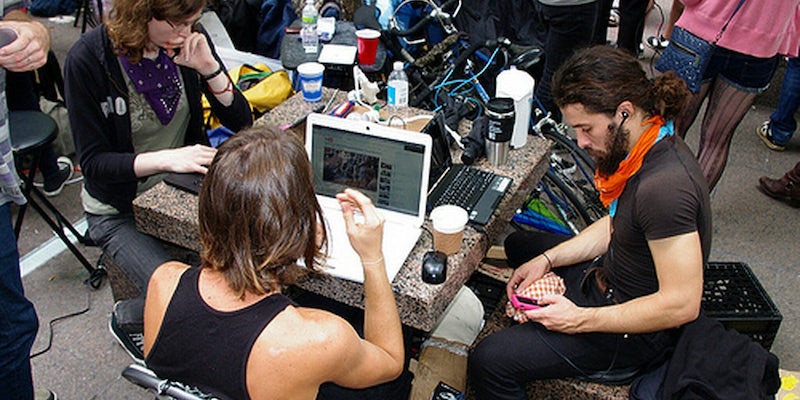 Occupy Wall Street supporters accuse Twitter of intentionally keeping their movement off the trending lists. Twitter and others say they don't censor.

Supporters of Occupy Wall Street and its numerous affiliated groups are claiming Twitter is censoring tweets to keep mentions of the protests off its “Trends” list.

“Lol #ifyoudontgivehead is trending but #ows or #occupy or #occupywallst wont lol #censor hash tags much @twitter? And really why to what end,” @DeuceBigelow420 posted on the microblogging site Wednesday morning.

It’s not the first time Twitter has been accused of tinkering with its algorithm to keep certain subjects off its main pages. In the past year, users have questioned why #wikileaks, #TroyDavis and #SteveJobs have not made it to the trends section when covergae of the subjects dominated the mainstream media.

Now, as they did in other instances where Twitter’s methods were challenged, academics and social media researchers are looking at the data. They seem to be determining that there is no broad conspiracy but simply a misunderstanding of what Twitter’s trends algorith is designed to measure.

As Tarleton Gillespie explains in Microsoft’s Social Media Collective Research blog, Trends “has been designed (and re-designed) by Twitter not to simply measure popularity, i.e. the sheer quantity of posts using a certain word or hashtag. Instead, Twitter designed the Trends algorithm to capture topics that are enjoying a surge in popularity, rising distinctly above the normal level of chatter.”

Occupy Wall Street supporters, however, didn’t see the absence of their cause on Trends as a laughing matter. And apparently, they were not convinced by Gillespie and his ilk.

As outlined in Gillespie’s post, Twitter officials have been adamant in denying the censorship charges and have pointed to the role the service played in this year’s Arab Spring uprisings in northern Africa and the Middle East. Officials, through Tweets and blog posts, have tried to explain how the Trends algorithm works and why some topics don’t trend when users expect them to.

“This week, people are wondering about WikiLeaks, with some asking if Twitter has blocked #wikileaks, #cablegate or other related topics from appearing in the list of top Trends. The answer: Absolutely not,” the company said in December when the WikiLeaks censorship charges first arose.