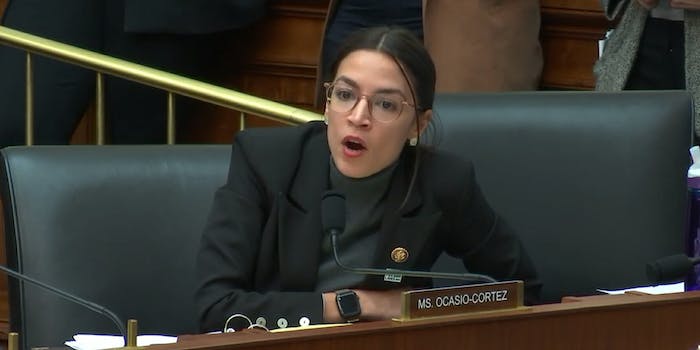 'Science should not be partisan' she said.

Rep. Alexandria Ocasio-Cortez (D-N.Y.) hit back hard at a lawmaker who mocked the Green New Deal effort as elitist on Tuesday.

The New York lawmaker made the remarks during a House Financial Services Committee meeting after Rep. Sean Duffy (R-Wis.) mocked the Green New Deal, a resolution introduced by Ocasio-Cortez and Sen. Edward Markey (D-Mass.) that aims to make changes in American society to combat climate change.

“The Green New Deal is one that if you are a rich liberal from maybe New York or California it sounds great because you can afford to retrofit your home or build a new home that has zero emissions, that is energy efficient, affordable and safe,” Duffy said, according to Fox News. “Sounds really great. But when you can barely pay the rent, or you can barely afford a mortgage—to look at the cost increases that the Green New Deal will have on poor American families, it’s absolutely outrageous.”

Duffy had tried to introduce an amendment into a homelessness bill to impose green standards into it. The New York Post notes he introduced it to vote against it.

However, Ocasio-Cortez pushed back.

“This is not an elitist issue, this is a quality of life issue. You want to tell people that their concern and their desire for clean air and clean water is elitist? Tell that to the kids in the South Bronx, which are suffering from the highest rates of childhood asthma in the country. Tell that to the families in Flint, whose kids, their blood is ascending in lead levels, their brains are damaged for the rest of their lives. Call them elitist,” she said, adding: “People are dying, they are dying, and the response across the other side of the aisle is to introduce an amendment five minutes before a hearing and a markup? This is serious. This should not be a partisan issue.”

Watch every second of this… @AOC is so incredibly spot on. pic.twitter.com/ESP4dC5TTo

The Green New Deal failed in the Senate on Tuesday as Republicans pushed for a vote in what was widely viewed as a political stunt. The measure failed 0 to 57, with many Democrats choosing to vote “present” instead.