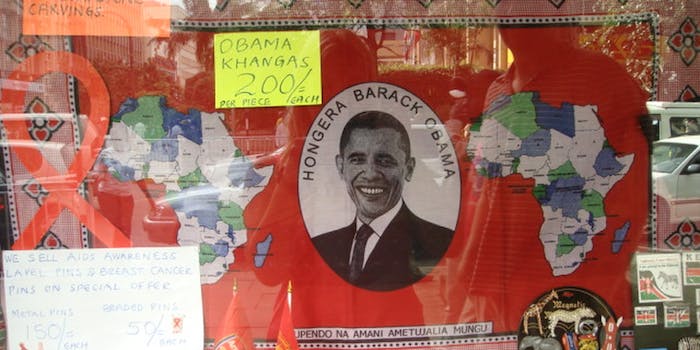 Photo via Amanderson2/FLICKR (CC BY 2.0)

'When a government gets in a habit of people treating people differently, those habits can spread.'

When President Obama planned his trip to Kenya this week, reporters asked whether he would address the country’s harsh anti-gay laws. He said he would.

On Saturday morning, at a press conference with Kenyan President Uhuru Kenyatta, Obama came through on his promise.

“When you start treating people differently not because of any harm they are doing to anybody, but because they are different, that’s the path whereby freedoms begin to erode,” Obama said at a press conference in Nairobi on Saturday. “And bad things happen.”

In Kenya, sex with a person of the same gender can result in a 14-year prison sentence—a harsh punitive reaction that also exists in many other countries on the African continent. Some of those laws are horrific, such as Uganda’s so-called “Kill the Gays” bill of 2014, which originally mandated a death sentence for LGBT Ugandans. According to the International Gay & Lesbian Human Rights Commission, more than two-thirds of African countries have laws that ban same-sex relationships and criminalize gay sex.

Ironically, Nairobi has been the central meeting point for some segments of the pan-African LGBT rights movement. In March 2014, the African conference of the International Lesbian and Gay Association (ILGA) was held in the city.

“When a government gets in a habit of people treating people differently, those habits can spread,” Obama warned at the press conference. “As an African-American, I am painfully aware of what happens when people are treated differently under the law.”

Ooh, burn. Not only did the U.S. President chastise the country of his ancestors for the way they treat LGBT people, he also bitch-slapped America for the way it treats black citizens.

As expected, Kenyatta merely shrugged off the comments, passing the buck to the Kenyan people while suggesting that homophobia was an inherent social trait.

“It is very difficult for us to be able to impose on people that which they themselves do not accept,” Kenyatta said. “This is why I repeatedly say for Kenyans today the [gay rights issue] is generally a non-issue. We want to focus on other areas.”

“I say that recognizing that there may be people who have different religious or cultural beliefs,” said Obama. “But the issue is, how does the state operate relative to people?”

On Twitter, anti-gay Kenyans mostly applauded Kenyatta for his refusal to budge on what some called “gayism” and “the gay agenda.”

Our president just nailed it on the head..Gayism is not at the foremost agenda of Kenya..Well done Mr.Kenyatta, Well done!!

Proud @UKenyatta for standing up for #kenyansmessagetoobama. We can't just throw our #morals out the window. No matter what circumstances.

Even as the homophobic comments circulated online before and during Obama’s visit, Kenya’s LGBT population took advantage of the moment and the presidential attention by addressing their own ongoing struggles.

4 as long as we've violence, hate speech perpetrated by unequal treatment it will be an issue. @oluoch @Galck_ke https://t.co/2IxaCrJQgf

Erm. So gay rights are a non issue.

Did anyone catch @POTUS' sharp intake of breath?

And Kenya’s own advocacy organization, the Gay and Lesbian Coalition of Kenya (GALCK), made sure to take part in the online conversation as well—showing that despite severe criminalization of their community and presidential shuffling, they aren’t going to back down any time soon.

#SomeoneTellUKenyatta while their is violence and discrmination, gay rights remains a priority. http://t.co/WxDXixSwYx

Photo via Amanderson2/Flickr (CC BY 2.0)