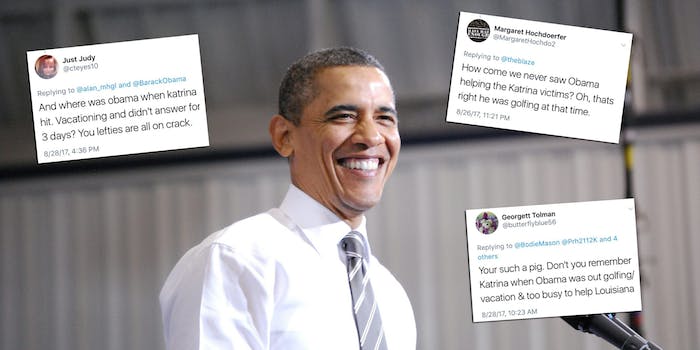 Why do people on Twitter think Obama was president during Hurricane Katrina?

That indisputable fact hasn’t stopped some Twitter users from (mistakenly) criticizing Obama for his (not real) response to Hurricane Katrina in defense of President Donald Trump, who made some bizarre statements while visiting areas just outside those affected by the flooding and damage that occurred in Texas as a result of Hurricane Harvey.

On this anniversary of #HurricaneKatrina making landfall let us never forget…

I really do not have time to look these up. Hopefully this is #fakenews. These people really didnt think Katrina happen during Obama pic.twitter.com/FWJrYfRq22

Will you please get lost. Where were you when Katrina hit, oh right, playing golf. Now you want to play president. NEVER again

3 days after Katrina, Michelle Obama was shopping.But no paper would rip her for being insensitive. Melania gets ripped for heels and a hat

If you’re asking how does someone actually fall for something so inconceivably wrong, you aren’t alone. Since the idea that Obama was president when Katrina hit in August 2005—several years before he was elected president—seems so odd, some people on Twitter are speculating that it is actually bots who are propagating the false comparison.

Twitter serving as a haven for Trump bots, or fake accounts isn’t far-fetched In fact, 2.4 million of the 5.5 million accounts that have followed Trump since May are fake or inactive, commonly referred to as “egg accounts.”

Looking at @Emjbourne’s picture of accounts tweeting about Obama’s (non-existent) response to Katrina, it makes sense that at least a fair portion of the tweets are from bots or fake accounts.

One of the accounts in the screenshots has been suspended, another only has 44 followers and has a flower arrangement as its photo, another has only 37 followers, and one has the hallmark characteristics of an “egg account”—a default profile picture and 9 followers.

The idea of bots pushing out a false idea on Twitter isn’t uncommon.

“The purpose of a bot is really to provide amplification of a message, so [there is] actually very little new information being created, or new content,”  Dora Kingsley Vertenten, a professor at the University of Southern California’s Price School of Public Policy, told the Wrap. “Most bot traffic is amplification or just repeating what’s already out there. Bots can be pre-programmed, and so they really are looking for key words or key messages or they’re set up to track somebody else, so when ‘Person A’ makes a message, the next 10 bots just repeat it.”

To sum it up, don’t believe any “Obama was golfing when Katrina struck” tweets.